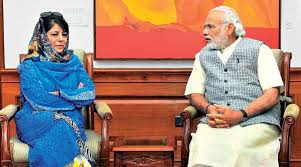 The Union Government has utilised an opportunity presented by the hearing of a petition in the Supreme Court to make it unequivocally clear that the centre is not willing to talk to the separatists of Kashmir who demand ‘Azaadi‘ (freedom).

The statement was made by the Attorney General, Mukul Rastogi, while the apex court was hearing a petition filed by Jammu and Kashmir High Court Bar Association (JKHCBA. The petitioner wanted the centre to talk to various stakeholders and consider their opinion in connection with its plea against the use of pellet guns in the state.

The stand comes across as a tough posture in dealing with the troubled circumstances prevailing in the Kashmir Valley but is, in fact, being widely perceived as a step in the right direction. Many consider this posture to be righteous and justified and something that should have happened a long time back.

The Kashmir narrative has, of late, taken a macabre turn with civil strife disrupting normal life, destroying property and leading to avoidable loss of life and limb.

More serious is the harm being caused to the young impressionable generation that is getting into conflict with the law maintaining authority in the state. The boys and girls of the valley are not only losing out on precious time for education and development, but are also getting a very wrong impression that they can take law in their own hands and get away with it.

It is well known that the Hurriyat and other separatist organisations are not in control of the situation in Kashmir which is being scripted in totality by Pakistan. Under the circumstances, it serves no purpose to speak with the Hurriyat leadership which can do no better than parroting Pakistan’s agenda of severing at least Kashmir if not the entire state of Jammu and Kashmir from the Indian Union.

It is important to give a clear message that Jammu and Kashmir is an integral part of India and no talk of its secession will be tolerated. If the people wish to make their lives miserable by indulging in social disruption, so be it. The matter will be dealt with as a law and order problem.

The centre has always maintained that it would be willing to pursue a dialogue within the framework of the Constitution. Practically speaking, there is no point in holding a discussion with the separatists until they agree to adopt the Indian Constitution and that they are not willing to do. It is for this reason that initiatives by earlier governments to hold talks yielded no results and future talks under similar circumstances will also be of no value.

By taking this seemingly “tough posture” the Government has made it very clear that the separatists, local terrorists and arsonists have no option but to relent and follow the path of civilised moderation. They need to concentrate on carving out a better life based on principles of democracy and freedom. They can either be a part of the problem or a part of the solution, the choice is theirs!

The Centre, in the meantime, is taking all necessary steps to control the situation. While the thrust is on persuasion and motivation as tools to contain the cycle of violence, there is no compromise in maintenance of law and order.  The Police and Paramilitary forces have been given the freedom to use all means to control errant protestors. The Army is carrying out determined counter terrorist operations despite the interference of stone pelting mobs.  Respect to human rights is central in the conduct of these security functions. The divisive forces, in their desperation, are increasing the threshold of violence but with no tangible gains.

Chief Minister Mehbooba Mufti has recently held meetings with Prime Minister Narendra Modi and Home Minister Rajnath Singh in Delhi. They have reposed complete trust in her leadership and have extended to her all support. Immediately on her return to Srinagar she called for a meeting of the Unified Command where she emphasised on filling the gap between security forces and people, especially Kashmiri youth, by holding regular interactions.  Apparently, she has come back from Delhi with renewed will and vigour

While the central as well as the State Government is trying to get to grips with the problem, it is very sad to note the cynical and obstructive approach being adopted by the opposition.

Ghulam Nabi Azad, instead of offering his party’s help in restoring peace in Kashmir said to the media, “As long as the PDP and the BJP government rules Jammu and Kashmir there can’t be normalcy in Kashmir.” The National Conference is also making belligerent statements while calling for sacking of incumbent government for being unable to usher peace.

These two parties seem to have forgotten that turmoil doing their time was equally intense and no solution came by despite many efforts to hold talks. The incumbent government, in application of its tough posture, has shown that it has learnt some hard lessons from the mistakes committed by the previous government and is ready to change the narrative.

It is acceptable for the opposition to talk of failures of the government to usher development, meet the objectives of its agenda of alliance, contain corruption etc. but to use the turmoil as a tool to get the government sacked is not something that any party with national interest in mind should be resorting to.

It is undeniable that Mehbooba Mufti put similar hurdles in the functioning of the Omar Abdullah led coalition government. However, for the sake of the nation and the people of Kashmir, it would not be asking too much from these parties to let bygones be bygones. It is time that the norm of regressing into soft separatism when out of power that all political parties in Kashmir follow is nipped in the bud in the larger interest of the people.

(Dr. Simrit Kahlon is an academician and a reputed Geo-political analyst)