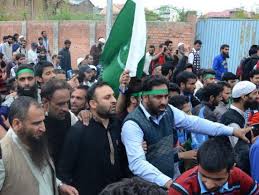 The happenings in Kashmir over the last few days have, once again, ignited apprehensions about the status of the much touted “Normality” in the state. The haste with which the new Chief Minister, Mufti Mohammad Sayeed, went about implementing his political agenda has led to a volatile situation in the valley.

The fateful rally where separatist Syed Geelani and the recently freed Masarat Alam were present, witnessed Masarat leading a chant in favour of Pakistan and some from the congregation joining in.

The first conclusion that comes to mind from the emerging situation is that Kashmir is not as secure and safe as many would like the centre and the world to believe. The apprehensions voiced by the Indian army about the possibility of cutting down on the security threshold have proved to be valid.

The Indian electronic media, by needlessly sensationalising the sensitive issues played into the hands of the separatists yet again. The Pakistan media, of course, played up the incident rather gleefully. There was talk of the Kashmiri people expressing Mohobbat (love) for Pakistan, interspersed with lucid details of the discomfiture that the incident has caused to the Indian security forces in Kashmir.

A closer look at the proceedings indicates that everything had been worked out in great detail right from the rally to the sound-bytes in Pakistan. The rally was on the social media in no time demonstrating the sophisticated media management that divisive forces in Kashmir are capable of.

It is also evident that the attack on the people of Kashmir is being orchestrated as much from within the state as from foreign soils. The unstable situation is being created by inimical powers not only by the export of terror but also through stooges within the state who have been instructed to divide and disrupt. In fact, engineering of internal dissension is emerging as the bigger, more potent prong in the evil game plan.

Pakistan is on the verge of a break up; it has nothing to offer to its own people so what can it possible offer to the Kashmiri’s. The Kashmiri’s are also are well aware of the pathetic conditions obtainable in Pakistan Occupied Kashmir and in Gilgit-Baltistan. People over there have been mercilessly subjugated, denied constitutional rights and freedom even as their rich resources are being looted with impunity.

It would be safe to infer that any break away tendencies that some Kashmiri’s may harbour do not factor in a merger with Pakistan any longer.

Most of the separatist leaders including Yasin Malik, despite being loyal fans of Pakistan, are looking at options like Azaadi (independence) and not a merger with the country. In fact, even Syed Geelani, the last standing advocate of Pakistan has been skirting the subject of late.

It can, therefore, be logically surmised that this rally and its theme was the brainchild of Masarat Alam. The old and feeble Geelani was merely roped in as a scapegoat. It was also a clarion call from Masarat Alam to declare his succession over Syed Geelani.

In all probability, the crowd in the rally constituted a few hundred dedicated “Jamaat” cadre while the rest were mere onlookers. It is the dedicated cadre that would have led the sloganeering and carried the Pakistan flag. Such a system is known to be the modus operandi of Masarat Alam; he has resurrected the same on being released. A signature of the upheavals witnessed from 2008 to 2010 is very visible here.

The rally, by no means, reflects the sentiments of a majority in the valley as some vested interests would want the world to believe.  In fact, it must have caused widespread apprehension about a revisit of the terrible days of turmoil that the common Kashmiri wishes to leave far behind.

It is sad to note that Mufti Mohammad Sayeed, despite his experience and political acumen, fell into the trap laid by Masarat Alam. Even after releasing him for whatever legal reason, Mufti should not have been so gullible as to give him such leverage. His hackles should have been raised the moment the rally was planned.

The previous chief minister, Omar Abdullah, may be faulted on many aspects but a compromise on the security front is definitely not one of them.  After the three fateful years of massive upheavals from 2008 to 2010, he got a firm grip of the security situation and did not allow it to get out of hand ever again. The normality witnessed in the valley for the last few years is the result of tremendous hard work.  His government and the security forces had created excellent intelligence assets and fool proof methods to counter anti-state conspiracies.

Omar did talk of revocation of enabling security legislations like the Disturbed Area Act and Armed Forces Special Powers Act but he was unwilling to walk the talk at the cost of compromising security, hence, the matter remained on the back burner.

The re-arrest of Masarat Alam will, at best, give a temporary respite to the state government. CM Sayeed will have to do much more to regain lost credibility. The best way forward for him is to speak less and work more on the development and stability front. He needs to realise that his political ideology is as redundant as that of the separatists so far as the Kashmiri people are concerned. They have only peace, stability and development on their minds. He also needs to realise that his coalition partner, the BJP, will find it difficult to tolerate even one more fiasco of this nature. If the situation turns for the worse in the state the people will rue the day when they voted Peoples Democratic Party (PDP) into power.

(Jasbir Sarai is an activist of Aam Aadmi Party)