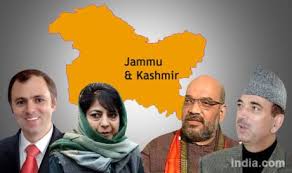 At the time of partition of the country, if the accession of Jammu and Kashmir to the Indian Union had taken place in a timely manner, Pakistan would have faced difficulty in invading J&K. Unfortunately that did not happen! By October 1947, Pakistan backed ‘Tribal invaders’ commenced their march towards Srinagar allowing Jinnah to boast that “Kashmir is in my pocket”. Concurrently Pundit Nehru pledged that, “India would hold a referendum under international auspices to determine whether the people of J&K would ultimately prefer India or Pakistan.”

The Indian Army entered the state of Jammu and Kashmir only after the Instrument of Accession was signed by Maharaja Hari Singh. As such, terming the forces as an occupation is factually incorrect.

The end state of 1947 operations resulted in Pakistan continuing with its illegal occupation of a long strip of land in western J&K and Gilgit-Balistan.  Thus, the Kashmir dispute was born.

The crux of the Kashmir problem is in the three way disagreement over the legitimate locus and the unit of sovereignty viz, Indian Kashmir, Pakistani Kashmir or an Independent Kashmir.  These are mutually exclusive and fall in two broad categories – Plebiscitary or Partitionist.

The ‘flaws’ inherent in the plebiscitary approach are the fundamental and intractable fault lines defined by nationalist, regional and communal allegiances. Pakistan has by design turned the demography of POK by inducting Punjabi Muslims, thereby reducing the Kashmiris to a minority. In the Kashmir valley, a hypothetical referendum may return a pro- independence verdict. However, in the Jammu region, a significant citizenry consisting of Hindus, Sikhs, Gujjars, Shias and Paharis would vote for India. India dismisses plebiscite as irrelevant since the people of J&K have exercised their democratic rights repeatedly.

While plebiscite and the goal of an independent reunified Kashmir are politically unrealisable, an honourable accommodation of the urge for Khudmukhtiyari (self sufficiency) is essential for resolving the dispute today.

Partitionist is a logical and opposite of the plebiscitary approach. It seeks to respond to the complexities of the problems by drawing or redrawing borders based on political continuity and sovereignty. The simplest manifestation is converting the LOC into a de jure international boundary (Musharaff – Manmohan theory). However this too seems improbable since Kashmir is the oxygen for existence of Pakistan Army, who would never let the issue die. It is evident that these three ideologically based and territorially fixated nation state perspectives lead to nothing but an impasse.

Over the years Azaadi (Freedom) continues to remain an important leitmotif for expression of Kashmiri political dissatisfaction and by 1994, the Azaadi movement reached a “crossroad.” The ideology marked the existence of two competing definitions of freedom and self determination.  Asking for Azaadi is indicative that Kashmiris don’t want merger with Pakistan. Hereafter, it was the militants trained and armed by Pakistan who assumed leadership of the Azaadi movement, but they too have failed to deliver.

Pakistan and the fundamentalists have been proactive over the last 30 years. Their latest experiment of Nizam-e-Mustafa and radicalisation of the youth has been very successful and is spinning the valley out of control. However such Frankenstein’s are known to kill its own creators, killing of Kashmiri police and Kashmiri army personnel and the stoning of their own children’s school bus in Shopian are the latest manifestations drawing an angry response from the Awaam (people).

The aspirations of the major section of the Awaam can be summed up as their desire for end of terrorism, peace, development, availability of uninterrupted essential services, higher education, return of tourism, eradication of corruption and employment besides reliable and good grass root governance.

Lack of deliverables has opened up the youth as a lucrative front to compensate for the diminishing number of foreign terrorists and dying insurgency. Majority of the youth remain confused since they aspire for a change and a desperate exit from this rot.

Considering the realities today, there is a dire need to look for a lasting and effective solution. The security forces have brought down the militancy to sub optimal levels a number of times; it was the stark absence of any political strategy that failed to exploit these opportunities. Meddling in mundane and tactical issues of abrogation of Article 370 and removal of AFSPA 1990 is a great error. Launch of political initiatives and measures instead is the way ahead.

While third party mediation on Kashmir has been and continues to be rejected by India, there is also an apparent reluctance to progress with a bilateral inter-Governmental dialogue process. A process led by an institutionalised inter-Governmental Council headed by the Prime Ministers of the two countries and comprising of top bureaucrats, diplomats, Armed Force chiefs, selected Parliamentarians, eminent citizens and top minsters of Jammu and Kashmir as well as POK could deliver results, provided India and Pakistan are able cheap rolex replica to accept the natural fallout of the division of J&K over the last 70 years on the basis of psychological cum ethno demographic changes on both sides of the LOC.

A logical action plan b may begin by declaring Jammu and Kashmir as an autonomous region with a Sadar-e-Riyasat and Wazir-e-Azam reincarnated, followed by reduction of forces (Rashtriya Rifles and CAPF) from the towns, strengthening of democratic processes/ aspirations, besides confidence building amongst the people by attending to their demands.

It is indeed a reality that the terror factory of Pakistan despite US pressures remains alive and ticking. It merits consideration that with radicalisation of Kashmiri youth in case insurgency resurges to larger dimensions, India must be prepared to exercise a final assault, the military option. A swift conventional operation into POK and Pakistan Punjab, while remaining below the bogus nuclear threshold of Pakistan to generate criticality by capturing areas and destruction of Pak Forces to end this menace for good.

The methods suggested above, particularly those which are people centric, may seem ambitious considering the entrenched antagonistic positions, yet these are viable for choosing “The Exit Policy” for the confused the desperate Kashmiri Awaam who have been let down by their leaders and by Pakistan. Until the logic of the peace process is not framed within the bounds of the universal values of Insaniyat and Insaaf (Humanity and Justice), Kashmir will remain a major global flashpoint.

(The writer hails from Kashmir and is a defence strategist. He can be reached at psmskinners@yahoo.com)