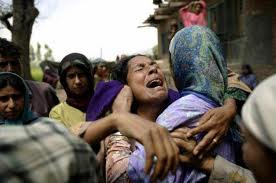 A low intensity bomb blast outside the Delhi High Court on September, 07, has raised the heckles of the Nation once again. An E-mail sent to claim that the attack was carried out by the Harkat-ul-Jihadi Islami (HuJI), a terror group that is said to have close links with both Al-Qaida and SIMI, has been traced back to Kishtwar in Jammu and Kashmir. Other E-mails from various parts of the country have also been received and all are under investigation.

Regardless of the outcome of the investigation, it cannot be denied that this incident has, once again, brought Kashmir into focus. The timing could not have been more wrong. The summer which is now coming to an end witnessed a very successful tourist season. The tourists came back to the valley in large numbers. The positive opinions of the tourists will impact the public view on Kashmir more than any advertisement campaign by the government authorities. Unfortunately, the negative publicity likely to be generated by such terror linked insinuations will negate the goodwill that has been earned.

Terrorists are very flexible people. They have the ability to exploit any and every opportunity available to them. The Indo–Bangladesh rift was dully exploited by extremists with the support of the previous Bangladeshi government. The Indo- Bangladesh border was utilised for infiltration and conduct of terrorist activities in India. The Sheikh Hasina government in Bangladesh has indicated a firm resolve to build bridges with India and, as a first step, it has come down heavily on fundamentalist and terrorist organisations operating against India from its soil. This has resulted in a considerable decrease in the flow of terror into India from that route. The result has been a visit to Bangladesh by the Indian Prime Minster Dr Manmohan Singh, which has put relations between the two countries on a very firm footing. This has not augured well for forces of terror operating against India. To overcome this adversity the focus of terror strategists has, once again, shifted to tried and tested Kashmir. The latest blast in Delhi and the possible Kishtawar link is testimony to this.

It is well known that Kashmir has the capacity to provide a good support base for extremists. It has trained sleeper cells spread across the state. There is a well laid out methodology of maintaining links across the border. The flow of men and material is contained but not totally curtailed. Indigenous recruitment is at an all time low but is still carrying on. These factors make Kashmir most suitable for planning and executing any terror activity. One must not forget the most well trained, motivated and experienced terrorists in India are active in Kashmir. They are also a role model for extremists across the nation. Whether one accepts or not, Kashmir is in the hind side of every terror activity in India.

Terror activity in India is primarily handled by ISI, whose strategists take the last call on the group to be chosen for a particular operation. The modules for attacks are selected on case to case basis depending upon its importance and intensity. Kashmir for the ISI is an important link in its terror chain. In case Kishtwar’s link with the blast in New Delhi is proved and in case proliferation of terror into the country from Jammu and Kashmir is allowed, the improving image of the State will take a solid beating.

One should not forget the due to an increase in commercial and tourist activity, movement of man and material across Kashmir into the rest of India has seen a marked increase. This also facilitates easy move of inimical forces with war like material. Terrorists are likely to take advantage of the increased activity to move out from Kashmir to the rest of India in the multifarious modes of public transport available. How many checks and balances can be put in place? There is a limit to what the Police can do.

The challenge for the people of Kashmir is to ensure the terrorism is totally eradicated from their State, this is now a matter of giving the last shove. It has been two decade now since the people have been suffering at the hands of extremism. Whole generations have grown up under the shadow of violence. The coming generations must not lose the opportunity that India presently offers. These are difficult issues, yet, the onus of resolving them lies on every one in Kashmir from the government to the people. Off course the rest of India also has a lot to do but the stakes in Kashmir are much higher. The state cannot afford to lose its share of growth and development to some disgruntled elements surviving on inimical support from across and, to an extent, within the State. Throughout India, including Kashmir, the acceptance of violence as a means of protest is declining. Democratic means has surfaced as a primary choice of protest amongst Indians. The valley has seen one of the most peaceful summers in a long time and the people’s desire to live in peace is palpable. The support base of terrorists is at an all time low. It is time for the people of Kashmir to realise the potential threat of terrorists utilising their sacred soil for evil purposes. This game plan of inimical forces has to be thwarted under all circumstances. This is possible only by sustained action of the government the security forces and the people of Kashmir.