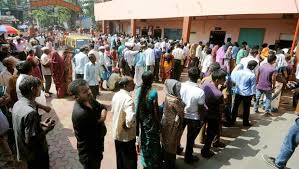 December 2:  The Second phase of polling for assembly elections in Jammu and Kashmir has commenced amid high security. In the past few days, after the first phase, terrorists have made a concerted attempt to disrupt the elections and bring about a feeling of fear among the people. A brazen infiltration and suicide attack at Arnia in Jammu region was followed by a grenade blast in Lal Chowk at Srinagar and some other incidents. A Sarpanch of the National Conference has been killed in the Kashmir valley even as others have been attacked. The terrorist have also run their usual poster campaigns and sending of messages to dissuade the people from voting.

Despite such attempts the will of the people and the nation has remained steadfast and the polls are going on as scheduled. The security forces, led by the Indian army, have left no stone unturned in containing the terrorist onslaught and have built among the people the confidence to fight the challenge and come out fearlessly to vote.

Several high-profile candidates including Sajad Lone and four state ministers are in the fray in this round. Choudhary Mohammed Ramzan, Minister for Consumer Affairs and Public Distribution is fighting the election from Handwara; Sakina Itoo, Minister for Social Welfare Minister is fighting from Noorabad; Mir Saifullah, Law and Parliamentary Affairs Minister from Kupwara and Aijaz Khan, Minister of State for Revenue from Gool Arnas.

Out of the 18 seats which will go to polls, ruling National Conference had six seats in the outgoing assembly, Congress three, PDP four, JKNPP two, BJP one, CPI(M) one and one Independent. A total of 15.35 lakh people are eligible to vote in the 18 constituencies where 175 candidates are trying their luck.

The Peoples Democratic Party (PDP) which is fighting the election on a high note and with great confidence has set an agenda to pursue ‘Self Rule’ as a framework for resolution of the Kashmir issue. Effective governance to fight corruption; rebuilding the state economy and economic and social integration of the region around Jammu and Kashmir by setting up Regional Free Trade Area and common economic market form a part of its manifesto.

The BJP is sniping on the heels of PDP for a larger stake in accordance with its stated objective of ‘Mission 44” (A complete majority in the state legislative assembly). Its agenda is fighting corruption; removal of dynastic politics and development. The party is ambivalent on the issue of abrogation of Article 370 on which it has advocated more debate at the grass roots level. The party released a vision document before this phase.

National Conference has declared opposition to any sort of “tampering” with Article 370 of the Constitution, which grants special status to the state, and pressed for the reversal of “erosion” of the constitutional provision over the years.

The Congress agenda is equitable development of the three regions of the state; constitution of two fully empowered regional councils with separate development councils operating under the umbrella of regional councils (one for Chenab Valley and another for Pir Panjal Valley) and a review of cases of detainees not involved in grave offences.

The entire world is looking at the election which is a representation of democratic principles at their best and a manifestation of the courage of the people to stand up for their freedom despite great risk to their lives. Even the Pakistan media has not found any reason to question the election process as it used to earlier.  The free and fair manner in which the election process is progressing is yet another feather in the cap of the Indian democracy.