The Union Territory (UT) of Jammu and Kashmir (JK), as in the case of all other regions of the country, is totally committed to the fight against the deadly COVID virus. The fight is being spearheaded by the Government of the UT with complete support of the people. Standing firm with the Government and the people in this hour of need is the Indian Armed Forces, especially the Indian Army. The Indian Armed Forces are providing assistance in meeting this deadly challenge across the nation; in  JK, however, the involvement is more pronounced due to the long standing bond between the people and the soldiers as well as the presence of the Army in the remote areas where administration is a bit weak.

On June 10, the Defence Research and Development Organisation (DRDO), which is a part of the Union Ministry of Defence, handed over to the UT Government a 500-bed Covid-19 facility in Jammu. The inauguration was done by Lieutenant Governor Manoj Sinha on 13 June. The facility has  125 ICU beds; remaining beds have provision for round the clock oxygen. Apart from the medical equipment required to meet emergencies the hospital has an in-house pharmacy, diagnostic infrastructure, X-ray, and CT scan.

A month earlier, in May, 2021, the Indian Army operationalised a 250 bed “Dedicated COVID Health Care Centre” at the JAK LI centre in Rangreth, Srinagar. The facility was created in record time in response to the COVID surge in Srinagar. It has a 20 bed state-of-art high dependency unit and a 230 bed post-critical care ward. It also has all modern equipment like ICU beds, Laboratory,  X-Ray machines etc.

Service in all facilities created by the Army will be provided by the health department and admission will be on the recommendation of the health services. They have augmented the Government medical health infrastructure significantly.

Jammu and Kashmir has many remote areas where the hand of the administration reaches with difficulty. To  meet emergencies in such areas, the UT Government has created Panchayat COVID Care Centres. These 5-bedded care centres are being run with the assistance of the Panchayat and block development council members. They are equipped with basic isolation facilities like bed, water, medicines, masks, and gloves. Medical advice is being given telephonically and through mobiles. Patients can even contact doctors through helpline members, serious cases are referred to primary health centres and community health centres through seamless linkages.  “We have devised an effective and rapid response system to quickly mobilise the physical and human resources within the healthcare delivery apparatus,” said Lieutenant Governor Manoj Sinha in reference to the Panchayat centres. 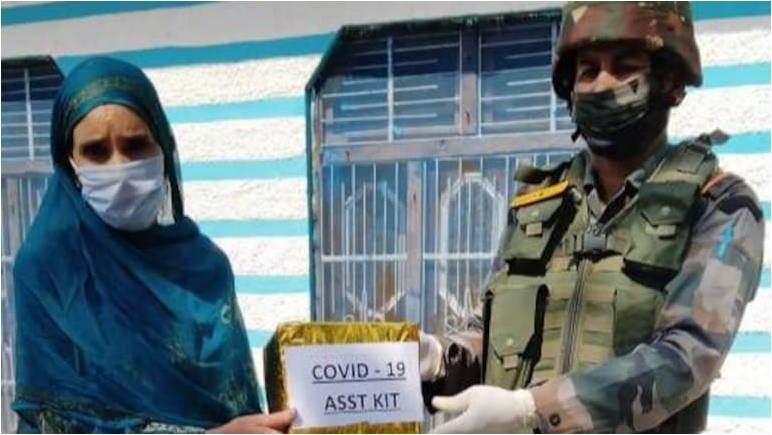 Mission Reach Out of Indian Army

Another significant initiative that has paid handsome dividends is conduct of an awareness campaign at a massive scale. All Government officials in the field have been involved in this, especially the Asha and Anganwadi workers. The Lieutenant Governor personally gives a message to all residents to follow COVID-appropriate behaviour in all of his interactions. He advises people to wear face masks and maintain social distance, in order to effectively tackle the pandemic. He also urges the people to follow all COVID protocols and give priority to vaccination.  This message is an almost daily affair; its consistency is producing good results.

The Army too has been carrying out massive information and awareness campaigns. It has been conducting medical patrolling whereby activities like pasting of posters, holding lectures, distribution of face masks are carried out. In a novel initiative it has incorporated  religious leaders in the awareness campaign and has also used Drones for messaging; in both initiatives it has gained excellent results. Now that timely vaccination is top priority, the Army has not only organised medical camps in collaboration with the local Community Health Centre, but has also been motivating the people to come forward and take the jabs.

Any study of the state effort towards containing COVID would remain incomplete without mention of the contribution being made by the many individual volunteers, community groups and Non-Government Organisations (NGOs). Despite being cash strapped and lacking in facilities, such resources have stepped out to provide ambulance services, oxygen support, free medical advice and food etc. They have, in particular, looked after the elderly and those without support. NGOs like Social Reforms Organisation (SRO), Help Poor Voluntary Trust (HPVT), Athrout  (to name a few) etc have made a sterling contribution; there are many others spread out across the UT.

The Government of India has authorised members of Parliament to reallocate Rs 2.5 crore of MPLAD funds for COVID mitigation efforts in their constituencies . It is hoped that this amount will be used by the members of parliament of the UT in an effective manner.

The collective effort as elucidated above has kept the fatality rate of COVID-19 in Jammu and Kashmir lower as compared to other states in the country. This has been stated by Dr. Ashiq Rashid Mir, Surveillance Medical Officer of the World Health Organisation. Mir said that over 1,30,000 patients have recovered in Kashmir and another 80,000 have recovered in Jammu, which is an encouraging sign and that with the cooperation of the people, the impact of the pandemic has been subdued to a large extent.

While the Government, the people and the Indian Army are putting their best foot forward to save precious lives, the terrorists are attempting to take advantage of the situation to push their evil and nefarious activities. The Army, however, is not allowing them the luxury of leveraging the emergency conditions for spreading violence. Counter-terrorist operations continue in a relentless and incisive manner as before.

Due to collective effort, the disease is under control in JK. There is, however, no room for complacency. It has to be ensured that the infection curve remains flat. A third wave is expected and it will be more lethal than the previous two. The people can help by observing  laid down safety and medical protocols. The Government should maintain  the momentum in building medical facilities while also maintaining those that are presently available.

(The author is a senior journalist and social worker)