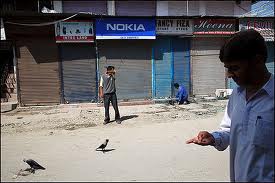 It is very interesting to see the manner in which the separatists are playing out their cards post their futile meeting with Sartaj Aziz, advisor to Pakistan Prime Minister Nawaz Sharif on foreign affairs and national security, at New Delhi on November, 10.

After the meeting and on reaching the relative safety of his residence in Srinagar, Syed Geelani grandly commented that the gun remains an option for resolution of the so–called Kashmir dispute. “When Indian was fighting against the British rule, on one side (Mahatma) Gandhi propagated peaceful struggle and on the second, there was Bhagat Singh, who used violent means to achieve the freedom. India accepts Bhagat Singh as a martyr,” said Geelani to some local news service. If he had said this in New Delhi itself shoes would have been rained upon him.

Even as Geelani was advocating the cult of violence his colleagues in the separatist camp were making desperate attempts to open some door for talks with the central government. They went to the extent of approaching persons like ex-RAW Chief, AS Dulat, Prem Shankar Jha and even the Satish Lamba, advisor to Prime Minister Manmohan Singh, with broad hints towards revival of “Track-II” dialogue to facilitate a meeting with the Government.

Now what does one make of this Jekyll and Hyde act? While Syed Geelani goes about talking of violence, Mirwaiz Umar Farooq speaks of dialogue. It looks as if the separatists wish to equate their posturing with the freedom struggle of out great country with Geelani playing the role of Bhagat Singh or Subash Chander Bose and Mirwaz Umar Farooq coming across as Mahatma Gandhi. This is not the first time the separatists have tried to associate their so-called “struggle” with well-known freedom movements across the world. On earlier occasions Palestine, Ireland and other such movements have been freely invoked in comparison. This is a chosen line to establish their otherwise shaky credentials. They want the world to believe the ludicrous notion that that they are fighting for freedom when it is quite evident to one and all that Kashmir is enjoying the fruits of freedom and democracy at par with the rest of India. Such vague political posturing is beyond the realm of logic; sadly, it involves the future of a traumatised people who are suffering immeasurably because of such stupidities.

While building on the “Gun culture” comment made by Syed Geelani his supporters are trying to create an impression that local youth have taken and continue to take the path of violence due to frustration caused by faulty political dealing of Kashmir issue by the Indian Union. It would be worthwhile to reiterate over here that the small segment of indigenous militancy that cropped up in Jammu and Kashmir due to false propaganda and indoctrination by Pakistan has been rendered redundant since long. The terrorists now operating in the Kashmir valley are wholly of foreign origin and sponsored by our inimical neighbour -Pakistan. The very Pakistani leaders whom the separatists eagerly meet at the slightest opportunity, hat in hand and begging bowl in place, are the ones who are using terror to cause untold damage and loss to their own people – the Kashmiris.

These terrorists have killed many thousands of innocents, raped women, destroyed property and government infrastructure and done everything in their power to subjugate the people. That they have been unsuccessful in achieving their objective of wresting the region away from India is primarily because of the will of the people to protect their freedom at all costs and the unrelenting efforts of the security forces. The Kashmiri people would never want a revisit of the ‘Gun culture’ that they have defeated with tremendous effort and sacrifice; this is something that Geelani should realise before making loose statements.

Syed Geelani has the temerity of equating himself and his cronies with the likes of the great Bhagat Singh and Mahatma Gandhi; what needs to be realised is that if India had shown even an iota of the ruthlessness that the British did towards Indian freedom fighters the likes of Geelani would have been dead or incarcerated a long time back. Here he is being kept alive with state care and medical treatment. Some people can be so ungrateful.

The reality is that the Hurriyat conglomerate has lost its political relevance. It faces the wrath of the people because of constant disruption of normal life that takes place due to the frequent calls for Hartals and Bandhs. It stands exposed as a loose group of self serving politicians who are pursuing an issue that is long since dead and redundant. A major reason behind continuing on the path of dissension is the funding that these leaders receive from foreign sources through Pakistan. As things stand now this source also stands jeopardised. It does not take rocket science to understand that with the Nawaz Sharif government coming into power the Hurriyat does not hold the central place with Pakistan that it enjoyed during the times of Pervez Musharraf and Asif Ali Zardari led PPP. The alacrity with which Hurriyat leaders started hunting for a means to engage the Government of India is an indicator of the negative vibes of their meeting with Sartaj Aziz.

The Hurriyat conglomerate must realise that it cannot move forward with the Jekyll and Hyde tactics that it is following. The Government of India is fully aware of the precarious position that the Hurriyat is in presently and will not be taken in by such mindless bluster. The best option for the Hurriyat is to join the electoral process and raise such issues that are in consonance with the true aspirations of the people. There is a chance that, while treading on this path, it will find the central government more forthcoming to address its genuine aspirations. This is the only way that it can maintain its relevance in Kashmir.