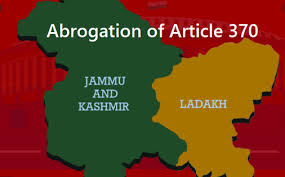 It is one year since the historic decision taken by the Indian Union, through an act of parliament, to reorganise the state of Jammu and Kashmir into two union territories of Jammu Kashmir and Ladakh respectively and also abrogation of Article 370 and Article 35A. The decision has been heralded as bold and dynamic, of benefit to the Nation as well as the people of the region. It is being seen, specifically, as a tool for fast paced development and the attendant prosperity. There are also a few negative perceptions doing the rounds which are mostly the result of anti-national vested interests.  Such efforts have been relegated to oblivion due to absolute acceptance of the new dispensation by the people. On the occasion of the first anniversary of this bold decision it would be pertinent to dwell on the benefits that have already accrued and those which are likely to accrue in the long run.

One major aspect that the erstwhile state of Jammu and Kashmir was suffering from was the non-applicability of many central legislations, central schemes and welfare initiatives in the state. All progressive laws passed by the parliament, over the years, for the benefit and welfare of people could not be extended to J&K, thereby, denying the people their due. Presently, all of these are applicable in J&K and they have brought about positive changes. The most significant fields where positive change has been witnessed are listed below.

Right to Education Act has led to a paradigm increase in the number of government aided education institutions and infrastructure in the Union Territory.

National Commission for Minorities will henceforth safeguard the interest of minority communities that suffered terribly under the previous dispensations.

Land Acquisition Bill will streamline the process of sale and purchase of land and also lead to higher circle rates and hence more land value. After independence land prices across India increased rapidly, but not in J&K.

Multiple Disability Act will greatly benefit marginalised segments of the society that were left dependent on efforts of Non Government Organisations for much needed relief.

Maintenance and Welfare of Senior Citizen Act is essential for every evolving society, yet, it had no equivalent in the State laws; its application will give great relief to the senior citizens.

Delimitation Bill is, by far, the most significant aspect. It will remove the existing inequalities in representation of the different and diverse regions of the Union Territory and thus allow equitable flow of political power.

National Commission for Safai Karmchari will extend to the lower strata of society like the Balmiki Community and provide to them rights of domicile and assured employment among other welfare packages that have been denied to them.

Political Reservations for Tribals and Dalits will give necessary protection to these backward groups.

Removal of Article 370 has opened the door for promulgation in JK of Articles 73 & 74 of the Indian Constitution that facilitates and empowers Panchayats all over India. It will lead to direct funding to Panchayats from central funds and will fuel local growth and prosperity which, till now, was hostage to the mercies of a few families.

There are many provisions for empowerment of women passed by the Parliament which were not applicable to the women of J&K. The same have been extended to the state and have brought its women at par with their counterparts in the rest of the country.

Scores of central welfare schemes were not applied to Jammu and Kashmir; they have been introduced now to the benefit of the people.

Anti-corruption laws applicable in the rest of the country were not applicable here, resulting in large scale corruption. This rampant corruption will now end and people will be the biggest beneficiaries.

All the factors that gave a fillip to terrorism and social disruption have been curtailed and the region is well on the way to total peace.

It has become quite apparent now that Article 370 and 35A were handy tools in the hands of mischievous elements. These two articles had kept the state isolated and away from the development processes in the country for a long time and benefited only a select few so-called leaders. As a result, despite massive fund allotment by the centre, there was only limited improvement in the living condition of the poor and disadvantaged due to lack of accountability.  This is now changing.

In the near future, under the new dispensation, investors will pump in resources. World class health care providers will open their franchises and will bring in the best health care right at the door steps of the local people. Higher education all across the country has witnessed a boom which eluded J&K. Now this sector will grow due to the PPP model and will broaden the horizon of the students of the Union Territory.  Big educational institutes will proliferate. Industry could never get a foothold in J&K due to non-applicability of so many business enabling laws. Now, it will get a boost. The opening up of the economy will see the advent of multi-national corporations (MNCs). Ecology/environment saving provisions will apply and natural beauty will be preserved.

All these things will combine together to generate jobs and there will be a major enhancement in employment opportunities. Corporate Social Responsibility (CSR) projects will increase thus opening more vistas for employment and growth. All of this will increase the threshold of job satisfaction and levels of prosperity thus leading to economic development.

The monumental changes that have been witnessed in just one year are a harbinger of the good times yet to come. There will be a news dawn in JK as the region moves forward to integrate seamlessly with India and the world. In a few years hence, most of the problems which have been preventing Kashmir from realising its true potential will go away and a world of opportunities will open up.

(Dr. Simrit Kahlon is an academician and a social worker)