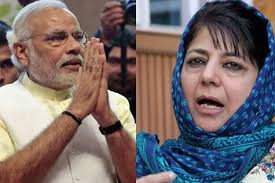 It is heartening to see the government at the centre and at the state level in Jammu and Kashmir exhibit a rare confidence in dealing with the situation in trouble torn Kashmir. Undoubtedly, there is political and social pressure accentuated by a shrill media, but it has not deterred the government from pursuing a well laid out policy and consistent posture with a transparent approach. One gets an impression that the government is quite sure of getting the desired result of ushering peace and development in the trouble torn region sooner than later.

While, on the one hand, the government has given an open ended sanction to the security forces to eliminate the cult of terrorism and tackle violence and disruption with a firm hand, on the other hand, it is pursuing its development agenda aggressively.

Self sufficiency has emerged as the mainstay of the development process in Jammu and Kashmir and more so in the Kashmir Valley.  Gainful employment and empowerment at the grass roots are the conduits that have been identified to steer this process to its logical conclusion.

The military, political and diplomatic misadventures that Pakistan has a proclivity to indulge in are receiving great punishment along the line of control. Massive artillery and missile fire along with aggressive response to ceasefire violations have put its head down and also reduced levels of infiltration of terrorists.

The Pakistan Army is desperate to stop the massive punishment being meted out by Indian forces along the LOC and has spoken in this regard quite openly with the Indian Army’s Director General of Military Operations (DGMO). This, after Pakistani media reports based on figures provided by the country’s National Disaster Management Agency (NDMA), have come out with alarming figures of the casualties being suffered due to Indian firing. More than 800 Pakistani soldiers have been killed in this firing, according to the NDMA report.

The remnants of terrorism in the hinterland of the Kashmir Valley are being actively engaging and eliminated despite all odds. Counter-terrorist operations in the hinterland in Kashmir spearheaded by the Indian Army and conducted with complete support of Jammu Kashmir Police (JKP) and paramilitary forces have witnessed astounding results.

Reports suggest that more than 90 terrorists, including senior commanders of the LeT and Hizbul Mujahedeen, have been eliminated in this year itself of which a major number have been killed in the last month and a half. The intention of clearing the region of the scourge of terrorism before the end of this year is quite visible.

When terrorists of local origin come in the dragnet of the security forces, people gather into a crowd, pelt stones and interfere in the operation in a desperate bid to save them. The security forces have complete sanction from the government to carry on with their work regardless of this interference. Pressure from the media and other political avenues is not being allowed to play on the minds of the security forces in pursuance of their duties.  Of course, standard operating procedures are in place to keep the locals at bay while ensuring their safety.

In the realm of dialogue the government has, despite pressure from many quarters, maintain a righteous stand of not opening talks with separatist, secessionist and criminal elements on their terms. Of course, the door has been kept open for reasonable dialogue but only if there is a doable agenda on the table.

On the diplomatic front, Prime Minister Narendra Modi has successfully convinced world leaders to come together in the fight against terrorism and Pakistan has been universally identified as the chief global sponsor of terror. Pakistan, as such, is becoming quite isolated worldwide as its perfidy gets exposed more and more.

Declaration of Syed Sallahuddin as a global terrorist by the US has come as a very big blow for Pakistan.

Sallahuddin, a Kashmiri Muslim from Srinagar based in Pakistan Occupied Jammu and Kashmir (POJK), is since long being used by Pakistan’s notorious Inter Services Intelligence (ISI) as a stooge to further sponsorship of terrorism in Jammu and Kashmir.

At the behest of his masters, he has recently gone ballistic on Pakistani television to say that his being declared a global terrorist by the US would make no difference.  He and his masters have clearly missed the woods for the trees! His being declared a global terrorist does not make any difference to his status which is that of a stooge and a spent force. It, however, reinforces the stigma on Pakistan of harbouring terrorists. By boasting that he can spread terror in India at will, Sallahuddin is harming the interest of Pakistan all the more.

India has received unequivocal support from Israel in her fight against Pakistan sponsored terror during the recent visit of Prime Minister Narendra Modi to the country. This is yet another huge diplomatic blow to Pakistan.

Quite clearly, the government has the will and determination to take the battle into the enemy’s turf while exposing the duplicity on those who nurture anti-national ideologies

A segment of the media is trying its level best to derail the initiative of the government. A sustained campaign is in place to denounce the same as tough and inflexible. It is for the better that the government has chosen to ignore the diatribe and carry on with its firm, unambiguous and righteous policy which is, most importantly, producing the desired results on ground. The negative campaign which is eliciting great public outrage will die down sooner than later.

Gone are the days when the government, the separatists, the terrorist and Pakistan had their individual space; none interfered with the other and each held on to his turf. The government today is has charted a path that meets the aspirations of the people by providing to them what them need the most – peace and development. An ability to sustain its confidence is bound to reap good results..