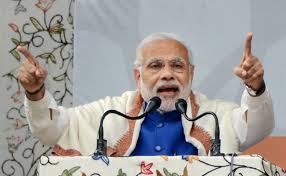 Prime Minister Narendra Modi went to Kashmir on 07 November 2015 and addressed a rally in Srinagar. This was his fourth visit to the state since he became Prime Minister; he has probably not gone to his constituency in Varanasi so many times. This is a clear indication of the priority that the state of Jammu and Kashmir holds for him.

During the rally he spoke from his heart and reached out to the people; he invoked their abiding relationship with the rest of the country and emphasised upon the importance of Kashmiriyat in the idea of India.

It is very sad that some in Kashmir have chosen to look at his sentiments with negativity and cynicism. This is, of course, an expected reaction from certain quarters that hold an anti-nation posture. However, deep down one always has a hope that politics in Kashmir will be played out with some degree of honour.

In an immature attempt to create an ideological wedge within the ranks of the Bharatiya Janata Party (BJP), an attempt has been made to paint PM Modi as a villain and the erstwhile Prime Minister, Shri Atal Bihari Vajpayee, as the true champion of the Kashmiri people. Separatists, their paid intelligentsia and paid media in Kashmir were seen falling over each other while singing paeans about Shri Atal Bihari Vajpayee’s political vision for Kashmir.

It is a fact that Shri Atal Bihari Vajpayee took a statesmanlike approach to the Kashmir imbroglio and walked the extra mile to meet voices of dissent. The question that arises is – why did the separatists not grab the opportunity to resolve all issues at the point in time?

In 2004, when the Hurriyat leaders were in talks with the then Deputy Prime Minister LK Advani, they requested for a meeting with the Prime Minister; the request was honoured and a courtesy call was organised. What happened after that? Did the Hurriyat try to build bridges? The answer is a big NO!  Instead, the Hurriyat flaunted the meeting as capitulation of the government at the centre. Their objective was to derive some brownie points from the meeting to impress their foreign masters.

Under the circumstances the best option is to build the economic potential of the region and its people which would, at least, benefit the people while their highly confused so-called leaders take their time to decide as to what they exactly want!!

There are a thousand indicators towards the fact that the common Kashmiri has opted for Kashmiriyat, Jamooriat aur Insaniyat (Secularism, democracy and humanity) as propounded by Shri Atal Bihari Vajpayee and strongly reiterated by PM Modi. The sad part is that the separatists are not ready to see even one of them. They have blinkers on and are not willing to shed their rigid path to go where their own people wish to go.

Having found nothing in the speech made by PM Modi in Srinagar that could be targeted by their abrasive paid media, the disruptive elements caught hold of one insignificant comment and tried to distort it to their advantage.

When PM Modi said that he does not need any advice or analysis from anyone he meant that he was close enough to the Kashmiri people to understand their sentiments and aspirations. The childish attempt to use these words to create a rift between the Prime Minster and Chief Minister Mufti Mohammad Sayeed was pathetic to say the least.

PM Modi and CM Sayeed are seasoned leaders who will not fall into such a third rate trap. Those who tried to exploit this comment for some political advantage only exhibited their lack of acumen and intellect.

With the security situation well in control the time is now ripe to usher fast paced development in Jammu and Kashmir in a manner that makes the people of the region a part and parcel of the Indian success story. PM Modi and Chief Minister Sayeed fully understand the need of the hour and have responded to it in the right manner. Jammu and Kashmir is on the roll and what is now required is to maintain the momentum.  So far as the separatists are concerned, it is best to ignore their whining.