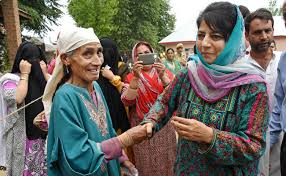 The Anantnag by-polls on 22 June were significant since Chief Minister Mehbooba Mufti was fighting the election in a constituency earlier represented by her deceased father and former chief minister, Mufti Mohammad Sayeed.

After a muted start, polling picked up in the evening. A mere four per cent turnout was recorded during the first one hour. The final count stood at around 34 percent with women voters registering a predominant presence. At the polling station in Khanabal High School in Anantnag town, “Burqa” clad women formed the bulk of voters.

The result, which was declared on 25 June, was on expected lines with Mehbooba registering more than double the votes polled by her two main opponents joined together.

According to reports Mehbooba polled 17701 votes while her nearest rival Hilal Shah of the Congress bagged 5616 votes. Iftikhar Misger of the National Conference got a measly 2881 votes.

The margin is quite impressive given that fact that the late Mufti Mohammad Sayeed registered a win with a much smaller margin of 6000 votes in the December 2014 assembly polls.

What is disquieting is the low voter turnout which stands at 34 percent. This very constituency in December 2014 registered a voter turnout of 40 percent.

It is also notable that Ghulam Nabi Azad of the Congress party, during the by polls on becoming chief minister of the state won the election in Bhaderwah with a massive 58000 vote margin.

The verdict of an election of this nature gives legitimacy to the government, especially so, in a sensitive state like Jammu and Kashmir. PDP, therefore, should have pulled all stops in getting a massive mandate for its leader. To that extent, the election cannot be termed as a resounding success.

The silver lining is that despite the voting being less than expected, the peaceful and transparent manner in which the process was conducted comes across as a great success for the coalition government that Mehbooba is heading.

A larger voter turnout in the rural areas as compared to the urban segments indicates the aspiration for democracy and development at the grassroots feel.

There are multiple reasons that attribute to the low voter turnout. Many may have shunned political activity in the holy month of Ramadan; others would have considered the victory of Mehbooba a foregone conclusion and decided against investing their time in the poll process.

Separatists and terrorist groups had called for a complete boycott of the polls. The appeal had come from the top leadership including Mirwaiz Umar Farooq, Syed Ali Shah Geelani and Yasin Malik. There was a complete shutdown in Anantnag town following the boycott call.

A notable rise in terrorist initiated violence in South Kashmir districts during the build up to the By-polls, with specific targeting of police personnel, constituted significant pressure tactics by anti-national forces to scuttle the election.

The fear psychosis generated by the separatists was the reason behind the low voter turnout in the morning. The people, it seems, watched the situation before coming out to vote. However, barring an incident of stone pelting in old Anantnag town the polls went off peacefully and the separatists got a proverbial “slap on their faces.”

On the day of the election the separatist cadre was nowhere to be seen. This clearly reflects their tenuous position on ground. They are very good at giving threats but when it comes to converting them into action they invariably back out. It is time for the Kashmir people to understand this duplicity.

It also seems that that, in actuality, separatists want a government in place. If there is no government then who will they target?

Credit goes to the security forces and the state administration who oversaw a smooth election despite the high political stakes involved.

Despite soft peddling by the PDP the separatists did everything in their power to scuttle Mehbooba’s chances of winning the polls.  They have been exposed as devoid of any sense of loyalty and self serving to the core. PDP should now shed its soft corner for the separatists and stop propping-up their anarchical and anti-state policies.

The result of the polls will set the pace for politics and governance in the state. The contention that the BJP-PDP coalition has created widespread isolation for the PDP in the valley has turned out to be nothing more than a myth. The people, it is very clear, want political stability. They wish to give the incumbent coalition a chance to prove itself.

Another political tool being used by the opposition to bring Mehbooba down is her supposed inability to get the Armed Forces Special Powers Act (AFSPA) removed in the state. The election result has clearly established that revocation of AFSPA is not that much a life and death issue for the Kashmir people as it is made out to be. Mehbooba is being wise in not tampering the counter terrorism paradigm.

The people realise the necessity of continuance of AFSPA in view of the enhanced terrorist activity in the state. The numbers of the terrorist cadre may have dwindled but the capacity of the remnants to strike has not diminished; hence, the need for an enabled security environment.

Mehbooba Mufti is now firmly ensconced as chief minister of the state. She has enough time at her disposal to prove herself. She knows that the opposition is biting at her heels, ready to strike at the smallest opportunity. She therefore needs to implement the promise of good governance and development in double quick time. The proof of the pudding will lie in the eating.

In view of the great pressure that terrorist forces are exerting in the physical and psychological domain, security should remain the top priority of the government. The attack on the CRPF convoy is a grim reminder of the need to stay ever vigilant and prepared. It is in this direction that Mehbooba should pay maximum attention.