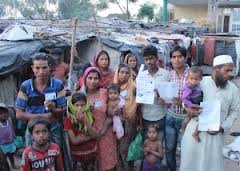 The United Nations established a commission on human rights in 1946 with Eleanor Roosevelt as its chairperson. The commission drafted the Declaration of Human Rights which received unanimous approval from the member states on December, 10, 1948. It was through this document that the UN defined the qualities of a decent standard of living for all people everywhere. The document contains 30 articles which explain the specific rights to which all people are entitled without distinction for race, colour, sex, language, religion, political opinion, national and social origin, property, birth or any other status. Every year, on December, 10, the world celebrates Human Rights Day to commemorate the great occasion.

India has always given a shining example of extending the human rights charter within the country while being its energetic advocate globally. Sadly, the plight of the refugees in the state of Jammu and Kashmir stands out like a sore thumb. The hapless Hindu refugee’s who entered Jammu and Kashmir at the time of partition from district Sialkot, numbering more the 2.5 lakhs today, reside in villages from Kathua to Pallanwalla on the border belt of Jammu. They have been deprived of even the rudimentary facets of human rights. In the past six plus decades, since independence of the country, they have not been given the status of a state subject in Jammu and Kashmir. Three generations have, therefore, been denied basic human rights like the right of nationality, ownership of property, political empowerment education and all other such aspect that epitomize human rights and are implemented with exemplary zeal across India. Being non-state subjects they cannot get government employment or even own a ration card. Quite naturally, they have no voting rights whatsoever. What is even more distressing for them is that their brethren who went on to settle in other parts of India are doing extremely well; a good example being Dr Manmohan Singh, the Prime Minister of India.

In real terms this translates into becoming a people without an identity; non-existent aliens in the land. The situation of these refugees goes against the specific provisions of the articles of the Declaration of Human Rights referred to above and many other aspects contained in the document. Clearly, these deprived, disempowered people are victims of human rights violations due to state apathy and that too despite several strictures from the Supreme Court of the country to ameliorate their pitiable plight.

The shaky human rights record of Jammu and Kashmir does not end here. Human rights violation of the Kashmiri Pundit community is a very live and vibrant aspect. The Kashmiri Pundit community was driven out of their homes nearly three decades ago by foreign terrorists and their sold out indigenous sponsors in the name of religion and Jihad. Today, even as the state government makes loud professions of normalcy having revisited the Kashmir valley, the struggle of these hapless people to get back to their homeland does not seem to be going anywhere. They continue to exist without an identity.

There are others who have been displaced due to terrorism and whose voice is not being heard at all. Prominent among these are families of the minority community from the hills south of the Pir Panjal who were forced to leave their home and hearth due to threat to life in the hands of terrorists during the peak of terrorism. Their properties in their home towns have been forcibly occupied and as of now they have no place to go. They continue to lead a miserable life in shanty type refugee camps while an apathetic government shows no will to ameliorate their suffering.

It cannot be denied that, in the Kashmir valley, there are many facets of human rights violations perpetrated upon innocent people due to foreign sponsored terrorism; there is a need to address the same with urgency. At the same time, the aspects of internal displacement cannot be driven out of the reckoning.

India makes a big noise about being the most enduring champion of human rights. The country has gone out of its way to help the Tibetans in their just fight against Chinese repression. Tibetan exiles have been given refuge in India and are extended all civil and civic facilities. In the backdrop of this high moral threshold it is distressing to note the indifference being shown to the country’s citizens in Jammu and Kashmir. The displaced people are suffering tremendously and their voice needs to be heard urgently. Attention has to be paid to those who have stoically stuck to their roots despite insurmountable odds and saved the region, the country and the society from disintegration. Each and every attempt to drive focus away from the actual issues needs to be exposed for its fallacy and motivated intentions. They cannot be allowed to continue suffering due to no fault of theirs. They need to be identified, acknowledged and provided with the much needed succour. It is the responsibility of the government both at the centre and the state to ensure that this abrasion in the national moral fibre is removed once and for all.