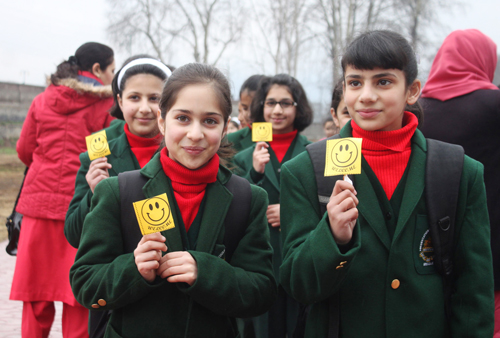 The killing of three local terrorists in a recent encounter in Kashmir, including one who was a B.Tech student has, once again, laid focus on the very significant issue of indoctrination of the youth on to the path of radicalisation.  The resultant propulsion towards the mindless, self defeating and fatalist path of terrorism is tearing apart the Kashmir society and negating all efforts towards ushering peace in the trouble torn region.

Eesa Fazili, a B. Tech graduate was killed in an encounter in Kashmir’s Anantnag District a few days back. He had embarked on the path of terrorism less than a year back in August, 2017. His shelf life as a so-called Mujahedeen was only for a few months and he died an ignominious death, as is the case in most such instances.

Fazili had the education to lead a prosperous and purposeful life. There was so much that he could have done for his family, the society and most importantly for his own self.

As a citizen of a vibrant democracy, he had the liberty to pursue his political beliefs. There was no need whatsoever for him to follow the path of violence. When he had the world at his feet, he chose to forego everything on the alter of a misplaced belief.

Fazili had the misfortune of being driven by a Pan-Islamic ideology. The question that arises here is as to who was responsible for pushing him onto a path that is wholly alien to his culture and his society; his family, the society or the political environment of the region?

Family and the society have a huge role to play. Adolescents across the world have growing up blues!! There are issues like lack of self confidence and self esteem, insecurity etc. to deal with.

In Kashmir, the teenagers hear their elders incessantly cribbing against the government and the country. They hear eulogising of terrorists like Burhan Wani by Maulanas’ (Religious heads) and other senior citizens of the society.

On being subjected to such negative thoughts the young boys are devastated. They end up getting swayed by the conversations and are attracted towards revolutionary ideas. Changing the situation becomes high on their agenda and violence comes across as the best method to do so.

The inimical foreign forces operating in Kashmir have developed a winning model of exploiting such vulnerabilities of the youth and guiding them on to the wholly destructive path of so-called revolution – a Jihad (holy war) for attaining so-called Azaadi (Freedom).

The matter has gained an even more critical dimension of late. It is very distressing to see small children in Kashmir talk of Mujahedeen and Jihad and such like things that they have no knowledge of. The internet is full of videos of this nature. While the elders pass it off as normal and even find the conversations animating, they do not realise the immense damage that is being done to the psyche of the child.

The storm created recently by a simple statement by Haseeb Drabu, a senior leader of the ruling People’s Democratic Party (PDP) speaks volumes about the warped narrative being followed by the political leadership of the region.

Drabu was dropped from the council of ministers for saying that the Kashmir is not a political issue. “It (J&K) is not a political issue as far as I can see. They have been barking up the wrong tree for the last 50 or 70 years by talking about the politics of it, and the political situation has never improved. We seriously need to look at in terms of how it (Kashmir) is a society that is in search of itself,” he said. This was enough for his party leader, Mehbooba Mufti, to sack him.

The sacking clearly indicates the arrogance of the political leadership that puts itself before the very people and society that they profess to represent. For the political leaders, their self serving concepts starting with self-rule and autonomy and going all the way up to Azaadi (Freedom) and merger with Pakistan are of prime importance. They are hardly bothered about the effect that such abrasiveness has on the youth of the region.

There cannot be social stability in an environment of political turmoil, hence, the politicians are also responsible for the cobwebs that develop in the minds of the young boys and lead them astray.

Maximum blame for the fragile state of the youth in Kashmir which causes frustration, anger and bitterness can be apportioned onto the parents, family members, civil society and the political leadership. Sadly, this failure to keep the youth on the right path leads to a small segment taking to violence and terrorism.

Violence on religious grounds is quite alien to the Sufi culture of Kashmir. It is a recent entry into the socio- political landscape introduced by imported fundamentalist concepts of Islam.

Religious fundamentalism has put relationships under stress; it has already brought about an insurmountable divide in the otherwise seamless, homogeneous relationship between the Kashmir Pundit and Kashmiri Muslim communities of the valley. Now even the Muslim population is getting sucked into a vortex of self destruction. It is time to save the valley from debilitating ideas and ideologies that can benefit only those who wish to exploit and subjugate the god gifted region.

Democracy in India gives its people the right to follow their religious beliefs; the problem arises when these beliefs are misused by some to raise passions and bring about a divide in the social fabric of the society. Such attempts need to be challenged with all possible means, especially so, in a sensitive region like the Kashmir valley. A conscious effort has to be made to change the negative perceptions that some parts of the Kashmir society harbours due to relentless propaganda by forces of evil. The leaders and elders of the region need to take initiative in this direction.

(Dr. Simrit Kahlon is an academician and a social analyst of repute)