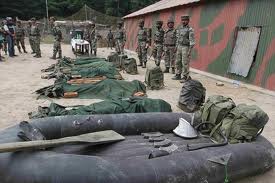 12 militants were killed in North Kashmir on Saturday, August, 20, in the biggest infiltration attempt from Pakistan this year. An young Army Officer, Lieutenant Navdeep Singh, was killed and two army Jawans were injured in the day-long gun battle in the Gurez sector of Bandipora district. The infiltration attempt was foiled when a group of militants tried to cross the Line of Control (LoC) near the Kishanganga River. The boats that were used for the bid were similar to those used in the 26/11 Mumbai attacks. Five AK-47 rifles, a pistol, two boats, 50 grenades, two radio sets, two compasses and a global positioning system device were recovered. Combing operation in the neighbouring forests went on till late evening since the Army feared that it had been a group of 17 militants. Just a day later, there was a fresh infiltration attempt from across the LoC in the Poonch sector early on Sunday, August, 21. One terrorist was reportedly killed in the encounter but his body was taken away by his colleagues. Infiltration attempts along the LoC have increased in recent with as many as nine incidents reported in the month already.

These incidents are a clear indication of Pakistan’s duplicity while dealing with the proliferation of terror on Indian soil. The language spoken by diplomacy is not translated into credible action on ground. Indian security forces need to step up vigilance in the face of irrefutable evidence of Pakistani intentions to up the ante in Kashmir so far as terrorism is concerned.

The Nation mourns the martyrdom of its worthy son, Lieutenant Navdeep Singh, who had only four months service in the Army. One is saddened by this avoidable loss of life that is the result of evil intentions of our neighbour.