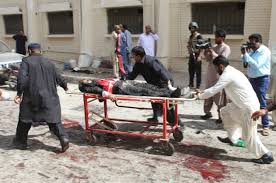 Pakistan High Commissioner to India, Abdul Basit, during the celebrations of his country’s 70th Independence Day, has given yet another demonstration of his governments over riding interest in Kashmir, regardless of the same being immoral and dishonourable.

The posture taken by Abdul Basit is in line with the policy of the government of Pakistan to keep the pot of terrorism and unrest boiling in the Kashmir Valley, with complete disregard to the negative impact that the same has on the Sun-continent.

Even as the Pakistani leadership is shedding crocodile tears for the people of Kashmir, Quetta, the capital of the Province of Baluchistan has witnessed the deadliest attack in its long history of violence.

More than 70 people, mostly lawyers, were killed and more than a hundred wounded in a suicide attack by terrorists that targeted mourners gathered at a state-run hospital, on 8 August.

Even as the province is reeling under the impact of the vast tragedy that has literally wiped out its legal fraternity, another attack on 13 August has left 17 people seriously injured.

The Government of Pakistan, instead of concentrating its energy towards containing the adverse situation in its largest province is engaged in its evil agenda of interfering in the internal events of its neighbouring country, India.

This act of the Pakistani leadership comes across and most callous and boorish; evidently Prime Minister Nawaz Sharif does not know what his priorities should be.

Pakistan attempted to put the blame of the terrorist attack on India. There were, however, many voices within Pakistan itself that were not ready to buy this argument. Mehmood Khan Achakzai, chief of Pakhtunkhwa Milli Awami Party, while speaking about the attack said that, “Pointing fingers only at Indian RAW would not sail the country s boat in the war on terror.”

Further, ISIS and well as Pakistan Taliban claimed responsibility for the terror attack to the eternal embarrassment of the Pakistani regime.

Experts are of the opinion that such terror attacks in Pakistan are on the upswing mainly because of the policy of the government to classify terrorists are “good and bad.” It is common knowledge that violence in Baluchistan is sponsored by both the state as well as fundamentalist Islamic terrorist organisations.

This selective approach has been roundly criticised across the media and intellectual spectrum of Pakistan. An editorial in The Express Tribune, a leading English daily newspaper of Pakistan says, “No surprise because governments provincial and federal despite their trumpeting as to how many casualties they have suffered fighting terrorism — have been highly selective in the terrorists they choose to fight. It was not so long ago that a senior federal government figure was justifying the narrow bandwidth in regarding the fight against terror because of fears about ‘blowback’ if pressure on terrorist groups was increased.”

The perfidy of the government with regard to the fringe provinces and occupied territories does not end here. The situation in Pakistan Occupied Kashmir (POK) is even more nauseating.

Government of Pakistan has conducted yet another sham of an election in POK.  Whenever such sham elections are held, the party which is ruling in Islamabad invariably emerges as the winner; the result of the recent elections declared on July 21 was no different.

The election was brazenly rigged and the ruling Pakistan Muslim League-Nawaz (PML-N) bagged 31 seats out of the 41 seats for which direct elections were held. The outgoing PPP got a measly two seats while All Jammu and Kashmir Muslim Conference (AJKMC) and Pakistan Tehreek-e-Insaf (PTI) had to be content with 3 seats each. Others just fell on the sidelines.
Immediately after the results were announced the people took to the streets in vast numbers shouting slogans against Nawaz Sharif, the Government of Pakistan and the infamous Inter Services Intelligence (ISI). People openly held ISI responsible for the rigging. Violence was reported in many places even as the Army and the Rangers moved swiftly and ruthlessly to subdue the agitated people.

At the end nothing came of the valiant effort of the people and the majority will was, once again, stifled by the state authority. Information did not come out since the region was closed to media scrutiny as is the routine.

Prime Minister Narendra Modi has, very rightly, taken on the mantle of not only exposing Pakistan’s duplicity in Kashmir but also to focus the attention of the world on the gross violation of human rights and repression that the people of Baluchistan and Pakistan Occupied Jammu and Kashmir are facing.

These regions are in the throes of a massive humanitarian crisis towards which the attention of the world needs to be focused. Pakistan hand in engineering of a huge propaganda campaign in Kashmir to mislead the young impressionable boys and engineer violence also needs to be exposed to the world.

The proactive approach adopted by the Modi government is a step in the right direction. In fact, it should have been taken a lot earlier but then, better late than never. What is important now is to not lose steam and press this matter to its logical conclusion as fast as is possible. Pakistan needs to be reigned in before irreparable damage to done to the Indian sub-continent.

(Jasbir Sarai is an AAP activist and a columnist)