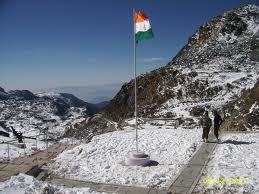 Chinese troops are reported to have entered into Indian territory and destroyed some old bunkers and tents in the Chumar division of Nyoma tehsil, in Leh. There were some reports of an aerial ingress by the Chinese in helicopters while other say that the helicopters landed in Chinese territory and the troops came in on foot to destroy the bunkers. This action has been taken by the Chinese forces to send a clear cut message of their claim over the said area. Even as reports of increased Chinese belligerence are doing the rounds, we have indications of the governments vacillation in implementation of a plan to considerably beef up India military presence along the North-Eastern borders with China in Arunachal Pradesh and Sikkim. The ministry of Finance has developed cold feet in sanctioning the raising of a new strike Corps in the said area. More astounding is the reservation expressed by the Ministry of Environment towards construction of an alternate all weather route from Siliguri to North Sikkim. Clearly, India has completely forgotten the humiliation of 1962 and is now preparing for yet another military drubbing by the Chinese in the near future. In 1962, the country was nascent and weak, hence, the defeat was absorbed. In case something similar happens now the consequences will be disastrous for the Nation. Somebody has to tell the Babus to lay off from this most important project