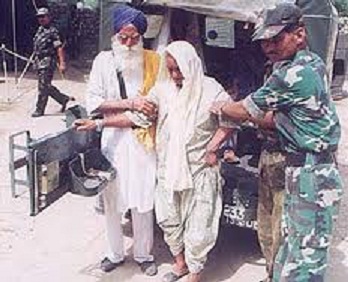 The Indian Army is, without doubt, one of the largest if not ‘the’ largest single functional organisation in the country. With a huge resource of trained man power it has the capacity to deal with almost any kind of situation both in times of peace as well as in situations of civic and military emergencies. A most recent example of such a situation emerging was just prior to the Commonwealth Games when the army was requested to step in and complete ventures in a time bound and effective manner where the civil bodies, for whatever reason, had failed to deliver. It goes to the credit of the organisation that it managed to preserve both national honour and pride. The stellar role performed by the Indian army during times of natural calamities such as the Kashmir earthquake or the Ladakh cloudburst is no less praiseworthy.

The success of the army in dealing with a variety of exigent situations hinges upon the broad spectrum of trained man power that it possesses. This includes a very adept engineering wing that specialises in building roads, laying bridges and rebuilding infrastructure in emergency situations be these created by war or natural calamity. The armed forces medical services also play a sterling role both in peace and war. These are only two examples drawn from a whole range of abilities that the Indian army possesses and is often asked to press into action in the service of the nation.

The Army is supposed to be used minimally in the civil sphere in keeping with the democratic traditions of our country. In recent times, however, it has been called upon rather frequently to step in and supplement the efforts of the civil administration in controlling emergent situations. This has led to a more visible role for the men of the Indian army in the civil sphere.

The Army’s role in counter insurgency operations is a very visible example in this regard. Despite the fact that counter insurgency operations do not encompass the traditional role of the army as protectors of the country’s frontiers, yet the force has been called upon to perform this very sensitive task. It has managed to deal with this changed role in a remarkable manner.

The success attained by the Army has been the result of functioning in complete synchronisation with the civil administration and being extremely humane and sympathetic while dealing with the local population of the area suffering from insurgency. At the same time it yields no quarter to the hard core terrorists, militants or insurgents who are, in fact, chips of the same block.

A major advantage, that normally goes unnoticed, is the perceptible boost that the army provides to the faltering economy of the insurgency affected and terrorist inflicted areas. During times of civil disturbance, the major sufferer apart from the women and children is the economy of the region. Trade and commerce takes a beating due to the prevalent insecurity and political uncertainty, investment in basic infrastructure takes a massive dip and employment opportunities become almost non-existent.

It is during such trying circumstances that the Indian army through its sheer presence provides a fillip to the economy of that area. The mere day to day logistics of a stationed force and the provision of materials such as food, clothing and fuel serve as a major sustenance for the economy. For ancillary services, the armed forces frequently look towards the civilian population. Such services may range from transportation to daily provisions. Even workers in the informal sector ranging from the porters to the workers in the roadside ‘dhaba’ offering tea and snacks are being economically sustained by the Armed forces.

The Indian Army has a long standing tradition of initiating a variety of developmental works in the area where its troops are located. These works could vary from something as simple as clearing the road of snow to something as complex as building a tunnel through a mountain to improve connectivity. In all such works the area get a development fillip and the civilian population also finds employment. In fact, there are a number of examples of geographically and economically disadvantaged locations where the army proves to be the engine of economic growth. Places like Ladakh and Gurez amongst many other in Jammu and Kashmir and regions like Tawang in Arunachal Pradesh are prime examples where the economy is sustained primarily by of the presence of the army.

In such areas, the army, because of strategic reasons keeps communication channels open despite hostile weather and physiography and this proves to be an indirect blessing to the people and economy. It is thanks to the Border Roads Organisation of the Army that the Leh- Manali highway across the Rohtang Pass and Srinagar-Leh highway across the famous Zozila Pass remains in a motor able condition for a considerable part of the year and people of Ladakh are able to associate with the rest of the country, maintain the flow of tourism and rest assured about the availability of essential commodities required to see them through the harsh winter. Not only that, during the winter when the tourist inflow dries up it is the Indian army and servicing of its requirements that keeps the economy of such regions in some sort of a functional state.

The Indian army thus serves as both a direct and indirect sentinel for the economy of the country in both insurgency affected and geographically remote areas of the country. The State of Jammu and Kashmir is a beneficiary on both counts. It has benefitted vastly due to this economic catalyst particularly in regions that have slow economic growth.