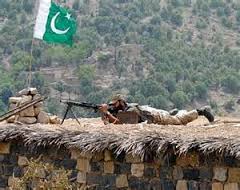 Diwali is traditionally celebrated by the Pakistan army with a fervour that far exceeds what is seen in India. While in India the celebrations entail bursting of crackers, the Pakistan army rains artillery shells on the border areas of Jammu and Kashmir and derives great pleasure in causing untold misery to the hapless inhabitants of the area during the festive season.

This time has been no different; in fact, in view of the successful surgical strikes carried out by the Indian Army, the execution of its evil designs is far more intense.

Infiltration attempts and cross border firing that was going on unabated ever since the surgical strike, gained momentum a little before Diwali and peaked on the eve of the festival.

Over 60 ceasefire violations have taken place since the Indian Army undertook the surgical strikes; infiltration bids are taking place on a daily basis.

During an infiltration bid along the line of control on October, 28, two days before Diwali, some terrorists succeeded in killing an Indian soldier, Sepoy Mandeep Singh and mutilating his body before escaping into POK. A day earlier Riflemen Sandeep Singh Rawat died a hero’s death while successfully foiling an infiltration bid in the Kupwara sector.

The entire world joined India in expressing disgust for these inhumane acts. The Indian Army, on its part, did not take very long to extract revenge. The very next day four Pakistani posts were subject to direct artillery fire and destroyed completely. It is assessed that more than 40 Pakistani soldiers died in the counter operation.

The face off in the Machil sector served as a reason for a free for all during Diwali. On October, 30, Pakistani rangers with assistance from their regular forces violated the ceasefire all along the Line of Control (LOC) and International Border (IB) in areas south of the Pir Panjal. The targeted areas mainly included Rajauri, Samba, Kathua and RS Pura among other Jammu Districts; firing with small arms, mortars and artillery was resorted to.

It is so obvious that the intention was to target such areas that have a sizeable Hindu population.

On November, 1, a day after Diwali, eight innocent civilians, including two children, were reported killed and 22 injured due to this immoral firing. An Indian soldier Rifleman Bimal Tamang also lost his life at Rajaouri due to the Artillery shelling

Even during a hot war scenario soldiers respect the religious sentiments of their adversaries, such is the universal tradition of the profession of arms. But then, military honour is quite alien to the Pakistan Army, especially its generals.

Quite naturally, Pakistan’s decadent action invited a strong reaction by the Indian forces in which 14 Pakistani posts were razed to the ground and two Pakistani soldiers were reported killed.

Pakistan, in its usual deceitful manner launched a diplomatic offensive to cover up its immoral activities. Its foreign office had the gumption of casting allegations of cease fire violations by the Indian Army along the IB.

The Indian Ministry of External Affairs (MEA) strongly rejected the allegations and emphasised that Indian troops never initiate or violate ceasefire, they only retaliate.

The MEA spokesperson, Vikas Swaroop, further added that two third of the violations this year have taken place in the past five weeks indicating that Pakistan has taken a conscious decision to scale up the violence levels against the Indian state of Jammu and Kashmir.

Another big reason behind the incessant firing along the IB in the Jammu region is that this area is traditionally scaled up for infiltration activity at this time of the year, since infiltration routes in Kashmir start shutting down due to snow. The same pattern is emerging this year also.

Over the last two weeks or so, as many as ten infiltration bids have been foiled by the BSF in Hiranagar, Kathua and adjoining areas of the Jammu region. Reports suggest that three bids were made on and immediately before the Diwali night. Obviously, the enemy wished to take advantage of a drop in vigil due to the festive atmosphere; he did not, however, take into account the professionalism of the Indian security forces.

The consistent ceasefire violation is causing immense hardship to the people residing along the border areas. In Jammu they have been forced to leave their houses and are staying in camps. Chief Minister Mehbooba Mufti is personally monitoring the situation while the government is trying its level best to ameliorate the suffering of the people by making provision for food, bedding etc in these camps

However, issues like education of children and tending to the crops at a time when harvesting season has started are causing great concern. At the end of it all, many innocent people will suffer due to the entirely unnecessary malevolence being exhibited by Pakistan.

Pakistan’s pig-headedness, sadly, his here to stay; the policy of conflict with India that the country is pursuing since its inception is not likely to change anytime soon. In fact, the position may become more hardened and fundamentalist with time.

India, therefore, has no option but to meet the challenge head on while constantly attempting to drive some sense into the obtuse thought process of the country’s leadership. In the meantime, maintenance if a high threshold of security vigil and capability of response is an absolute imperative.

Along with containing Pakistan sponsored violence it is also important to wean away the people of Jammu and Kashmir from the massive propaganda campaign that Pakistan has unleashed to mislead the people of the state, especially the youth. For this, trust and faith of the people needs to be secured with some positive political initiatives. If the people see through Pakistan’s evil designs and reject them, 70 percent of the battle would be won.

The incoming winter offers a great opportunity to the Mehbooba Mufti led coalition government to make headway in this direction. It is hoped that this opportunity will not be lost.

(Dr. Simrit Kahlon is an academician with an abiding interest in J&K)