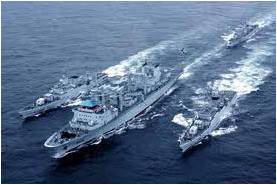 Simple facts of the two fastest growing economies of the world amply show that the Chinese dragon is way ahead of the Indian elephant. The two Asian giants, share a 4,250-kilometre border and trade goods and services in excess of $60 billion every year. But when it comes to slights, perceived or otherwise, Beijing’s memory is elephantine. India has given sanctuary to the Dalai Lama since 1959 and harbours more than 130,000 Tibetan refugees. In return, China has helped India’s rival, Pakistan, acquire nuclear weapons and missile systems. It has also blocked India’s membership in the UN Security Council and fought to the last minute, in 2008, to prevent the lifting of restrictions on nuclear trade with India.

The underpinning facts of Chinese economy overwhelm those of India’s. In 2011, China’s GDP grew at 9.2%, whereas India was at 7%; India’s average inflation rate for 2011 was 9%, whereas China’s was less than 6%; India’s unemployment rate was 9%,as compared to China’s 4%; India’s credit rating is BBB, whereas that of China’s is AA; this is one reason, why India’s overseas funds withdrew a net $380 million in 2011 compared to record inflows of $29 billion in 2010. China has $3 trillion in foreign exchange reserves, whereas India had only $314 billion as of 2011. The only area where India has a reason to smile is their domestic consumption. In 2009, China’s retail sales were $360 billion, which is just 25% more than that of India’s. This can also be interpreted as China’s huge unexploited potential in its domestic market.

China’s annual appetite for steel consumption was 868% more than India’s in 2010; its energy consumption is 598% more. Now China’s economic growth is paying off; in 2010 the country had more than 200 billionaires, compared to 69 in India. China spent around $192 billion in public health, whereas India spends only $65 billion; life expectancy is 75 years in China as compared to 65 in India. The gap is widening for most social indicators of living standards such as infant mortality rate, mean years of schooling, immunization coverage etc. Whereas India’s research and development is yet to make a dent even locally, 12.3% of residential patents registered in the world in 2011 were from China, pointing towards its emergence as a world leader in innovation.

Over the last decade, China’s competitive spirit has resulted in a mad rush by world industries to enter the country and partake a piece of the development pie. Recently, the world was taken aback with China’s announcement of sending astronauts to the moon and launching a well designed space station, this when USA is abandoning its own. In 2018, China will overtake USA as the world’s largest economy. Interestingly, India is nowhere near the two.

What is even more worrisome is the axis of sorts that is emerging between China, North Korea and Myanmar, which is detrimental to India’s interests. Today, 87% of Myanmar’s investments come from China, focused on strategic projects such as energy and natural resources. Chinese corporations are involved in 90 hydropower, mining and oil and gas projects across Myanmar. The Chinese aim seems to be procuring gas and oil for its landlocked southern Yunnan province. China’s real intentions can be gauged from the fact that while the US imposed sanctions on the import of precious stones from Myanmar, China’s presence in that country’s gem mining and export industry soared. Like in the case of North Korea, Myanmar has emerged as one of China’s closest allies in recent years. The suspected North Korea-Myanmar nuclear link is a potential destabilizing factor. US Secretary of State, Hillary Clinton, had expressed concerns regarding this development during a visit to Phuket in July 2009. As in the case with North Korea, some military officers in Myanmar have defected to other countries and revealed startling details about the military junta’s nuclear weapons development programmes. However, Myanmar is not yet appropriately positioned to launch such a programme due to lack of technology and resources.

Given the importance of China in India’s foreign policy, our leaders must understand Beijing well. One way to improve this is to interact with Taiwanese scholars who are considered the best China watchers as no other country conducts as extensive and intensive research on China as they do. Secondly, there can be mutually beneficial exchanges of information between the intelligence agencies and militaries of the two countries, on a range of issues. Similar exchanges take place between the Taiwanese agencies and their counterparts in the US, South Korea and Japan, to name a few. Thirdly, there is tremendous scope for economic cooperation between India and Taiwan, which, now, is not progressing much because of what Taipei terms as, “Reluctance on New Delhi’s part to speed up the process towards the conclusion of bilateral agreements on investment protection and avoidance of double taxation”. An MEA-promoted theory is that India cannot behave normally with Taiwan since China can react by fishing in the troubled waters of Kashmir. Nothing can be more bizarre than this comparison of Kashmir with Taiwan. True, Beijing may not like it, but then in the overall national interest, cultivating relations with another country must not be made hostage to the Beijing factor, if Japan and South Korea can do it, why not India.

While experts concur on both the Chinese and Pakistani threats, the big issue is do we have the luxury to wait for the elephant to grow and in the process get devoured by the Dragon? India’s emphasis should now be on economic development. At the same time, it needs to build the necessary diplomatic firewalls and, more importantly, the required military might to counter inimical and hostile designs that China conjures up in the future.