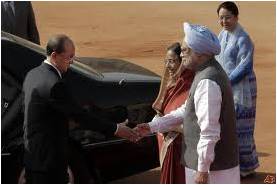 In a first by an Indian Prime Minister in 25 years, Manmohan Singh will be visiting Myanmar, starting May, 27. He will hold talks with President Thein Sein on May, 28, followed by a meeting with Aung San Suu Kyi to discuss Myanmar’s ongoing transformation into a full-fledged democracy. Considering the geostrategic significance of the resource rich Myanmar, the visit has much at stake for India’s regional standing.

Only last month, Suu Kyi’s National League for Democracy (NLD) became the main opposition party in Myanmar’s Parliament, thus paving the way for the formation of a democratic nation. That Suu Kyi has been able to bend the military junta is an unexpected, yet historic, development as is the change over in the military junta; they have swapped their military uniform for civilian suits, released political prisoners, signed ceasefires, relaxed media censorship and opened a direct dialogue with Suu Kyi.

With Myanmar’s new government taking tentative steps towards democracy, space for an enhanced Indian role in Myanmar now opens up. Its rulers may also turn to India for its experience in building democratic institutions. This thought is cemented by the recent visit to India by President Thein Sein, for the first time in several decades. Thein Sein is reportedly a moderate and keen on reform. He is solely responsible for the resurrection of Suu Kyi as a part of his inclusive and reconciliatory policy. This apart, his government has granted amnesty to about 200 political prisoners, ended restrictions on the internet and lifted the ban on trade union activity, in an attempt at confidence building.

Two decades ago, India was amongst the most vociferous champions of Myanmar’s pro-democracy movement. Following the brutal suppression of mass protests in 1988 and in the wake of the landslide victory of NLD in the 1990 elections, it sharply rebuked the military rulers and called for a handover of power to the elected party. For some years thereafter, its diplomatic efforts were focused on pushing for restoration of democracy in the country. Then from the mid-1990s it changed tack; counter-insurgency operations in the Northeast, interest in Myanmar’s natural resources as well as China’s growing influence in Myanmar forced it to engage with the Generals, rather than confront them.

Now, apart from economic and security cooperation India is looking at a people-centric relationship with the country. As K Yhome, research fellow at the Observer Research Foundation, told Asia Times Online “India is now beginning to broaden this engagement to include cooperation and capacity-building in health, agriculture and education”. Recently, India has announced a US $ 500 million credit line to Myanmar, its largest ever, for specific projects, including irrigation. This is in addition to the $ 300 million credit extended last year towards construction of railways, roads, power transmission lines and oil refineries. The areas of India-Myanmar cooperation can now be expected to expand further, to include democratic institution-building, capacity building, people-to-people contacts etc.

Other global powers are also looking towards engaging the resurrecting Myanmar. In 2009, the Obama government sent out feelers to Myanmar as a first step to counter China’s influence. Suu Kyi is cautiously backing a US senator’s proposal to suspend economic sanctions. She holds an opinion that suspending, rather than eliminating, sanctions would send a message that the US is trying to help the country move towards credible democracy. Many business units in USA are hopeful that the doors of resource rich Myanmar would open for trade soon. They see “An incredible opportunity in this Asian economy, untouched by the developed countries for the last forty years”.

It is the China factor which India should be looking at with great level-headedness. The authoritarian governments of China and Myanmar have traditionally been doing business in closed-door deals on arms sales and mega projects that critics now say, are laced with corruption. When Myanmar was isolated by international sanctions, China was its main foreign investor and benefactor. It fully leveraged the advantage of proximity over a long border. It has the potential of plowing in billions of dollars; something that both India and the US cannot compete with.

Yet, there are signs that point towards Myanmar seeking to reduce its dependence on China. The Thein Sein government recently suspended a $ 3.6 billion Myitsone dam project that China was constructing in Kachin State. This is the first time since the two became close allies in 1988 that Myanmar has snubbed Beijing. Myanmar’s military, despite close ties with Beijing post-1988, distrust the Chinese. Many in the Myanmar army were involved in fighting the Burmese Communist Party’s armed insurgency for decades. They have not forgotten China’s role in nurturing and fueling that insurgency. It is not just the military that is suspicious of China; the public too, holds similar feelings, especially in towns like Mandalay. The Myitsone divide can be an indication that Myanmar is looking for other partners, a role which can be fulfilled by New Delhi. To what extent India will benefit from Myanmar’s reported distancing from Beijing depends on how serious the rift is. Many, however, believe that the suspension is just eyewash, aimed at signaling to the world that the new government is responsive to people’s sentiments.

It can be logically surmised that conditions for an expansion in India’s role in Myanmar are ripe and there is every reason to seize this opportunity. It is likely that the bilateral bond will deepen in the coming years, should it move towards democracy. However, India’s glacial pace in executing projects coupled with erratic delivery schedules may not be able to stand the pressure of competitive assertiveness by China in particular and other countries in general. It is such challenges which will mark the relationship between the two neighbours. It should not so happen that India becomes its own worst enemy in Myanmar.