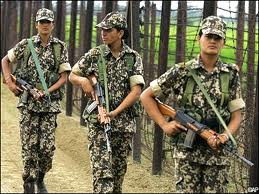 India and Bangladesh have inked a key agreement aimed at enhancing quality of border management and ensuring cross-frontier security through measures like joint vigils to deal with human trafficking and smuggling of drugs and weapons. The comprehensive border management agreement was signed in the presence of visiting Home Minister P Chidambaram and his Bangladeshi counterpart Sahara Khatun. The agreement, signed by Border Guard Bangladesh’s Director General Maj General Anwar Hossain and his Indian counterpart from the Border Security Force Raman Srivastava, is expected to resolve all outstanding frontier issues, including combating cross-border crimes. India and Bangladesh share 4,096 km border, of which 6.1 km is still un-demarcated.

Contiguous to this development is the need to progress on the concept of ‘One border, one force” in order to ensure the essential requirements of generating “cohesion, coordination and synergy”. This concept has also been recommended by the Group of Ministers report on “Reforming the National Security System” that says, “multiplicity of forces on the same border has inevitably led to lack of accountability as well as problems of command and control”.