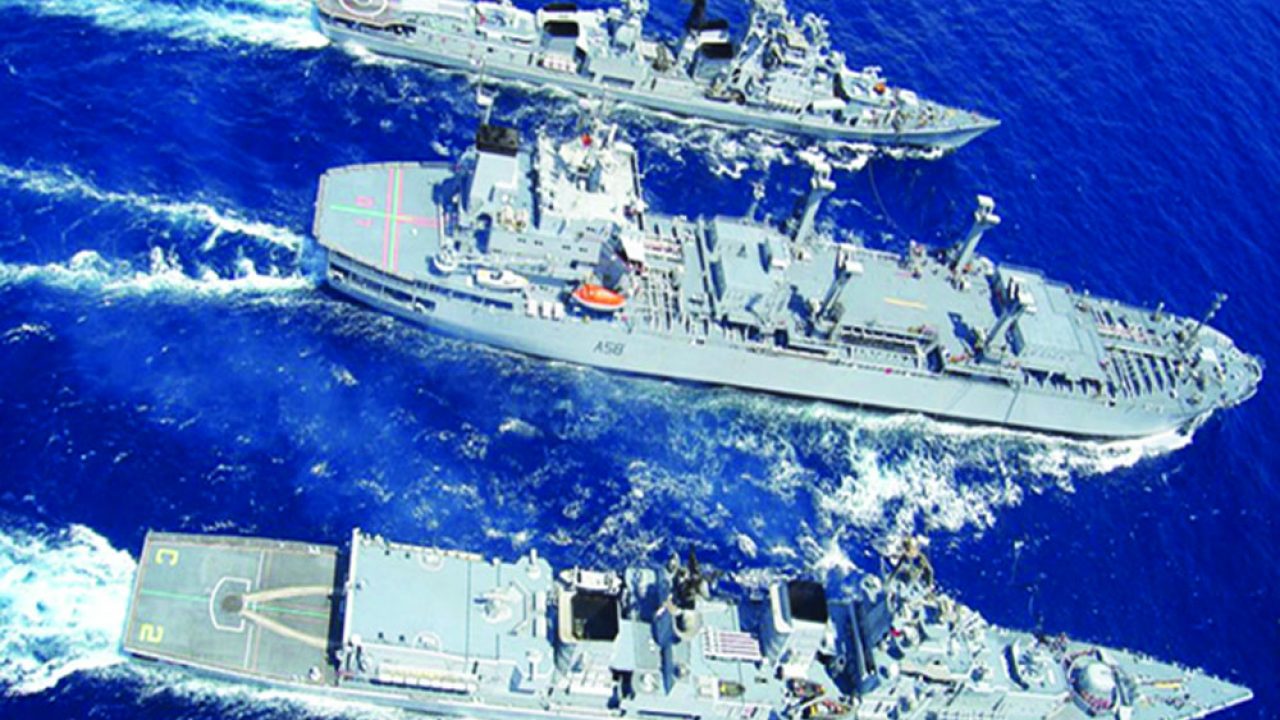 With the fire-spitting dragon becoming aggressive by the day and two-front threat becoming almost a certainty, India needs to shed its historic “continentalist” mind set and transform from a military force to military power. In order to become a recognised military power India apart from strengthening its maritime power has also to develop non-kinetic warfare capabilities in the cyber, space and electronic warfare domains. India has the technology but has so far been keen on using it for civilian use rather than military use. A minor policy change will enable us to develop systems purely for military use. There is an urgent need to develop threat specific responses to ward off threat to our national security from belligerent China and Pakistan.

Our strategy so far relies on the offensive capabilities of the Indian Air Force to counter the threat posed by our adversaries. But China has deployed an array of Surface to Air Missiles (SAMs) in both Xinxiang and Tibet regions and is also providing military assistance including proliferation of banned technology to Pakistan to upgrade its Integrated Air Defence System (IADS). At the same time China and Pakistan have colluded to ensure that we remain fixated towards our land borders and have to spend so heavily to keep them secure that the much wanted expansion of Indian Navy to ward off maritime threat and counter China’s growing interest in the Indian Ocean. Two-front threat is certainly a measure taken by the Chinese to keep India focussed to threat from its land borders and remain distracted from its maritime ambitions which were exhibited in the recently enhanced budget of the Navy and its impressive acquisition list including aircraft carriers, destroyers, frigates, amphibious transport ships, submarines, and surveillance aircraft. “An increasing realization that the destiny of our nation is entwined with our maritime destiny,” as stated by a former Naval Chief.

While China is very sensitive to the vulnerabilities of its Sea Lanes of Communications (SLOCs) which cater for its 80% trade and move of oil and goods from the Middle East to the Chinese ports. To keep the Chinese supply chain going safe SLOCs are very critical. Nevertheless, it is taking steps to mitigate its “Malacca dilemma,” from building up its surface naval forces and undersea fleet, to financing deep-water commercial ports in littoral and island nations, to making diplomatic inroads with key actors across the Indian Ocean basin. As part of its string of pearls policy to encircle India, it is negotiating with India’s neighbours namely Bangladesh, Myanmar and Sri Lanka. In the future, these efforts could give China the ability to sustain forward-deployed forces in greater numbers—and might tilt in its favour the maritime military balance in the region. The development of Gwadar port, the Karakoram Highway and use of Iranian ports after signing the strategic treaty with Iran will to a great extent mitigate the Chinese problems at sea. Yet in quest of becoming a global power PLA Navy (PLAN) will still continue to struggle for dominance of the Indian Ocean and pose a threat to India’s claim of the most powerful resident power in the Indian Ocean.

While Russia was the pioneer of developing the Anti-Access Area Denial (A2/AD) Capability to check the NATO forces and primarily the USA during cold war, China in the modern days has made considerable progress in mastering the technology and development of systems to keep the US Navy away from the South China Sea and the disputed maritime claims of 9-dash line. It did not hesitate to fire its deadly hypersonic “Fleet Killer” missile in the disputed Spratly Islands when the USA was busy conducting the ten-nation RIMPAC naval exercise off the Hawaiian Coast in the Pacific Ocean. Incidentally an Indian Naval ship was also deployed in the South China Sea at that time. The DF 21 Killer Missile has the capability of destroying a moving carrier at sea. With this China displayed its Area Denial capabilities and sent a stern warning to both USA and India.

India also needs to develop A2/AD capabilities to prevent any future build-up of Chinese forces in the Tibet region and neutralise any threat from Pakistan by grounding the Pakistan Airforce before it is able to be airborne as far as our land frontiers are concerned. Along the maritime borders the capability will enable us to prevent access of PLAN and restrict the freedom of movement of Pakistan Navy. Inherent in it would be the development of countermeasures needed to ensure freedom of movement and operation of own air and maritime forces across the land and maritime frontiers.

To develop the A2/AD capability, it is necessary to understand its philosophy.Action intended to slow deployment of friendly forces into a theatre or cause forces to operate from distances farther from the locus of conflict than they would otherwise prefer is called as Anti-Access (A2). It affects movement of adversary forces into a theatre. Action intended to impede friendly operations within areas where it is difficult to prevent access of inimical forces is termed Area Denial (AD). AD affects manoeuvre within a theatre. The two are not mutually exclusive. A2/AD capabilities are overlapping and spread across multi-domains to include both kinetic and non-kinetic systems with the sole purpose of degrading the adversaries’ war-fighting capabilities at land, sea, air, cyber, space and EW. The emerging technologies representing military revolution in technologies like the Artificial Intelligence (AI), Quantum Technology, Swarm Technologyand hypersonic weapons form the backbone of these capabilities. A potent A2/AD capability will pose a serious threat to the ability of both our adversaries to deploy and employ forces across our land and maritime boundaries.

India needs to develop A2/AD capabilities not only as countermeasures to the combined threat posed by both China and Pakistan but also to pose a similar threat to them both at land and sea.

A2/AD capabilities have to be an integration of terrestrial, air and space based sensors which can defeat stealth technology, array of long range deep penetrating cruise, surface to air and air to surface missiles, space weapons, satellites, hypersonic weapons and aerial platforms both manned and unmanned. India is having an arsenal of formidable missile systems and aerial platforms, it has invested in the Russian S-400 Air Defence System, Phalcon AWACS, armed drones and other Air Defence systems but it still needs more to develop a formidable A2/AD capability particularly to dominate the Indian Ocean and keep PLAN at bay. For purposes of command and control the existing Strategic Forces Command should be nominated. India needs to invest more in boosting aero-space capabilities and cyber warfare capabilities. Need for an Aero-Space and a Cyber Command has become more pressing now.

As countermeasures to the adversaries’ A2/AD capability in Tibet region and against our western neighbour We need to invest heavily in development of Stealth, Stand Off precision strike, Manned Unmanned Teaming (MUT), Swarming technologies and development of a robust Command, Control, Communications, Computers, Intelligence, Surveillance and Reconnaissance (C4ISR ) and Electronic Warfare(EW) potential. Meanwhile IAF will have to be boosted with the next generation stand-off strike capability in form of missiles and unmanned platforms.

As far as Indian Ocean is concerned, India will always be constrained by resources to invest heavily in power projection naval platforms. Due to the nature of threat to India’s security, Indian Army and the IAF will remain the main focus centres as far as defence expenditure is concerned. But at the same time in order to score over China, India will need to cash upon the Chinese Malacca Strait Dilemma. The best option for India in such an eventuality is to spend on A2/AD capability rather than investing in maritime power-projecting forces with more concentration on Anti- Access capabilities because India enjoys the advantage of home turf viz a viz PLAN. India’s

For this, India’s island territories namely the Lakshadweep Islands off of its southwest coast and especially the Andaman and Nicobar Islands to the southeast will play a very crucial role. These territories, which overlook critical Indian Ocean sea-lanes, give India a toehold in the Arabian Sea and the Bay of Bengal. India has already taken steps to bolster its military presence on these strategically positioned islands during the ongoing standoff with China. These could be developed as epicentres of our A2/AD capabilities to guard our maritime frontiers.

With the Himalayan defences becoming impregnable, a fool hardy enemy will only attempt a major/decisive battle there. While mind games and provocations will continue along the LAC, decisive blow to the Chinese will be delivered at the sea only. In order to counter China’s growing expansionism and belligerence, India should seriously explore the option of converting the QUAD from a mere security dialogue to a security alliance followed by QUAD +. The combined GDP of QUAD is double that of China thus neutralising the growing economic muscle of the Dragon. Also, the move will benefit India as far as the Aatamnirbhar Bharat Mission is concerned. The availability of high-end technology will become easier giving a boost to the domestic production and also ensure safety of supply chain lines.

(The author is a Jammu based veteran, columnist & strategic analyst)