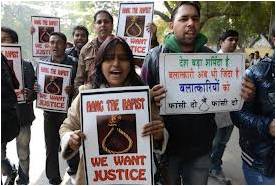 The national expressed a collective horror over the gang rape of young woman in a moving bus in New Delhi on December, 16, 2012. The government was put on the dock and called upon to take corrective action immediately. The government, of course, is quite adept in handling such matters; it knows full well that it has to stand its ground for some time and then such affairs invariably die down. For buying time the government sends its representatives to television channels to talk the audience silly with some gossipy and inane rhetoric; the talk is supplemented by institution of one or a number of committees to look into the subject, apart from buying time these committees also facilitate distribution of largesse to some senior, retired personages looking for work. The reports of the committees are mostly consigned to a dusty grave in the labyrinth of documents in government offices, in case there is a hue and cry they are tabled for the benefit of some more inane discussion. At the end nothing comes out of the entire exercise.

The Delhi rape case has also followed the well set pattern. There was a hue and cry; the government spokespersons went overboard in their breathless explanations on television and the Verma Committee was constituted to give recommendations on the “possible amendments of the criminal law so as to provide for quicker trial and enhanced punishment for criminals accused of committing sexual assault of extreme nature against women”. The accepted recommendations of the committee were structured into an Ordinance on rape laws that was implemented on February, 03, 2013. The case against the offenders is going on in a fast track court. The entire proceedings enacted with

great efficiency by the government with ample support from the media went on for a month and a half, a good enough time to rake in maximum benefit. Now other more scintillating matters like the Agusta Westland chopper deal have taken centre stage.

The problem is that when a particular topic is at its peak the moral brigade throws caution to the winds and starts demanding the moon; the committees constituted by the government, in order to play safe, echo the sentiments of the moral brigade. The end result is that while the actual issue dies down the peripherals created by loose talk become a lasting bone of contention.

In the horrifying incident of the Delhi gang rape case also something like this has happened. The case, by itself, has got involved in a legal tangle that may take years to unfold; the speedy justice that the nation was looking for is not likely to come by, especially now that a fresh debate on death penalty has hit the headlines. Sadly, more serious issues like amendment to security enabling laws like the armed forces special powers act (AFSPA) have surfaced in a manner that may harm the operational ability of the forces in sensitive areas afflicted by internal strife.

Crimes against women by personnel of the armed forces are covered in chapter five of the Verma committee report. Salient recommendations of the committee include bringing armed forces personnel accused of sexual assault under the purview of the criminal law instead of the military law; special commissioners to monitor and initiate redress action in cases of sexual assault by armed forces personnel and addition of a new Section 376 F to the Indian Penal Code (IPC) laying down seven to ten years rigorous imprisonment for ‘breach of command responsibility’ by public servants including those of the armed forces with regard to sexual offences committed by persons under their command.

If this was not enough, the committee has gone ahead to recommend a review of continuance of AFSPA in areas afflicted by internal conflict, something that is completely beyond its mandate. The committee has also recommended amendment of Section 6 of AFSPA to scrap requirement of central government sanction in case of armed forces persons involved in sexual offences covered under specified sections of the IPC.

What the committee has failed to appreciate is that rape is covered as a “civil offence” under Army Act Section 69 and 70. Trial of this offence when committed by a person subject to the Army Act while on active service, whether in areas where AFSPA is in place or any other area under jurisdiction of the military law, can be taken over by the Army from the concerned civil court under the provisions of Army Act Section 125. Therefore, in this case, AFSPA does not give to the services any additional powers not already vested under military law.

The committee’s statement that “impunity for systematic or isolated sexual violation is being legitimised by AFSPA” is arbitrary and baseless when seen against available statistics. Records suggest that in instances of sexual assault by personnel of the armed forces, justice meted out by the Army courts is faster and harsher than civilian courts.

It is, therefore, not without reason that the government did not accept the recommendations of the committee on this subject and the Ordinance does not include any amendments in the AFSPA. Those who wish to counter the absolutely legitimate and correct decision of the government need to get their facts right.

Notwithstanding the legal position, the nation needs to repose enough confidence in its armed forces and rest assured that they will never ever condone a crime as serious as rape committed by their personnel, more so, in areas where the forces have been vested with a sacred responsibility of ensuring safety and security of the people. Instances of rape are rare in the forces but when they do happen harsh and exemplary punishment is meted out in a timely manner. Against this backdrop it does not serve any purpose to play around with internal security and terrorism in an inconsiderate and cavalier manner.