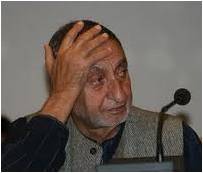 The history of Kashmir has three narratives, the official, the common man version and the secret one known only to players of Kashmir politics. It is the secret narrative which is the most important of the three and which has a profound impact over the happenings of the State. The complexity of the situation in Kashmir is the product of the overlapping narrative of all the significant players and truth is the first victim of this entanglement.

Recently, the prominent Hurriyat leader, Abdul Gani Bhat, stated that separatist leaders including his brother Mohammad Bhat, Mirwaiz Muhammad Farooq and Abdul Gani Lone were shot dead by militants and not by the security forces or some government agencies as has been alleged till now. Despite this being an open secret the significance of the statement lies in its acceptance by a fellow separatist. There are two aspects of the acceptance, why has it been accepted and why it took so many years. Both points deserve separate scrutiny.

Let us first see why he or anybody else in his ilk did not expose the militants at that point in time when the crime was committed or all through the years that have passed by. To bring my point on the table I will give an example from our next door neighbor who also has the distinction of being the alma mater of the Kashmiri separatist movement and of course the rule of the gun which has plagued the region for more than two decades now, the Islamic Republic of Pakistan. Recently, the Governor of Pakistan Punjab, Salman Taseer, was shot dead ostensibly for holding liberal views and specifically for being vocal about his demand for a change in the draconian Blasphemy Law which is becoming a bane for the small segment of minority population left alive in Pakistan. He was murdered in cold blood by a fellow Muslim who was also his body guard and who smilingly surrendered to the Police personnel present in-situ after committing the horrendous act. The silence of the establishment and the public at large suggests that Taseer’s murder has the support of a powerful lobby in Pakistan which in turn implies that the murderer is not alone in this act.

Similarly, the silence of the political lobbies in Kashmir and specifically the separatist leaders at the time when the Hurriyat leaders were murdered by the militants suggests that the acts had the tacit approval of those exercising power in the State. As a corollary, the exposure of this information after a decade can be explained as an off shoot of changes in the power dynamics. The influence of Bhat and other Hurriyat leaders is at an all time low and they are now looking for a way out of the political mess that they have created for themselves. This may also be a move to sideline the rigid postures of leaders like Geelani who are trying to hijack the separatist movement from this group of so called moderates. The Bhat stake in maintaining the status quo is very less and he would certainly like to regain his position through disclosures of this nature that discredit his detractors.

It is well known that anyone who opposes the most powerful faction or the benefactor of a militancy stands the risk of being eliminated. Islamic insurgency and secessionist movement are no exception. Even Bhat has acceded this point by stating, “Wherever we found an intellectual, we ended up killing him. Let us ask ourselves: was Professor Wani a martyr of brilliance or a martyr of rivalry?”, by so saying he has exposed the militant’s fear of intellectual or free minded thought.

We now have a benchmark for analysis provided by the separatists themselves – Anyone who takes an independent stand ignoring the dictates of the Pakistan Inter Services Intelligence (ISI) and Pakistan government/Army will have to pay a price. Such murders will never be condemned by separatists as the sanction comes from the highest point in the hierarchy. It seems that the Hurriyat, which was created by the ISI has been called upon and will continue to be called upon to give its pound of flesh to its mentor as and when the need arises.

At the time when Pakistan was supporting militancy aggressively and the valley was burning anyone who proposed talks with the Indian government was made to keep mum or was eliminated. But during the Musharaf regime Pakistan, for the sake of its own global image, supported talks and the Hurriyat hardliners toed the line with surprising alacrity. Now Bhat has attempted to expose this double standard, he said, “When we entered into talks with New Delhi, we were accused of being Kafir (non-Muslim), and when you (the hardliners) talk you get away scot-free. This dichotomy in Kashmir politics should end.”

There are many dichotomies in Kashmir which should end. This incidence has given an opportunity to all those who have a stake in the welfare of Kashmir to put their act together. The major questions are – how many more such facts and truths are there in the political closet of the separatists in Kashmir. Who call shots and what factors are considered to decide the political postures? Now is the time remove all skeletons from the cupboards and look for a new beginning. For one, the Hurriyat owes an apology to the security forces whom it has been constantly maligned and continues to do so. Further, it has to come out clean about its policy regarding the security of the region considering the fact that the militants are now exposed as opportunistic murderers. It also has to come out clean about its policy with respect to Pakistan and the acts of terrorism that the country is perpetrating in the region. The need of the hour is an honest unraveling of the hidden instruments which guide the politics of Kashmir. Transparency is desired from all the actors.