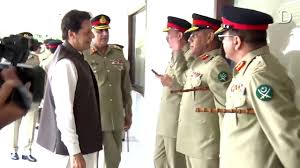 About a week back, Imran Khan visited the Pakistan Army Headquarters at Rawalpindi. He was accorded a ceremonial welcome by the Army Chief, General Qamar Bajwa and briefed on operational matters. He was accompanied by his senior cabinet colleagues, the Ministers of Defence, Foreign Affairs, Finance, Information and Minister of State for Interior.  Khan is said to have assured General Bajwa that his government shall provide all resources required to maintain the capability and capacity of the armed forces, while Bajwa assured Khan that the Army will not interfere in the functioning of his government. The bottom line that the army has set out is very clear, do not mess with us and we will allow you to function!

Pakistan military’s penchant for ruling the country is not a secret. Military regimes, however, have been unable to command respect and recognition by the people and have been forced to usher in civilian governments due to public pressure. Mindful of the dire consequences if it fiddled with democracy and took direct control, the army went in for a tectonic shift in its policy! It started pulling strings from behind the scenes, especially so in the domain of foreign affairs and more so in the policy towards India. Defense budget, naturally, remained a holy cow where no political interference was possible.

Three-time Prime Minister Nawaz Sharif, who enjoyed widespread support among the masses, attempted to establish his authority and has been unceremoniously ousted and jailed. The Pakistani army forced the judiciary to collude with it in first toppling Sharif from power on corruption charges and then sending him to jail. The army was miffed particularly with Sharif’s attempts to improve relations with India. The generals had every reason to feel angry since they looked upon Nawaz Sharif as their protégé. Pakistan Muslim League (PML-N) was the beneficiary in 1990, when the army engineered the defeat of the Pakistan People’s Party (PPP) government.

With both PPP and PML-N out of its favour, the army needed a third political force. Who else could fit the bill other than Imran Khan and his Pakistan Tehreek-e-Insaaf ((PTI) party?  The army’s tilt towards Imran became obvious when it gave tacit support when his party, which, along with the cleric Tahir ul-Qadri took out a march to Islamabad to seize Parliament in 2014 in its bid to oust the Sharif government.  That Imran Khan and the Pakistani army were working in tandem was revealed by none other than the PTI president Javed Hashmi.  At a press conference, Hashmi dropped a bomb by saying that Khan was plotting with the army to oust Sharif government and that some members of the country’s top court were also involved.

The relations between the Army and PML (N) took a turn for worse when Pakistan’s widely read newspaper, Dawn, published a news story in 2016 citing a meeting where in the civilian government told the senior military officials to do more on the fight against armed groups following the mounting international pressure. As expected, all hell broke loose and the military saw a vicious campaign against it by the Sharif government in leaking details of what was supposed to be a confidential meeting.

That proved to be the final straw. With the writing on the wall clear, Sharif started taking on the army more aggressively. His accusation that the army was not only in the know but facilitated the entire operation of a terrorist attack on the Indian city of Mumbai that killed 166 people was a deliberate ploy. Sharif wanted to portray the image of his government as helpless and the military generals as main villains in the country’s inability to fight against the militant groups as demanded by the US and other countries in exchange of financial assistance. While Sharif’s attacks against military generals became shriller, he   committed the gravest mistake of his life by simultaneously opening another front against the judiciary following the Panama paper leaks in which he along with his family and friends were named for their links with offshore companies. As the proverb goes: “The enemy of my enemy is my friend”, the army and the judiciary joined hands to form a formidable alliance against Sharif, and it became clear that Sharif’s days were numbered!

Imran Khan smelled the rat and petitioned the court which ordered the formation of a six-member Joint Investigation Team (JIT), which included four members from Federal Investigation Agency, National Accountability Bureau and Inter-Services Intelligence (ISI). With majority of the members drawn from Pakistani military and intelligence, it was a known outcome. As expected, Sharif was found guilty and disqualified for holding public office.

Unlike previous elections, Pakistani military, this time, decided to prop up a government which lacked mandate and would always be dependent on it for running the affairs of the government and it homed on to PTI as its best bet. As the elections approached, lawmakers of Sharif’s party were coerced into deserting the party with the threat of corruption charges. There were media reports of massive rigging during polls in favour of Imran Khan’s party.

As it turned out, Imran’s PTI emerged as the single largest political party but way short of the numbers to form the government on its own. It took several days before Imran could stitch together a government with support from several political parties most of which were backed by the Army.

With the sword of uncertainty permanently hanging over his head, Imran will not have the gumption to go against the Army, He is also smart enough to learn from the mistakes that Sharif made and is unlikely to repeat the same. This is an ideal situation for the Pakistani army as it can dictate its policies on the incumbent government. The only difference this time is that the army will have complete stranglehold on the government, unlike on earlier occasions when it restricted itself to foreign and defence policy issues. In Imran Khan, the army has found a perfect lame duck prime minister who will provide legitimacy to the military-controlled government.

(Vikas Khanna is a senior Delhi based Journalist)