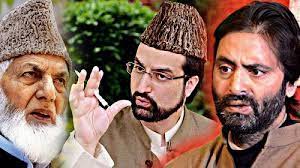 The advent of New Year normally leads to assessments of the year gone by and predictions on what the coming year would bring with it. Such an exercise by the Hurriyat Conference, the separatist conglomerate operating in Kashmir, would build a very dismal and gloomy picture indeed. It is well known that the Hurriyat has been steadily losing its clout and relevance over the last few years, since people have seen through its self serving and disruptive policies. 2018, in particular, has witnessed the stature of the conglomerate hit an all time low with the fortunes of brand Hurriyat witnessing a solid nosedive. The conglomerate is finding it difficult to stay afloat.

The blame for such a situation coming to pass lies squarely upon the senior leadership of the conglomerate that has exhibited an inability to stitch together a worthwhile political initiative.

While there is a lot of talk of the government not coming forward to open dialogue with the “stakeholders” in Kashmir, what is being sidelined is the fact that the Hurriyat, in 2018, has been approached for talks through multiple conduits but has consistently been turning down the proposals.

Shri Dineshwar Sharma, who has been appointed as interlocutor by the NDA government, has made multiple attempts to open talks with the Hurriyat which have been rejected arbitrarily. In June 2018, Hurriyat leader Syed Geelani ruled out a meeting with Sharma and thus closed the chapter altogether. In November 2018, Home Minister Rajnath Singh reiterated the centre’s offer for talks! He, in fact, expanded the scope by expressing readiness to talk to those who may not be necessarily be “like minded.” Unfortunately, there were no takers among the Hurriyat to his offer.

The actual reason behind this reluctance to get to the negotiating table is the investigations into the illicit and criminal funding of terror and disruptive activity in the Kashmir Valley that have been going on since late 2017.  The Hurriyat leadership is in the centre of this investigation; its financial conduits are also choked by it thus adding to its woes.  When asked about the Hurriyat’s concerns over the NIA’s multiple investigations, Mirwaiz Umar Farooq said: “The government should decide whether they want to arrest us or talk to us.’’ Hurriyat is, evidently, looking to leverage talks as a method the escape the heat of the investigations.

With no talks in the horizon the Hurriyat has very little to offer to the common man in Kashmir who is looking for peace and stability. It has, instead, attempted to cause disruption and divisiveness to which end it sent out a strong appeal for boycott of the Urban Local Bodies and the Panchayat elections. The appeal was given in August, 2018, by Syed Geelani, much before the elections were even announced. “Participation in the elections is tantamount to treason,” he said rather grandly. To the eternal embarrassment of the party the elections were successfully conducted by December end with no incident of violence reported. The people, candidates and voters alike, simply disregarded the boycott call given by the Hurriyat. Even threats by the Hizbul Mujahedeen (HM) that came in tandem with the boycott call were treated with disdain. It is notable here that the HM is a terror organisation aligned with the Hurriyat. Pulwama, considered to be the hotbed of terrorist activity, witnessed as many as 151 candidates in the fray for the Panchayat elections.

The Hurriyat is now trying desperately to save face by saying that the boycott call was a success. The reality on ground is entirely different. Voting percentage stands at 33 percent and the elected representatives have already taken over their responsibilities. In the near future this strong willed initiative by the government is expected to be a game-changer in Kashmir.

Hurriyat’s favourite tools of Bandh (lockout) and Hartal (strike) also witnessed a drastic set back in 2018. People refused to get roped into this disruptive activity and spoke openly against it. The situation is being read as a clear indication of the rejection of Hurriyat brand of politics by the people who have rooted for a more stable and peaceful life. Such is the situation that in, November 2018, the Hurriyat has publicly admitted to the need to look for alternatives to ‘Hartal politics.’

An incident of mob violence at Pulwama in December, 2018, that led the death of a few civilians due to firing in self defence by security forces was exactly what the Hurriyat was looking for to resurrect its dwindling fortunes. It called for the statutory Bandh and a march to the Badami Bagh cantonment in Srinagar but the initiative failed to take off. The year, thus, ended rather tamely for the Hurriyat.

The Hurriyat has failed in its objectives and for this it has its own duplicity and anti-national brand of politics to blame.  The contradictory behaviour of its leaders is there for all to see. They neither wish to talk nor do they wish to participate in the democratic process! This makes them out ad out anarchists who have absolutely nothing to give to their people.

When it suits them, the leaders garner favour from the central as well as state government for their family members and also extended alliances. But for the common man the only recipe they have is disruption, distortion and divisiveness. They have created road blocks for all attempts to free the troubled region from the shadow of the gun and usher peace, prosperity and development which the people yearn for. They have set up a trail of allegations against both the government and the security forces through a well orchestrated propaganda campaign.

The people are quite fed up by the obscurantist political line followed by the Hurriyat which lead to great economic and human loss. They have, by now, seen through the corrupt, self serving and warped practices of the organisation. It would not be an exaggeration to say that the conglomerate stands totally exposed and irrelevant. It best recourse for 2019 would be to learn from the mistakes committed in 2018 and before that, restructure its policies and align them with the actual aspirations of the people.

(Dr. Simrit Kahlon is an academician and Geo-strategic analyst)