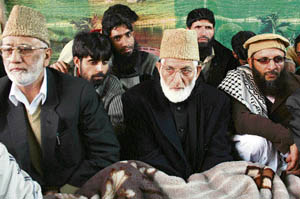 The Interlocutors appointed by the government of India for Kashmir will soon be submitting their interim report, after discussion with the different stake holders of Kashmir. The only group which the interlocutor could not engage in a dialogue is the Hurriyat Conference. Repeated attempt by the three member team did not bear fruit as the separatists simply refused to change their stand. This posture is quite surprising since this vocal and passionate political group was expected to grab the opportunity to put across its views.

It is worth analysing the reasons for their current posture. We must remember that with respect to the Kashmir problem the Hurriyat conference is seen to be a game spoiler. Every time the possibility of peace dawns upon the valley, Hurriyat, on one pretext or the other creates road blocks and exploits the emotions of the common Kashmiri. Their double standard, though very well known, is successful because they have a dedicated cadre of supporters, well paid with foreign funds, well organised and motivated to create trouble whenever instructed to do so.

It seems that the Hurriyat’s decision of not meeting the interlocutors is based on some political realities. Hurriyat is a Pakistani stooge and it makes every move after due orders from across the border. The Pakistan’s army is in wait and watch mode and is not ready to make any move at present. It realises that the environment in the valley, at present, is not conducive to any protest. The season of protest is summer, which is still a few months away, till then both the master and the servant are waiting for new developments that may help them up the ante. Also, by that time the interim report of the interlocutors would be out, the stand of all the major and minor groups will be available and the government’s action on the interim report will also be public. This will help Pakistan in formulating the next move.

The current situation in Pakistan is also not very conducive to any grand posturing or strategy change. Presently Pakistan is not very happy over the cold reaction of the international community to the Kashmir unrest. The changed perception of the international community towards India has also made the Pakistani establishment sit up, take stock of the situation and reassess its options. However, the point to note is that Pakistan’s strategy, especially in relation to Kashmir, does not change with changes in the country’s domestic political situation. The Kashmir policy of Pakistan is formulated by the Army and it is not intrinsically related with the current political chaos in the country. The Army is closely watching the situation on both sides and not opening its cards. As if on cue, the separatists in valley are also holding their cards very close to their chest and waiting for the outcome of the report and more importantly the diktat from across the border.

Presently, there is no clear message from Pakistan and this is the reason the Hurriyat is questioning the credibility of the interlocutors by suggesting that this is not a decision making body. They are taking recourse to such subjective and misleading statements because they are very well aware that if they say anything concrete at this point of time it will form a noose around their neck in the future. It will be very difficult to change the said stance without getting mud on the face. They surely want to save themselves of this embarrassment.

Another reason for the hesitation in talking with the interlocutors is that the separatists do not have anything new to offer. In fact, their political stand has got diluted since the protests orchestrated by them during last summer since main stream parties have high jacked the movement by not relenting from their righteous and justified stand. At this stage the call for freedom from India has no takers even in the Kashmir valley not to speak of the entire State of Jammu and Kashmir

A point of worry is the demand of the Hurriyat to move paramilitary and Army from the valley which is finding an echo in the mainstream leadership also. It seems that due to wrongly perceived political considerations the main stream parties have fallen into a trap laid by the Hurriyat. To blame the security forces for the problems in Kashmir is just a charade whose underlying motive is to create an environment for the resurrection of local armed insurgency as infiltration has become very difficult.

We need to be absolutely clear that the solution of Kashmir has to be worked out internally and allowing Pakistan to be a party in the internal political problem is a blunder for which the Kashmiri’s will pay a far greater price than the rest of the country. The presence of the security forces, especially the Army, in Kashmir has ensured that the status quo is maintained which has, in turn, paved the way for the solution to emerge from political goodwill and groundwork. This is the essence behind the appointment of the interlocutors and it is for this reason that the Hurriyat is wary of the panel and is refusing to engage with them.

Nevertheless, the policy followed by the interlocutors that every community and shade of opinion whether they are vocal or not must be approached, listened to and given due cognisance is bound to pay good dividends. Now we will have a clear picture as to who stands where and most probably the separatists will emerge as a small minority. In case this happens then the Indian leadership should bear in mind that great problems are solved by great effort and hard decisions, will we generate the guts is a million dollar question.