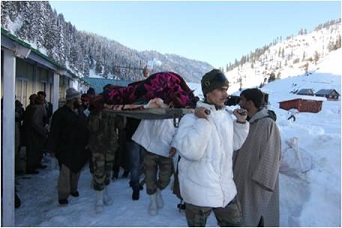 Winter is a testing time in the remote mountainous regions of Jammu and Kashmir, especially the Kashmir valley. Extreme cold and snow bound conditions severely restrict routine activity; roads get blocked due to snowfall and landslides which, in turn, causes disruption in supplies. The remote regions are the worst affected, with tenuous communication links in the best of times, they get completely cut-off during the winters.

One would expect the government of the day to take all possible measures to ensure that no part under its watch, however remote, is left unattended. There are, however, geographic and development constraints that inhibit the capacity of the government in the discharge of this all important responsibility. In Jammu and Kashmir particularly, set back in development for many decades due to the advent of terrorism has created massive problems. Now that peace is a reality and the civilian government is functional, such administrative aspects will undoubtedly improve but it will take some time.

Under these challenging circumstances it is the Indian Army deployed in the remote areas of the state that comes across as a saviour angel during times of winter distress, especially so, in the valley of Kashmir. In view of its operational deployment in all remote areas of the state it has created a self sustaining administrative infrastructure of its own. It is the proximity of Indian army posts to villages in the remote cut off areas that comes in handy in looking after the emergency needs of the people.

Let us take the example of the Machhal bowl in the Kashmir valley. This region constitutes the remotest border villages in North Kupwara. It is here that the army made some sterling contribution in evacuation of sick persons and saving of precious lives during this winter. Complications during pregnancy are the most difficult to handle in adverse weather conditions. The army is very sensitive to this challenge and every year it makes special effort to ensure that maximum cases of complicated pregnancy are attended to. This year was no different. Three pregnant ladies and their newly born babies were saved on January, 5, 20 and 28 in the Machhal bowl.

The first patient, Zarifa, was evacuated to Primary Health Centre Kalaroos in an Army ambulance accompanied by an army nursing assistant. The lady delivered a healthy male baby who was named “Jaanbaz” by his parents to respect the efforts of the Army. In the second instance, an army nursing assistant walked 5-6 hours in heavy snow bound conditions to village Ringbola to give medical aid to a pregnant lady who underwent a normal delivery due to the resuscitation aid made available by the army person. Village Ringbola faced yet another emergency on January, 28, when Atika Begum developed complications in her seventh month of pregnancy. The nursing assistant who had earlier assisted in the childbirth on January, 20 in the same village once again rushed to the village. The patient was given immediate medical aid and then carried by army personnel on a stretcher to a place where an army doctor was available. The doctor administered life saving support and then took the patient in an army ambulance to a primary health centre; both the mother and child are safe now.

Emergencies other than pregnancies also receive spontaneous and active attention of the army. On February, 09, an Indian army post in the Machhal bowl received a desperate call from a village called Pushwari that a girl, Mumtaz Banu, aged 15 years was complaining of severe abdominal pain with vomiting. The village was about 2-3 hours walk from the army camp and the route was covered with unbeaten 7-8 feet of snow; yet, a team with a nursing assistant reached the village and evacuated the patient after administering emergency medical aid. An army doctor supervised the treatment before air evacuation of the patient to Srinagar where she reached safely and is recovering.

Lack of medical facilities is another problem that the poor people residing in remote areas have to contend with. There are many who are born with some medical impairment that can be corrected but live with it through their lives because proper medical facility is not available to them. Kunjus Dolma, a 20 yrs old girl of the Darchik village, in Kargil district of Ladakh suffered from a major misalignment of eyes, since birth. This handicap lowered the self confidence of the girl and affected her studies among other social problems. The army intervened with necessary permission to get her treated at Pune, Maharashtra. The girl today has a hundred percent parallel vision.

The means that the army has at its disposal in remote areas have been created to assist the force in discharge of its national security duties That the force utilises the capacity for the sake of nurturing humanity is indeed appreciable. It would be very easy for the army to adopt a cynical, bureaucratic approach and say that operational responsibility leaves no time to do a job that is the responsibility of the government. It, however, appreciates that the government functions with its own set of constraints and limitations and thus it moves forward to render all assistance in humanitarian causes. It performs a moral and a national duty by walking the extra step without looking for any benefits. It has the means where others are not available and it does not hesitate to spontaneously putting them to good use.

The idea is for human beings to rise to help each other in challenging circumstances. By optimally utilising its capacity and capability in remote regions the army is setting a great example of social responsibility. If each Indian national follows this dictum, the task of the government will become that much easier, resulting in manifold increase in efficiency. Even self serving political leaders would be left with no option but to follow the example set by others.