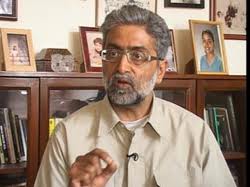 Gautam Navlakha is said to be a journalist and a human rights activist. He was in the news recently due to his detention in Srinagar under Section 144 of the criminal procedure code (CrPC) on the grounds that his presence would disturb the peace in the region. Gautam Navlakha is the convener of some fringe establishment called the “International Tribunal on Human Rights and Justice in J&K” and is said to be an active campaigner against state repression in the Valley. With such illustrious credentials one would gain an impression that he is well loved by the common man more so by the people of Kashmir. A look in Facebook would present a different picture. A Facebook post “Gautam Navlakha is mentally sick…get well soon,.” presents a veritable hate mail library against him written mostly by Kashmiri Pundits. Two posts being given as examples run as follows “Why do we let such psychopathic trecherous manipulative seditious dangerous pseudo moralist pigs thrive in the country???!!!! He is a maniac and needs to be treated like a rabid dog….just like Arundhati Roy, Teesta Setalvad and scores of other jerks!!.” The second post is equally interesting, “All i can say is you are Mentally Sick… Where were you when there were Human Rights Violations against KP’s………Are you getting paid by Pakistan?”

Around the same time, Arundhati Roy, yet another human rights activist in the same ilk as Navlakha, whose heart also bleeds profusely for a small segment of the Kashmiri society, released her fourth collection of essays “Broken Republic” on Friday, May, 28 at the India Habitat Centre. Her reference to Jammu and Kashmir in her address was met by extensive sloganeering from the audience with allegations of insulting her country by airing such views. Some pamphlets were also thrown at her and before the matter could progress to the hurling of shoes, the ever vigilant Delhi Police managed to control the irate crowd.

Human rights are freedoms established by custom or international agreement that impose standards of conduct on all nations. A human rights activist is someone who works towards ensuring that these rights are not impinged upon and that people are treated fairly. This is, by all means, a very noble task and it should win for the person great name and approval from civil society. It is therefore quite astounding that people like Gautam Navlakha and Arundhati Roy should be so hated that slippers are hurled upon them, sloganeering is resorted to when they speak and hate mail is generated against them on the Internet. If only government agencies were targeting them one would say that their righteous stand, principled opinions and positions are being suppressed. Unfortunately, it is the common man who is voracious in his hatred for them. They have the capacity to agitate, to the brink of uncivilized behavior, people who hold no grudge against them and who do not even know them personally. Obviously, there is something wrong, some hidden agenda in the brand of human rights activism that they purport which causes such emotional upheaval amongst common people. A common perception is that they use the platform of human rights for motivated propaganda in favour of their sponsors. In other words it is not ideology that is being articulated by them, it is out and out business.

A crackdown by the government as has been done with Navlakha in Kashmir or a forum like a book launch/seminar as in the case of Arundhati’s recently organised function creates for such people an opportunity to gain the kind of media spotlight that they thrive on, which allows them to give some controversial bytes. The content is mostly low on facts/logic and high on rhetoric designed explicitly to ignite passions amongst the vulnerable sections of society. Take for example Navlakha’s reaction to his detention, he immediately presented himself to the media and said that the Indian government and the occupation authorities in the territory were extremely jittery about what turn events would take in Kashmir and that barring his entry into Kashmir indicated that the valley had been placed out of bounds for human rights groups. “The Indian government and the authorities are suffocating the people of Kashmir and their leaders,” he pontificated. This was his moment under the sun, this was the opportunity that he was looking for to establish his relevance in the eyes of his sponsors and he made the most of it. What he said was not based on any empirical evidence, why should the government be jittery and pray who are the occupation authorities? Does he mean to say that the Army of his country is a occupational force? Secondly, who is he to speak for the people of Kashmir, a son of the soil, an elected representative, someone whom Kashmiri’s have invited to lobby for them – who is he to adjudicate for them so eloquently?

When the intent of an individual is not above board there is no reason for the State to uphold his/her fundamental rights and the government would be absolutely within its right to take appropriate action to nullify such motivated intent. Chief Minister Omar Abdullah is well aware that a single spark can ignite a fire in the Valley and upset its fragile peace. By taking precautionary measures he is performing his duty in the most apt manner and he cannot be faulted for the same. In fact, he should be given due approbation for standing up to such virulent propaganda and exposing it for what it is.

Freedom does not give any person the right to indulge in anti-national activity. This is more relevant in Kashmir where the country is fighting against well entrenched inimical interests. The government should not fight shy of taking stringent action against any activity that goes against the national cause.