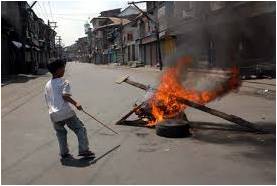 As the Kashmir valley braces itself for the much awaited tourist season and a steady flow of tourists has taken off, the business community, right from the biggest trader to the smallest daily wager has a single worry to contend with – will the separatists disrupt this period of prime economic activity with their famous Hartal and Bandh calendars? The underlying reason for the worry is the creation of a new Frankenstein monster, the Muthida Majlis Mushawarat (MMM) by the separatist camp. This is a sort of joint advisory council of the otherwise fractured conglomerate designed to coordinate social disruption to press home a demand of getting back the body of Afzal Guru. The MMM had issued a series of calendars of agitations right up to end March, 2013, whose implementation caused a loss estimated to be to the tune of Rs 2000-4500 crore. It has been dormant of late but it’s possible resurrection is causing nightmares to the common man in the Kashmir valley. The worry now is that the process may be reignited at a time when it would totally disrupt the tourist season and cause untold damage. The people of the valley are despondent at the prospect of a disturbed tourist season that will bring in its wake untold misery.

The anxiousness of the common man has been gauged by the media and a number of eminent writers from the valley have written against following this line of political activity. In a sensitive article, “Hartals and the daily wager,” Nilofer Qureshi has lucidly explained the difficulties that the lower sections, “the daily wager”, face due to the games that the rich and the powerful play. There are many more writings displaying a similar sentiment.

When translated into English a Hartal means a strike and a Bandh means a lock out. Strikes and lock outs are an off shoot of the industrial revolution where they were used by the workers to leverage their demands by cessation of work. These essentially denote a faceoff between the owners and the workers – two different classes of people. The principle of striking work was put to good political use by Mahatma Gandhi during the freedom struggle. The Hartals and Bandhs of those times were a struggle between two different classes of people, the rulers (British) and the ruled (Indians). The agitations were voluntary and non-violent. Businessmen were not intimidated into closing their shops; they did so because they identified with the cause. Then there was no stone pelting, burning of government property etc, instead, prayers and fasting was resorted to. What is happening in Kashmir today is a complete opposite of the original concept. Over here there is no struggle between the ruler and the ruled, the agitation is against the very government that the people have elected and put in place in the first case. Further, the agitations are being forced upon the people, against their will, by the use of political muscle. People close shops, not because they wish to, but because they are afraid of being harmed physically and materially by the goons of the party that has called for the shutdown. The disruption, therefore, can be said to be against the very freedom that it portends to be fighting for.

What is has been achieved by the separatists by following this line of political activity is something that calls for introspect. “Azadi’, said to be the fundamental objective of the entire game plan does not seem to be anywhere in the horizon. In fact, it is quite unclear as to who is looking for Azadi from whom and for what purpose!! Yet the system goes on year after year.

The family of Afsal Guru had many democratic means to address its grievances against the state. Petitioning the government, going to court and raising public awareness through the media are some of the options that were available to the family members to get their message across. In fact, by resorting to democratic means they would have automatically put the matter in the public domain. Had they convinced the people about the justification of their cause the government would have been compelled to act. If the family had followed the democratic path, chances of attaining what it wanted would have increased. Instead, its cause has been hijacked by some self serving people who wish to pass of as leaders of society but do not see beyond their parochial interests.

The world today looks upon such social disruptions as extreme and anarchic forms of expression totally unsuited in enlightened democratic dispensations. The relevance of this form of protest is negated by the democratic rights that allow the common man to choose his own leadership. Nobody is stopping the Hurriyat from contesting elections and having their say within the framework of the constitution of the country. Why then are they not exercising this right that the nation has bestowed upon them? Constitutional authority will automatically give to then the means to look for solutions.

There is no person in Kashmir who does not feel terrorised by unsettling activity that impinges upon his growth and prosperity. The silver lining is that many in Kashmir have realised that something needs to be done to remove the culture of hate and destruction. The recent calls for Bandhs and Hartals have witnessed a lukewarm response. One can only hope that the segment of political leadership that looks at disorder as a source of survival will realise that such methods no longer serve any purpose and that the time to move on to a better political strategy has arrived. By causing pain they are only alienating the masses whose patience is already at its end.