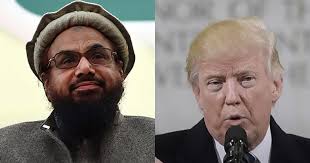 That Pakistan is a reluctant player in the global war against terror is well known to the world. The frequent flip-flops by world powers have only emboldened the country to carry out its state policy of sponsoring terrorism with impunity. Due to the unflinching support from its all-weather ally China, which has often misused its position of veto power at the Security Council, Pakistan does not care two hoots about threats and warning given to it by other global powers, even the US.

Now, Pakistan has once again thumbed its nose at India and the United States by releasing terror mastermind Hafiz Saeed from house arrest.

The country has been quick to fend off criticism by saying that it is the court which has decided to free him and not the government. But it surely cannot escape blame for not presenting its case properly in the court and thus facilitating Saeed’s release.  In fact, India has presented voluminous evidences to Pakistan for his role in the deadly 2008 Mumbai attacks, which have not been effectively utilised to nail the criminal.

Hafiz Saeed’s release is undoubtedly a setback for India, but it also sets Pakistan on a collision course with the United States which has announced a $10 million bounty on his head over the 2008 Mumbai attack that killed 166 people, including six Americans.

It should be recalled that the United States Department of the Treasury had declared Saeed a Specially Designated Global Terrorist under its executive order 13224 in May 2008 before the Mumbai attacks happened. A month later, post the November 26, 2008, Mumbai attacks, Saeed was also designated a global terrorist by the United Nations under UNSCR 1267.

Ironically, Saeed had been moving freely in Pakistan and ranting against India and the US for more than eight years before his so-called house arrest in January this year. That Pakistan allowed him to carry on with his anti-Kashmir and anti-India agenda speaks volumes about its so-called seriousness as far as the war against terrorism is concerned.

Had the US been really serious about Saeed, it could have easily put pressure on Pakistan to act. But Saeed is a lesser threat to the US in comparison to India. That explains the reason why the US is not matching its words with action. Saeed has presented himself before the media and the people of Pakistan several times. If the US could smoke out Osama bin Laden from his safe compound in Abbotabad, what is stopping it from doing something similar with Hafiz Saeed who is out in the open?

Even the bounty that the US declared on his head came in 2012, four years after he was designated as a global terrorist. So, who is playing games so far as Saeed is concerned- Pakistan or the US or both?

The US reacted to Saeed’s release by making a supine statement. “The Pakistani government should make sure that he is arrested and charged for his crimes,” U.S. State Department spokeswoman Heather Nauert said.  It was only after India launched a major diplomatic drive against Pakistan for allowing the release of Saeed that the US spoke in a more aggressive tone the next day, when a White House statement warned of repercussions for US-Pakistan relations and for Pakistan’s global reputation unless it took action to detain and charge Saeed.

Unlike the US State Department, the White House statement was very critical of Pakistan and warned that the relations between the two countries depended largely on the latter’s conduct. The White House said Pakistan’s failure to charge Saeed sent “a deeply troubling message about Pakistan’s commitment to (combating) international terrorism,” adding that it also was counter to Pakistan’s claim that it did not provide sanctuary to militants.

In contrast to his predecessor Barack Obama, President Donald Trump has been vociferous in his criticism against Pakistan for its failure to take action against militants engineering attacks on Afghanistan and India from safe sanctuaries in the country. “We can no longer be silent about Pakistan’s safe havens for terrorist organisations,” Trump said while unveiling his administration’s policy for South Asia, adding that Pakistan would have “much to lose” if it did not comply. But such warnings have had little effect on Pakistan.

There is no doubt that Pakistan has, of late, fallen out of favour of the US which accuses it of pocketing billions of dollars meant for anti-militant operations against Afghanistan. The US is fighting a war in Afghanistan against the very militants who have been trained and financed by Pakistan, and who continue to find safe sanctuary in Pakistan after carrying out attacks in Afghanistan.  The ties between the US and Pakistan have worsened further after the later moved closer to China in the last few years.

If President Trump really wants to live up to his image and his words, then he should decide once and for all whether to continue maintaining ties with a country which has been playing a double game as far as the war against terrorism is concerned or to amend his administration’s decades-long carrot and stick approach.

In case Trump gravitates to the latter option then, to begin with, he can revoke Pakistan’s non-NATO ally status. Non-NATO ally status is conferred on countries which have a strategic working relationship with US forces but are not members of the North Atlantic Treaty Organisation. Though symbolic, it will deal a big reputational blow to Pakistan.

The George Bush administration had designated the non-NATO ally status to Pakistan in 2004 for helping the US in its fight against al Qaeda and Taliban militants in Afghanistan. If Pakistan is still unmoved by this action, then President Trump would be well advised to take a final call based on the famous phrase used by George Bush after the 9/11 attacks, “Every nation, in every region, now has a decision to make. Either you are with us, or you are with the terrorists.”

(Vikas Khanna is a reputed, Delhi based Journalist and commentator)