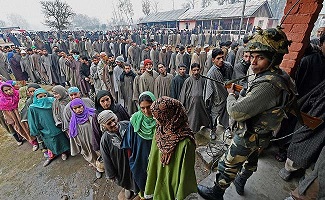 The state of Jammu and Kashmir is standing on the cross roads yet again! Terrorist violence, that had witnessed a down turn is, once again, on the upswing. During this winter, security forces have eliminated more than twenty terrorists within one month.

Inimical forces from across the border are not ready to relent from their devious agenda of keeping the pot boiling in the state; however, their inability to achieve any success in a major portion of the state has compelled them to concentrate only in the Kashmir Valley where, unfortunately, they continue to enjoy some local support.

Those in Kashmir who assist the foreign forces are facing a crisis of credibility; they are fighting a do or die battle. If they are unable to meet the demands of their foreign masters they run the risk of losing their relevance and with it their political standing and livelihood.  They, therefore, are leaving no stone unturned in maintaining the threshold of terrorism at the minimum required level so that the system does not collapse.

The continued success of counter-terrorist operations throughout the winter is also taking a big toll on the morale of the terrorist cadre.

The silver lining is that the terrorists are not succeeding in changing the narrative. In fact, they are being killed selectively and consistently. The success, however, is not coming without great sacrifice in terms of loss of the precious life of brave soldiers and innocent civilians. Efforts of the Indian Army to reduce collateral damage and civilian casualties are leading to a greater number of casualties of soldiers of the nation.

The perception battle also needs to be looked at closely. The timing of the spike in violence needs to be correlated with the crucial period in the month of February when separatist forces attempt to garner maximum support from the Kashmir Solidarity Day on February, 05 followed by the death anniversaries of Maqbool Bhat and Afzal Guru on February, 09 and February, 11 respectively.

The foreign masters of separatist and divisive forces in Kashmir are not ready to settle for the traditional lock out in the Kashmir Valley; they were looking for a much larger impact.

It is possible that the incident at the Jawaharlal Nehru University (JNU) in New Delhi was planned in Kashmir. The manner in which the crowd suddenly appeared, raised slogans, caused disruption and disappeared as fast as it came, leaving the students to face the music is a tried and tested modus operandi of the separatists. The tone and tenor of the slogans raised is also similar to the one used frequently in the Kashmir Valley.

The terrorist attack at Pampore, Kashmir, in the third week of February, points towards a brilliant terror and perception management plan.

Propaganda was generated by leaking information that the terrorists allowed safe exit to civilians in the Entrepreneurship Development Institute (EDI) building where they were holed up for their last fight. “Our fight is with the army,” they are quoted to have said rather grandly.

Along with this, a crowd was collected on the other side of the river to shout anti-army and anti-India slogans. In Kashmir such sloganeering is done by a few paid stooges, the remainder people are all spectators, the effect however, is very strong!

With infiltration from across the line of control (LOC) down to a trickle the only viable option left for the terror mongers is to go for local recruitment of youth to the path of terrorism. To the misfortune of many Kashmiri families, there are some boys who, because of misplaced idealism and the exuberance of youth, get carried away by hostile propaganda and take to the gun without giving a thought to the consequences.

The nation continues to face a strong political, military and information challenge in Kashmir. There is a need to revisit and reframe policy to meet the same

Installation of a democratic government in Jammu and Kashmir is the first necessary step towards meeting the challenge. The Peoples Democratic Party president, Mehbooba Mufti, should realise that with each passing day her credibility is falling and she needs to take a decision either way – form a government or pave the way for re-elections.

It is to the credit of the security forces in Jammu and Kashmir, led by the Indian Army, that attempts by disruptive forces to exploit the fragile political situation have not borne fruit. Security forces are not ready to give an inch to the terrorists.

However, the nation cannot sit back and allow its brave soldiers to be killed by evil, unholy terrorists at such a regular frequency.  Let us acknowledge that the wreath laying ceremonies or visuals of the cremation of heroes does not leave back a sense of pride. Such casualties are a sign of national meekness not courage. The soldiers are doing their duty towards the nation but is the nation doing its duty towards the soldiers?

A dynamic programme to counter the recruitment drive of terrorist organisations has to be put in place. The evil agenda has to be exposed by a well conceived information campaign in the lines of counter-propaganda. The drug menace has to be dealt with on a war footing since drugs are the main reason for the recruitment of youth in the terrorist fold. Most importantly, gainful employment has to be generated for the youth so that their mind is not diverted towards negative thoughts and pursuits.

It cannot be denied that the situation in Jammu and Kashmir is taking a turn for the better. However, the time to sit back and enjoy the laurels has definitely not arrived.  It would be advisable to chart out a vibrant, forceful and comprehensive policy for the state based on a lucid and honest understanding of the situation. One wrong step and we will be back to the black periods of the decades gone by.

(Dr. Simrit Kahlon is an academic and a columnist)