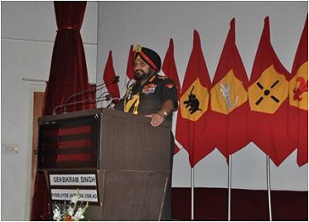 The Chief of the Army Staff, General Bikram Singh, chaired the proceedings of the fifth Biennial Mechanised Forces Conference at the Armoured Corps Centre and School, Ahmadnagar, on February, 26, 2013. From his mechanised forces the army chief demanded effective training and adherence to traditional norms of trust, discipline, human resource development, morale etc.

Even as the top brass of the army was holding this very important meeting, some very worrying inputs were being received from the armoured regiments. It seems that the annual field fire, which is the most important training activity of an armoured regiment, is being carried out with less than 20% of the ammunition required for the purpose. Such is the shortage of ammunition in the country that an armoured regiment is now expected to go through this most important training activity with about 200 rounds of practice ammunition when its minimum requirement is about 1000 rounds. This drastically reduced scale of ammunition means that the 45 main gunners and another 45 second leg gunners of the regiment would get only two rounds per head per year to hone their battle skills. The malaise is not limited to the armoured corps only; it extends to all arms of all three services in the nation, the army, the air force and the navy

In the melee to earn political brownie points, the leadership of the country is discussing cases of corruption in defence procurement with contemptuous vigour. Sadly, no thought is being given to the larger issue of defence preparedness of the country. The defence minister, AK Antony, very proudly speaks of the six international defence firms that his ministry has blacklisted in the last few years. It seems that his ministry has perfected the art of punishing foreigners, brokers, middlemen and service personnel for its own weaknesses and ignoble practices. Anybody and everybody has been put on the dock except for the bureaucrats of the ministry and their political masters. This looks to be too much of a coincidence. The Union finance minister has now declared that the requirements of defence modernisation cannot be met due to a sluggish economy and that the defence budget will be cut by about Rupees 10,000 crore; would somebody please explain to him that the enemy does not discuss economics when he attacks a country. In any case the cut does not matter because his colleague in the ministry of defence will ensure that what is available is also not utilised.

There is a solid disquiet being expressed openly by defence experts and analysts about the appalling state of defence preparedness in the country. Even serving chiefs have been speaking on the issue quite openly. It is rather frightening to see that the political class is simply not responding to the warnings and that the collective wisdom of experts in the field is cutting no ice with them. There is a common belief doing the rounds that by the time the defence minister gets done with maintaining his so called clean image, international defence concerns will be fed up to the extent of refusing to do business with India.

One can understand the guilt that the service chiefs would be feeling when they take the podium to address their troops and seek from them a solemn promise to give their all for the cause of the country. They know full well that they are not in a position to deliver their part of the deal. As the nation went to war in Kargil the then army chief, General Malik, had ominously declared, “we will fight with what we have”, not much seems to have changed or is likely to change in the near future. The bottom line is that no amount of talk of discipline, dedication and hard work can help the rank and file of the army maintain its cutting edge if the means to do so are not made available. For the present military leadership there is not much option left but to be honest and tell their soldiers that their country has forsaken than but they should not forsake the country.