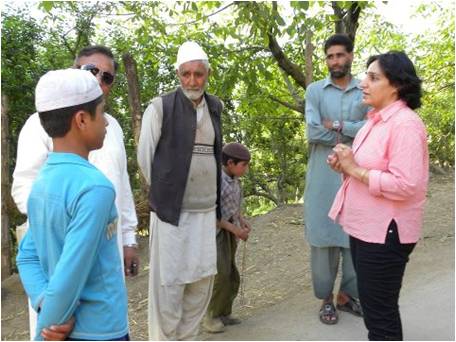 I was headed towards the valley after almost three decades for purely sentimental reasons I chose to travel by road. The little I saw of Jammu city conformed to the image I had of it in my mind. Once a laid back quasi cantonment, its landscape dotted with temples, it was now criss-crossed with flyovers under one of which I alighted from my bus to get into a cab for my onward journey. Eagerly, I looked forward to the changes that the rest of the state had undergone. Of course, the mind was somewhat tutored and conditioned by widely circulated media reports about guns and atrocities galore.

I was more or less resigned to moving into a high security zone. I expected a lot of army personnel dominating the landscape, a whole lot of bunkers, a high visibility of weapons and a relatively subdued populace reeling under the stress of surviving in a terror prone environment. I was pleasantly surprised to see, instead of the army, a continuous stream of civilian vehicles on the highway a large number of which were bearing registration plates of other states of the country. The last time that I had travelled on this road, there had been hardly a private vehicle to be seen. Of course the ownership of personal vehicles was not high in those days and most people travelled by public transport. Even so, the fact that the state and particularly the valley is once again a chosen destination for domestic tourists was extremely heartening. I realised I would not be alone in the valley.

The roads, however, were in a poor condition, especially so, if compared to the those in other hill states like Himachal Pradesh which appeared on the tourism map much after Jammu and Kashmir. Another thing that disappointed me was that in all these years the tourism map of Jammu and Kashmir had failed to expand beyond the Srinagar-Pahalgam-Gulmarg-Sonmarg circuit. The tourist brochures of Himachal Pradesh literally run into volumes while all that I saw of Jammu and Kashmir was described over hardly four pages including both text and illustrations.

The government of Jammu and Kashmir should realise that lack of infrastructure is always a deterrent to visitors. I wonder why the dynamic young Chief Minister of the state who is so well versed with all that is most in vogue does not deem it fit to expend his energies in this venture. He should be ensuring the development of basic infrastructure in his state instead of constantly keeping his guns trained on security issues that are not in his immediate domain or mandate. In any case, army soldiers are hardly visible in the landscape which leaves one wondering about the reports of human rights violations that do the rounds regularly. Where were the soldiers who are supposed to be committing all kinds of atrocities on terrified civilians? Perhaps I would get to see them once I actually reached the valley, I thought. Here too I was to be surprised.

I chose to take an early morning walk along the Dal Boulevard in the hope of finding it relatively free of tourists and pestering shikara owners. Imagine my surprise when I saw the boulevard milling with people as well as vehicular traffic even at that “insecure” hour. To ward off a particularly persistent tourist guide, I decided to engage him in a conversation. For starters, I asked him how the tourist season had been. Apparently this being a not too busy hour, he could indulge in some banter. He told me that the tourist season was booming. A shikarawala who, a couple of years ago, used to twiddle his thumbs for lack of work, now earned up to sixty thousand rupees in a month. Houseboats and hotels which had, for years, not let out a room for more than Rs. 1000/- a night were now getting thrice as much. Handicraft retails were doing brisk business.

A conversation with my fellow tourists was equally interesting. When asked whether they felt scared of visiting the militancy-ridden state, they responded that they buy viagra online felt very secure since the army was there to ensure their safety. It seems that the Demi-god status of our men in uniform carries everywhere. Overall, there was no resentment amongst the locals or the tourists with the forces that are much maligned in the media, as I now realise, by a select few.

As I made my way back to the plains after a pleasant sojourn in the valley, I read about encounters between terrorists and the army in the outskirts of Srinagar. There was news of terrorists having killed one army soldier and seriously injured another. I wondered again that if AFSPA gave such draconian powers to the security forces, how come they were the ones who were suffering losses. If the security forces can open fire at mere suspicion, how come they waited to be fired upon? It becomes evident that that the unfortunate soldiers operated in a very restrained manner with full regard for the life and property of people in that locality. They paid a heavy price for their humane approach. It is because of this reason that rabble rousing by the likes of Geelani has no effect on the common man and the tourist.

an efficient security umbrella. If he realises this he would be pay more attention to important issues like building a tourist infrastructure in the state which is comparable, at least, to the adjoining Himachal Pradesh.