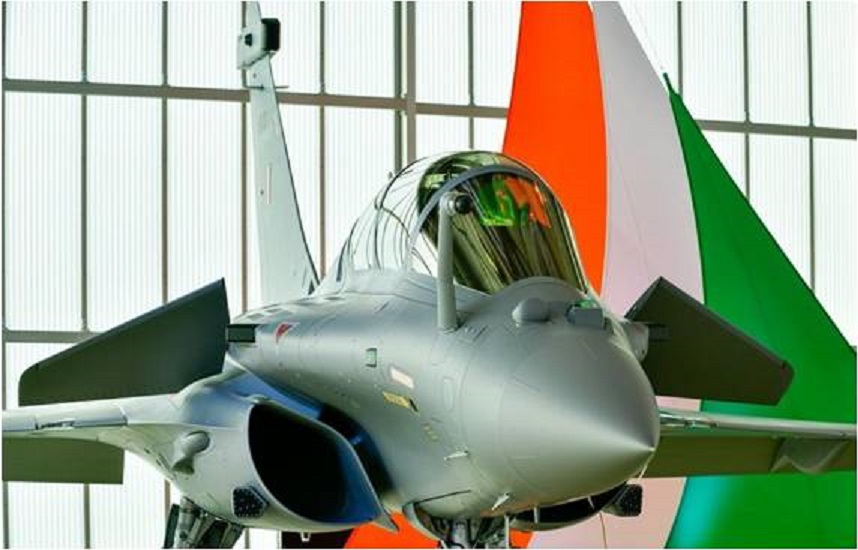 On 27 July 2020  midday, five Rafale, multirole fighter aircrafts took off from Merignac Airbase in Bordeaux , France, for a 7000 kms long voyage to India. The air convoy led by Group Captain Harkirat Singh took a halt at Al Dafra,  a French leased airbase at Dubai (United Arab Emirates) for refuelling, maintenance and mandatory checks. The aircrafts finally landed at Ambala Airbase on 29 July 2020. The Multirole fighters will equip the reactivated “17 Golden Arrow Squadron” which was equipped with MIG-21 fighters and was disbanded in 2016.

The  Rafale is a French twin engine (two SNCEMA M88-2 engines), canard delta wing, multirole aircraft designed and built by Dassault Aviation. Equipped with a wide range of weapons, it is intended to perform air supremacy, interdiction, aerial reconnaissance, ground support, in-depth strike, anti-ship strike and nuclear deterrence missions. It has a combat radius of 1800 kms along with mid-air refuelling capability, speed is almost 2 Mach, service ceiling is about 50000 ft and maximum payload capacity is 9500 kg.

The aircraft has state of art avionics and features, such as direct voice input, active electronically scanned array (AESA) radar and the frontal infra-red search and track (IRST) sensor.

The word Rafale means  “Fire Storm” a definition in keeping with the multi mission role of the aircraft. It is  also called a “Beast with Beauty” by fighter pilots. It has been used in combat over Afghanistan, Libya, Mali, Iraq and Syria with great success.

Rafale was one of the six aircraft competing for the Indian Medium Multi Role Combat Aircraft (MMRCA) tender for 126 multirole fighter aircraft. On 23 September, 2016, India and France signed a government to government contract for the purchase of 36 off-the-shelf Rafale’s with an option for 18 more. The deal includes supply of weapons and spares also.

In January 2016, the Indian government also directed the Indian Navy to undertake detailed briefings with Dassault regarding the Rafale, in a potential start for procurement of the naval version for its aircraft carriers, which could lead to purchase of 54 Rafale naval fighters.

The government wants commonalities between logistics and spares for fighters with the Navy and Air Force following on from the Mirage-2000, whose effective service with IAF played a major role in establishing the reputation of Dassault aircraft, the Rafale will contribute to the defence needs and strategic roles of India.

In 2010, under the UPA government, extensive trials were carried out by test pilots of Indian Air Force (IAF). They were based on approximately 600 technical parameters for MMRCA. Six front line fighter aircrafts of the world were in contention for a 126 fighter aircraft deal. These were Euro Fighter Typhoon (Euro Consortium of 4 countries), Rafale Dassault (France), F-16 IN, Lockheed  Martin(USA), F/A-18 Super Hornet Boeing (USA), Griffin JAS39 Saab (Sweden) and MIG-35 (Russia). In 2011, only two aircrafts, Euro Fighter and Rafale, were selected for the second round by the IAF. In the final financial bid, Dassault Rafale, in 2012,  won the global tender for supply of 126 aircrafts, but the supply order was never issued despite a depleted fighter squadron strength of IAF due to obsolesce of MIG-21, MIG-23 and MIG-27.

Finally, keeping in view the immediate need to build on the operational readiness of IAF for a two front war, the NDA government took a bold decision and signed a government to government contract with the French government on 23 September 2019 for purchase of 36 readymade, fully weaponised Rafale multi role aircrafts.

In spite of the COVID-19 pandemic, the French Government has kept its promise of supplying Rafale aircrafts in time and has thus strengthened the harmonious relations between the countries. This has opened new vistas for defence procurement and collaboration on the basis of mutual trust. It is to be highlighted that Rafale aircrafts  are capable of carrying nuclear weapons.

Rafale are more than a match for Chinese J 16, J17 and the latest J20 (Flying Dragon) stealth Aircrafts. Keeping in view the enhanced deployment of Indian troops along the Line of Actual Control, Rafale air crafts will be game changers should there be an escalation in hostilities.  In no time the beast will be seen cruising over the Karakoram  Range.