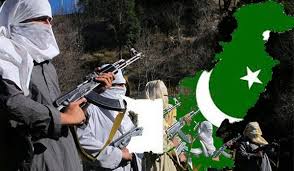 The world in general and the western nations in particular are fast gaining an impression that terrorist strikes, by and large, have a signature of Pakistan in some form or the other. Earlier, there were people like David Headley trained in Pakistan for terrorist activities; in recent times the origin of a fair number of the terrorists involved in strikes can be traced back to Pakistan.

Significant among these is Khuram Shahzad Butt, a British resident who traces his origin to Pakistan and was involved in the gruesome attack on innocent people in London on June, 3.

Earlier, in December 2015, 14 people were killed and 22 injured in a terrorist attack at in San Bernardino, California. The terrorists involved were identified as, Syed Rizwan Farook, an American of Pakistani descent and his wife Tashfeen Malik, a Pakistan born permanent resident of the US.

More recently on May, 24, two persons of Chinese origin Lee Zing Yang and Meng Li Si were abducted from the Pakistani Province of Balochistan and reportedly killed.  The Islamic State operating in Pakistan has taken responsibility for this abduction and killing.

Pakistan’s signature has been visible in International terror incidents, especially so, after Osama Bin Laden was killed by American SEALS on the soil of Pakistan. The international community which was earlier hesitant to confront Pakistan is now openly expressing its indignation and disgust.

“Pakistan is regarded as one of the fountains from which flows a great deal of terrorism affecting these countries. This impression has been created not only in the minds of the people who follow the mainstream news media but has also begun to form in the thinking of those making public policy in some of the more important Western capitals,” is an apt assessment of the situation given by a Sahid Javed Burki, a prominent Pakistani who has been caretaker finance minister of Pakistan and a Vice President at the World Bank.

The disgust being felt by the world is palpable from many actions being taken on ground. It is well known that the relationship between Pakistan and the US is no longer as cozy as it used to be. The US has cut down substantially on the aid being provided to Pakistan. President Donald Trump, mentioning India but not Pakistan while talking about countries that are suffering from terrorism at Riyadh, Saudi Arabia is a significant indication of an even larger policy shift in the US.

A few months back in March, 2017, Congressman Ted Poe, introduced a strongly worded bill in the US Congress named “The Pakistan State Sponsor of Terrorism Act of 2015.” The objective of the bill is to declare Pakistan a state sponsor of terror.”From harboring Osama bin Laden to its cozy relationship with the Haqqani network, there is more than enough evidence to determine whose side Pakistan is on in the War on Terror. And it’s not America’s. It is time we stop paying Pakistan for its betrayal and designate it for what it is: a State Sponsor of Terrorism,” Poe said while introducing the bill.  Significantly, Ted Poe is Chairman of the House Subcommittee on Terrorism. The bill is undergoing the due process of the Congress and will, most likely, be adopted with time.

By not holding bilateral talks with Prime Minister Nawaz Sharif in the sidelines of the recently held Shanghai Cooperation Organisation (SCO) summit in Astana, Chinese President Xi Jinping has expressed severe displeasure at the abduction and alleged killing of the two Chinese citizens in Balochistan.

The Chinese authorities have rejected the correlation between cancellation of the SCO bilateral meeting between the two leaders and the murder of the two innocent Chinese, but the “rejection” is not convincing. Most feel that it has been given in the larger interest of the Belt Road Initiative (BRI). The Chinese President has given out his message to Pakistan loud and clear.

Pakistan does make some weak attempts to remove the stigma of the terror charge. It has kept some known terrorists like Hafiz Saeed under house arrest and has also made a big show of freezing accounts of suspected terrorists and their organisations.

Pakistan wants the world to believe that it has frozen 5000 suspected terrorist accounts amounting to 3 million USD. The fact is that it has done so to avoid coming into the list of an international organisation called the Financial Action Task Force that is scheduled to hold a meeting in Spain shortly. This task force aims to combat money laundering by terrorist organisations. It is, however, felt that the efforts made will not be enough to bail Pakistan out and it will end up prominently in the list of defaulting countries.

Apparently, the world is fed up with Pakistan’s consistent feeding of the terror machinery and is out to tighten the screws on to its activities.

The best option for Pakistan would be to relent from its self destructive path before it is too late. There is only one factor that is coming in its way from doing so and that is the debilitating relationship with India and the need to feed terrorism in Kashmir. It is reluctant to touch many terrorist organisations operating on its soil since they deal with Kashmir. Despite international pressure, terror outfits like the Lashkar-e-Toiba and Jaish-e-Mohammad continue to prosper with relative ease. They have a huge base and adequate generation of funds to maintain the same. Terrorists come from the same stock, they do not differentiate between the Lashkar and the Taliban; so when the Lashkar prospers the Taliban too prospers and thus the cycle goes on.

The sooner Pakistan realises that it’s double dealing policy severely constraints any honest effort towards addressing the challenge of terrorism the better would be its chances of tackling the same. It now remains to be seen if Pakistan can read the writing on the wall and mend itself before it is too late.

(Jasbir Sarai is an AAP activist and reputed security analyst)