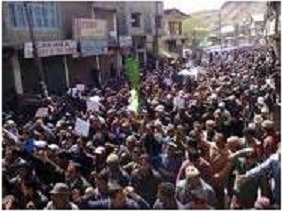 Sajad Lone, the chairman of the Peoples Conference, a regional party of Jammu and Kashmir which has some presence in the Kashmir valley, has conveyed his best wishes to the leaders of the Hurriyat Conference for their upcoming visit to Pakistan. He has expressed the hope that the visit would be productive and would bring India and Pakistan closer towards negotiation, reconciliation and political resolution with regard to the status of the state of Jammu and Kashmir. There is a lot of merit in what Sajad says; Pakistan has to be told the ground realities in Jammu and Kashmir and who better than their old friends of the Hurriyat Conference?

Just a few days back, the Kargil district of Jammu and Kashmir witnessed massive rallies in support of the Shia community of Gilgit-Baltistan and other areas of Pakistan who are facing atrocities and persecution of the worst kind in the hands of the majority Sunni community of the nation. The people of Kargil, being of the same stock as the people of Gilgit-Baltistan and separated because of the unfortunate division of the region at the time of partition, harbour a special affinity towards their beleaguered brethren; Being Shia’s themselves, these people feel the pain of the large community being suppressed and violated in Pakistan for no fault of theirs.

The agitation in Kargil on November, 23, was one of many that have been held in the recent past to focus attention of the State, the nation and the international community on the criminal targeting of the Shia community in Pakistan. This particular protest was held in the wake of a Taliban suicide bomber killing at least 23 people at a Shia procession in the Pakistani city of Rawalpindi and many more in such other incidents. An earlier equally large protest was held not many months back in April, 2012, to protest the infamous Chilas massacre of Shia’s of Gilgit-Baltistan. This indiscriminate killing of the minority community is being carried out blatantly by terrorist organisations like Taliban-e-Pakistan, Lashkar-e Jhangvi,

The people of Kargil are launching peaceful protests through a number civil society groups; prominent amongst these are the Anjuman-e-Jamiyat Ullama Asna Ashriya and its associated Islamia School, Kargil; this is a leading Shia Islamic center of the region. The second prominent group is the Awami Khidmat Gar Committee. The groups may be different but they carry a similar message condemning human rights violations Shia Muslims through the length and breadth of Pakistan by Jihadi-Deobandi terrorists. There is a universal appeal emanating from Kargil to the government of Pakistan to take strong action against the killers of innocents. During the protests speaker after speaker consistently raises the point that the Pakistan army in particular is knowingly instigating the peace loving people of Gilgit-Baltistan along a path of violence so that their extermination may be legitimised to help change the demography of the region. The whole game plan is to bring about a situation conducive for the resettlement of the Punjabi community and of course keep cross-border terrorism directed against India alive for all times to come.

The leaders of these groups want the world to know that the government of Pakistan is failing miserably in providing security to its minority communities including, apart from the Shia’s, Hindus, Christians, Ahmediyas etc. The protests are not without reason; in Pakistan, sponsored and highly secretive organisations like the Lashkar-e-Janghvi, despite being outlawed post the 9/11, have a few hundred cadre on its secret roll with a mandate to go for selective killing of minorities to bring about a Sunni theocracy in Pakistan. These organisations, as mentioned earlier, have the full support of the ISI albeit tacitly and covertly. The Shia’s are a big target since they account for up to 20 percent of the Nation’s 180 million people, in effect the largest minority community. They are also sitting on the most lucrative real estate and mineral wealth of the country which the Punjabi Muslim elite covets. According to human rights groups, more than 300 Shia’s have been killed in Pakistan so far this year in sectarian violence; this figure may be woefully short of the actual since a lid has been put on the activities going on in Gilgit-Baltistan.

Kargil is very much a part of the state of Jammu and Kashmir; so is the region of Gilgit-Baltistan which is legally claimed by India as an Integral part of the state of Jammu and Kashmir. It is the moral responsibility of the entire leadership of the state to join with the people of Kargil in raising a voice in support of the Shia’s of Gilgit-Baltistan and do everything possible towards ensuring an immediate cessation of the atrocities being committed on the innocent minority communities of the nation. This moral responsibility extends to the Hurriyat Conference also since it professes to represent the people of Jammu and Kashmir. There is no way that the Hurriyat leaders can ignore this very significant and very serious reality.

The Hurriyat would definitely be expected to extend support, both political and humanitarian to the Shia’s of Pakistan in general and the people of Gilgit-Baltistan in particular, against the by now well known fascist designs of the immoral government of Pakistan. Now it remains to be seen whether the Hurriyat leaders can build up the courage to broach this sensitive subject with the government of Pakistan during their visit to the Nation. Here would lie the acid test of the policies and principles that guide the political path of the conglomerate; are they for the whole of Jammu and Kashmir or only for themselves and their few cronies in the Kashmir Valley.