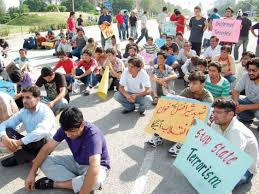 Gilgit-Baltistan has gone through yet another sham of an election for its so-called Legislative Assembly! The Gilgit-Baltistan Legislative Assembly was formed on the basis of the Gilgit-Baltistan Empowerment and Self Governance Order, 2009. This order has no legal sanctity since it is a mere executive directive signed by the oppressive Ministry of Kashmir Affairs & Northern Areas. It has not emanated from the federal National Assembly and the Senate as should have been the case. Since the power to amend the order continues to remain with the Ministry that has signed it, the process of revocation has been kept open.

On the face of it, the order was designed to grant self rule to the deprived region, through the medium of a legislative assembly. On ground, no worthwhile power has been vested upon the assembly constituents.

The exercise in futility becomes even more infuriating when seen against the backdrop of the fact that the so called “province” is represented neither in the National Assembly of Pakistan nor in the Senate.

As in the case of Pakistan Occupied Kashmir (POK), a trend was set in the very first election of the Legislative Assembly, whereby, the party in government in the country secured a majority through blatant rigging. It was no surprise that PPP sailed through the first election with a clear majority and this time round, it is the PML (N) that professes to have won the hearts of the people convincingly. It has won the election by a massive margin of 22 out of the 33 seats, giving a reasonable idea of the level at which the rigging was carried out.

Unconcerned about the disapproval that this blatant political fraud will invite from the international community, Prime Minister Nawaz Sharif has appointed Hafeezur Rahman as the stooge Chief Minister, with a six member cabinet of puppets to assist him.

The outgoing government led by the PPP nominee, Mehdi Shah, had lobbied strongly for autonomy in the financial mechanism of his government. He had demanded a share in the award of the National Finance Commission (NFC) and the permission to collect GST and custom duty, as in the case of the other Provinces of the country.

“At present, we are like beggars. What is the harm if, constitutionally, we are given our financial share under the NFC award, or [if we are allowed] to collect our own revenues in our own territory,” he is quoted to have said in a moment of extreme frustration.

Now, leveraging on this demand, the federal government in Pakistan, under Prime Minister Nawaz Sharif, is set to commit on the people of Gilgit-Baltistan the biggest wrong ever. It has prevailed over the Gilgit-Baltistan Supreme Appellate Court Bar Association to issue a demand for grant of a “Provisional Province of Pakistan” status to the region till the decision of Kashmir dispute comes by.

The Nawaz Sharif government is now working overtime to see this “proposal” through. Now that PM Sharif has a pliable government in place, he is bound to give more energy to the initiative.

It is quite apparent that this move will change to course of history by sidelining India’s claim on the region. It will also go against the spirit of the UN resolution on Jammu and Kashmir that Pakistan is so fond of quoting in all international forums.

The people of Gilgit-Baltistan are raising their voices against this immoral proposal.

“Something fishy has been cooking behind the curtains. We should remain cautious and vigilant as in past to foil such designs and oppose the division of Jammu and Kashmir tooth and nail,” says Shakeel Ahmed Bakshi, of the Islamic Students League.

The Kashmir separatists, who are the best friends of the Pakistan government, have also spoken against this move; all except Syed Geelani, of course, who cannot ever speak a word against his beloved Pakistan.

Pakistan needs to give autonomy to the region and such rights and freedoms as are being enjoyed by the citizens of Jammu and Kashmir under the Constitution of India.

The steps that Pakistan needs to take in this direction include restoration of the State Subject Rule (SSR) that was revoked in 1976. It is by doing so that the Government of Pakistan will assure the people of Gilgit-Baltistan that their interests stand adequately safeguarded pending resolution of the disputed nature of the region. Pakistan has to assure the people that they will not be financially exploited and nor will they be displaced by demographic engineering.

Government of Pakistan should not hesitate from giving to the people a proportional share in the income being generated from the resources of the region as has been demanded for many years now. For this, grant of a provincial status is not necessary, legislative autonomy would be sufficient.

It has to be kept in mind that Gilgit-Baltistan is a disputed territory, deprived of self-determination for the last 68 years. The people there are now tired of living like a virtual colony of Pakistan. They are well aware of the manner in which their resources are being exploited.

It is incumbent for Pakistan to undo the wrong that has been done to the people and not further escalate their misery. Continuing with ad-hoc and cosmetic arrangements is not going to assuage the aspirations of the people. An increase in agitations over there is not in the interest of Pakistan as the nation is facing unprecedented turmoil in its other provinces also. The international community, under the leadership and initiative of India, must stand by the people of Gilgit-Baltistan and ensure that Pakistan follows a humanitarian and righteous path.