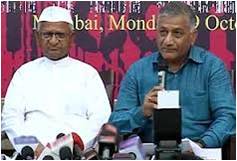 General VK Singh, former chief of army staff of the Indian army has, on retirement from service, been involved in a number of public initiatives. He has shared a dais with social activists and some political organisations on issues of national importance. As has been the trend over the last few years, the actions of the retired general have been subject to intense media debate and speculation. Will he join politics? Is it appropriate for him to join politics? Are the statements that he is making against established norms unbecoming of a retired Army chief? Is he with the social activist movement of Anna Hazare or the RSS or some other political party? Is his call for dissolution of Parliament unbefitting of a man of his stature?

Before coming to the man himself there is a need to address the larger issues that the debate has thrown up. These pertain to the democratic rights and privileges of the community of soldiers in India. Why is it that when it suits some lobbies the armed forces are put on a different pedestal and for all other matters they are considered to be at par with other services and the common man? a retired chief is keen to take up social activism in areas that he feels are of importance to the Nation and it is being said to be against some farfetched code of conduct of the armed forces; at the same time the government is going overboard in equating the Para-military with the army and doing everything else possible to divest from the service its traditional privileges on the premise that all services should have a level playing field.

While General Singh follows his desired path, the community of soldiers needs to collectively search for its own identity in the changed equations of the country. Indian soldiers are subject to a different law under the Army Act and also subject to the civil law of the nation. Now there seems to be an urgent need to draw an identifiable line of demarcation between the two since the poor soldiers are suffering the worst of both laws. Are they soldiers first and Indians later or Indians first and soldiers later is the question which should excite all stake holders? Presently, the most apt description would be – none of the two raising serious doubts about their status in Indian society.

It is in this context that the actions of General Singh need to be seen? Why on earth should anybody in India have anything to say about whatever course he wants to follow so long as it is within the ambit of the established law of the country? Why does the nation expect or want him to be any different from any other citizen simply because he chose to dedicate a better part of his life to the defense and security of the nation and in so doing reached the pinnacle in his chosen line of work? In case he wants to do something different post retirement why is it being looked upon as an oddity? he is just an Indian citizen concerned for his country and expressing his concern in the manner that he feels is best, what is so extraordinary in this? The media blitz is nothing more than an invasion of his rights and privileges. All soldiers need to be concerned since this would be the fate awaiting them in case they decide to move on this very correct and righteous path.

Even more insufferable are the comments against the General that are emanating from within the soldiers community itself. Some news reports have suggested that serving officers are disenchanted by the Generals activities. This is, in all probability, a case of biased reporting. Even a novice would make this out as a deliberate attempt by some vested interests to pressurise the General; this could possibly be the handiwork of some entity whose interests are being threatened. However, if such comments have been passed they stand out as overtly judgmental and uncalled for. What right would such persons have to become guardians of the morality of someone who is elder to them in age and way ahead in stature? They should stick to their work and leave the general to his own. Similarly, the retired fraternity of soldiers should respect the decision taken by their compatriot and let him go his way as they would expect him to let them go their way; either join him or let him be.

The next question is – what is it that the naysayers have against General Singh and his personal decisions? He has yet not stated any intention of joining politics or a particular political party, so why the speculation? He has not confirmed that he would be a part of any “gherao of Parliament” as is being widely written about so why the excitement? if he does join the gherao how would that be any different from any of the regular protests that happen all the time in the capital? How does a call for dissolution of the Parliament become an attack on the Indian constitution? Many members of the parliament itself call for its dissolution all the time so if General Singh has done so what is the big deal?

Even if General Singh joins politics he would not be the first soldier in India or the world to do so. General Shanker Roy Chowdhary has been a Member of Parliament, was that not a political decision? Are Governors not political appointees? In countries like the United States Generals have risen to be Presidents. There seems to be an obscene attempt to put down General Singh simply because he is a soldier who wishes to stand up for a nationalist cause. Probably his actions are causing a huge sense of insecurity to certain sections of society very scared of the honest voice of a soldier. Such machinations should have no place in a vibrant democracy like India.