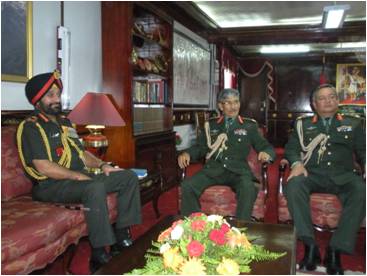 The Indian army chief, General Bikram Singh, is presently on a visit to Nepal on the invitation of the Chief of the Nepal Army, General Chhatraman Singh Gurung.

In a reciprocal gesture since 1965, the Indian and the Nepalese armies traditionally honour each other’s chiefs by conferring the honorary rank of general on each other. The tradition was discontinued after the 2005 royal takeover but resumed again when the Nepalese army chief was conferred the honorary rank of general of the Indian Army by President Pratibha Patil in December, 2009. A similar honour will be extended to General Bikram Singh by the Nepalese President, Ram Baran Yadav, in the course of this visit

The Indian army chief’s visit assumes special significance in the light of enhanced defence and security cooperation between the two countries and strengthening of the traditionally positive bilateral relationship with Nepal. The Nepalese army has evolved a comprehensive itinerary for the visiting dignitary which involves extensive briefings on the current situation in the country, meetings with the President and the Prime Minister of Nepal apart from other high ranking officers.

General Bikram Singh laid a wreath at the Bir Smarak at the Nepal Army Pavilion in the Tundikhel area in the heart of the capital. He will visit some of the Nepalese Army’s training centres, including the Birendra Peacekeeping Training Center at Panchkhal and Mountain Warfare Training Centre in Mustang. He is scheduled to inspect an Indian Army Pension Camp. He is also scheduled to visit the birth place of Lord Buddha in Lumbini and address the 19th command and staff course cadets.

The two chiefs, during their one to one meeting, discussed a range of subjects including training and courses, UN peace keeping, disaster management, sports, adventure activities and defence industry cooperation. Both sides have indicated a desire to work towards building mutually beneficial defence cooperation.