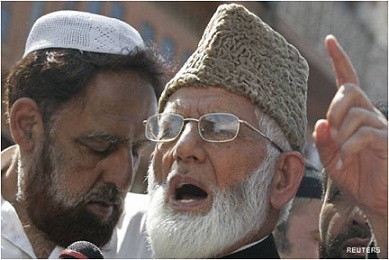 With the winter in full swing and the people of Kashmir opting for the warm comfort of their homes the separatists leadership, true to tradition, has deviated from its usual practice of rabble rousing on the streets and launched a verbal onslaught on the world in general, the Indian Union and the central/state governments. For the past few years the trend has been to garner media attention by giving provocative statement and holding seminars etc where some maverick, publicity hungry activists spout self righteous venom which is high on rhetoric and low in substance.

This year is no different and Syed Ali Shah Geelani is, as usual, leading the pack. The month of December has witnessed a spate of statements from him. He has blamed the government of India for “Social engineering” simply because some Panchayat leaders were taken out on a tour to other state. He has also voiced concern with respect to the holding of a music concert in Kashmir University, an act which, he feels, has the potential to “mutilate the Muslim identity of Kashmir”. If the world were to go by Geelani’s ideas then nobody would go to Kashmir for a holiday for fear of being indoctrinated into the Kashmiri culture and music would become taboo in order to save the younger generation from evil influences; absolutely incredible.

As expected, nobody has paid much attention to Geelani’s infantile trash. There were no panel discussions on television to debate his views; no newspapers of substance gave him any space. This complete lack of media interest seems to have caused considerable frustration to him and propelled him to launch the second phase of his winter programme by organising a seminar in Kashmir on December, 24.

Due to complete lack of a forum, Geelani had no option but to come forth as the main speaker. He built the base by roundly castigating the government and the Congress party for all the supposed ills that, he feels, plague his homeland. He then dropped the bomb shell of the day by calling Ghulam Nabi Fai an ambassador of Kashmir. “India’s embassies across the world are lobbying for their stance on Kashmir, but if Dr. Fai was organizing meetings, conferences, in which Indian intelligentsia also participated, to highlight the Kashmir issue, it was not a sin. He was pleading the genuine cause which is supported by the resolutions of United Nations,” said Geelani rather forcefully. He culminated his diatribe by passing a resolution in support of the maverick doctor.

It is common knowledge that the arrest of Ghulam Nabi Fai on July, 19, by the Federal Bureau of Investigation in US has opened yet another Pandora’s Box. The great Indian liberals, whose heart bleeds for a small separatist segment of Kashmir, started falling one by one from their high moral chairs as the views on Kashmir propounded by them were exposed for their fallacy and duplicity. It became apparent that on the one side Pakistan had infused millions of dollars to build up a campaign of misinformation against India and exploited the same to gain support of US and Europe and on the other hand it continued to project itself as a bigger victim of terror. There cannot be a better example of double speak. Now Geelani wants to give legitimacy to this crudest form of lobbying.

Further, India intelligence agencies have credible evidence to believe that there is a financial linkage between Fai and certain organisations in the Valley. There is a firm belief doing the rounds that Fai was not only using ISI funds to discredit India in global forums, but was also passing on funds to militant and political organisations in the Valley. Intelligence agencies have already launched an investigation and have unearthed a series of complex financial and Hawala transactions which point towards his nefarious activities. There is a distinct possibility that the Kashmir American Council which was being run by Fai with ISI funding was possibly one of the conduits for financing some segments of the Hurriyat and this could be the reason behind the support that Geelani is extending towards Fai.

The government needs to act to contain the verbal onslaught unleashed by secessionist forces in the Valley on the collective Kashmiri psyche? The Indian security forces have managed to sustain law and order in the State despite many attempts to disrupt the same. This endeavour has to be supplemented with rigorous efforts to bring about psychological integration of the people of Kashmir, especially the youth, with the rest of India. At the same time, the misinformation being created through motivated campaigns by Pakistan sponsored elements has to be vigorous dispelled and the realities on ground have to be given credibility.

It is also necessary to look at legal options to contain the free flow of propaganda that is happening in Kashmir. If the US can act against Fai because he was carrying out activities which are detrimental to Indian interests than why can the Indian government not muster the will to counter blatant anti-national and secessionist activities. The people of Kashmir also have to decide the direction in which they want their life to move. Is it proper for them and their motherland to be associated with international pariahs like Fai? How will such a scenario impact their image and business? At this stage, any kind of upheaval which disrupts the momentum of peace and prosperity should be challenged at all cost. It is time to be more objective in identifying what is good for Kashmir and what is not, Fai definitely is not and all those who think otherwise are not well wishers of the Kashmiri people.