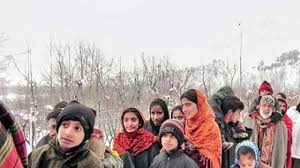 The recent killing of 12 terrorists in Shopian district of Kashmir is very rightly being hailed as a successful operation which will break the backbone of terrorism in the region. There is also a realisation that terrorism, though greatly reduced, has now taken a local sheen; all the killed terrorists were local youth.

The situation brings forward an urgent need to engage with the youth and wean them away from the desire to pick up the gun for a non-existent, self destructive cause. There is a need to look deeply into the reasons behind the frustration that leads the youth towards pursuing mindless violence, and taking all necessary steps to stop the same.

A major reason behind youth becoming terrorists is the lack of economic opportunity which leads to unemployment and frustration. Kashmir is experiencing a “youth bulge,” where 71 percent of the population is under the age of 35. Sadly, a large section of population between the age of 18 to 30 in the Kashmir Valley, an estimated 48 percent, is currently unemployed.

The fragile socio-political landscape, affected by continuing violent conflict and instability, has created a deep sense of uncertainty amongst the local population, particularly the youth. Kashmiri youth have grown up in this adverse environment and have faced tremendous stress. Feeling of desperation, anger and helplessness is largely prevalent among them.

Pakistan exploits the situation by carrying out well honed, effective propaganda to stoke fires of dissent and dissension. Many youth get swayed by the false propaganda and adverse publicity.

While the Army has played the role of a protector, well conducted propaganda by the enemy has led to the force being seen by Kashmiris, particularly the youth, as an instrument of Government of India’s policy to curb their freedom.

The government has launched a number of schemes to provide employment to youth in the state. Infrastructure in terms of schools, colleges, community development centers, ITIs etc. has also been established to impart quality education and generate self-employment opportunities. Besides, a good amount of stress has been laid in the field of sports to encourage the young to channelise their energies in the right direction and also pick up sports as a career.

Winning “Hearts and Minds” of the locals by undertaking a large number of civic initiatives is an integral part of Army’s activity in the state. Stress is being laid on constructive engagement of youth to mitigate the venom instilled in their minds.

Various separatist groups in Kashmir have conveniently exploited the sentiments of youth and misguided them for their own selfish gains. They lose no opportunity to exploit sensitive situations, disrupt the functioning of government and engineer deterioration of the law and order situation. They look for opportunities to use propaganda as a tool for their nefarious designs.

Some segments of the media in Kashmir act in a manner that causes damage to the psyche of the youth. For sensationalist copy it overplays violence; in some instances, for the sake of monetary gains, it exaggerates facts in a manner that shows the state and the security forces in poor light. All of this contributes towards instigating the masses, particularly the youth.

The solution to the issues lies with the people. They have to generate the will to give peace a chance so that the development activities can be carried forward. With development will come jobs that will channelise the energy of the youth towards productive pursuits.

The state government, the elders and the civil society of Kashmir have to play a vital role to removing the prevailing feeling of hatred and frustration that envelopes’ the youth of the Valley. This is undoubtedly a long term process but a beginning has to be made.

It cannot be denied that the government is attempting to remain focused on the issue development despite the law and order challenges. Launching of employment generating programs like ‘Hamayat’ and ‘Udan’ are steps in the right direction. A lot more, however, needs to be done and that too in a time bound manner.

Education needs to be given priority! Curriculums have to be designed in a manner that the youth gain confidence to compete at the national and international level. More and more students need to be sponsored for education in other states to widen the base.

The passion that the youth have for games needs should be leveraged. Searching, nurturing and talent should be followed with providing opportunities to compete within the state and in larger platforms.

The government needs to create an environment to encourage more investment in the state, especially in private sector, which will increase employment opportunities for youth.

Army, by virtue of its vast organisation and spread in remote places, continues to hold potential for playing a vital role. Efforts by the army to reach out to the youth have been well appreciated by Kashmiri society. This is an area that needs more traction since it will accrue the best results.

There is a need to bring about a realisation that the Army and other security forces have, with great effort over a sustained period a of time and with tremendous loss of lives of soldiers, brought down the levels of terrorism to a threshold that allows the apparatus of the state and the society to function in a modicum of normalcy. There are still terrorists to be tackled but the numbers are comparatively small and reducing by the day.

It is equally important to side line the separatist groups responsible for constantly installing hatred amongst the youth. This can be done by exposing their leaders who have been carrying out false propaganda to suit their agendas.

Media too needs to be motivated to channelise it power and energy in the right direction. It can play a key role in reducing the venom that exists amongst the Kashmiri Awaam by bringing forth true facts.

Youth should become the centre of gravity of the government policy to curb terrorism in Jammu and Kashmir. Sincere efforts in this direction have the potential of changing the socio-political landscape of the trouble torn region.

(Farooq Wani is a senior journalist)