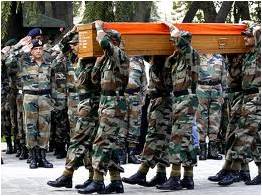 The security forces in Kashmir launched a massive operation in Kralpora forests in the frontier district of Kupwara, Kashmir, on September, 26, 2011. The operation was based on specific information about the presence of terrorists in the Awathkul forest area in Kralpora forest. A siege was laid by 18 Grenadiers of the Indian army in coordination with a contingent of JK Police. The terrorists fired upon the advance party of the troops which was retaliated, triggering a fierce encounter over a period of four days. More troops had to be rushed so prevent the terrorist from fleeing the area under the cover of darkness. By September, 27, five terrorists had been killed while four security personnel laid down their lives. These included a young officer, Lieutenant Sushil Khajuria, who was a son of the soil, belonging to Samba District of Jammu and Kashmir. Two army Jawans and two Special Police Officers also lost their lives in the encounter. The last few months have witnessed enhanced activity towards infiltration and escalation of violence in the Valley. This is the time for the people of Kashmir and the entire Nation to support the security forces who are involved in a do or die battle against a resolute and barbaric enemy.