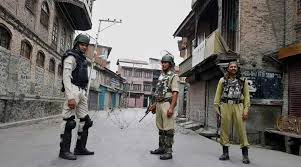 Counter insurgency implies countering the insurgents – who are always proactive and keep seeking soft targets. On the contrary the security forces keep looking for the needle (terrorists / insurgents) in the haystack (innumerable public). The search tends to lose impetus due to poor results over extended periods. Complacency thus sets in thinking all is well. A false psychological veil develops amongst the security forces who begin to overlook procedures.

The pattern of terrorism established over the last 30 years in Kashmir, wherein, the peaks and troughs of their activities in summers and winters are well known are also overlooked due to non institutionalised approach and short lived memories. Political masters have over the years become complacent on the Kashmir issue since they have run out of ideas/options of how to tackle this menace.  Making tall statements during critical periods and crisis management times are common. However these too are forgotten when the dust settles! Martyrs/bodies are given respectful departures with media hype to soothe the public psyche. Martyrs keep increasing but their families are left to fend for themselves. Rioting, candle lights and political statements/debates build up a crescendo, but fall flat abruptly.

Indian memories are short-lived. Complacency sets in when memories fade away. Chitti Singhpora, Nagrota, Kaluchak, Kargil, Uri, Pathankot and now Pulwama will once again get buried in the memories of Indian public and politicians.

Common questions as to when peace will return and how & when will the bloodshed stop remain unanswered. However these too get overshadowed by political infighting and lack of political will/desire to resolve this issue.

How do we deal with this menace?  Nobody in Delhi has the answer to include National Security Council, Army HQs (Director General Military Operations), National Intelligence and Investigation Agencies.  These establishments get into a muddle of numerical counts while a large disparity remains in the field of military thinking.  State Governments and political parties make hay while the sun shines and the opposition parties keep calibrating militancy both during lean and critical periods. Pakistan and ISI, however, are NOT complacent! They remain extremely proactive.

30 years is a long time to realize that old thinking, measures adopted and strategies both at Strategic and Operational levels have not accrued the desired results. “Iron Fist in Velvet Glove” and Sadhbavana have been tested; they have not achieved the desired degree of success. This needs to be understood by the military thinkers. Security Forces cannot solve this problem by themselves.  New measures that are proactive, aggressive and dynamic have to be instituted. SF have to think ahead of the terrorists. When measures which were adopted at the tactical level succeeded they came under the heavy hammer of Human Rights. Major Gagoi’s method to save the situation with a person tied in front of his jeep led him to be ridiculed at the national level. Where and what are the human rights after Pulwama attack? Can anyone answer now?  With this level of confusion at the Strategic level only God can save us.

Lack of political will and foresight over the last 70 years has subjected our SF in J&K to death and hell. How long can political desires of Nationalist parties trample the saviours of our Nation?  India has failed miserably to prove to the world that Pakistan is exporting terror in our State. The UN has failed to set things right or provide support or options. We don’t need to prove this to anyone, the world is not blind. This is our war and we need to fight it ourselves to bring an end to this issue, especially when all  bilateral and /diplomatic  measures too have failed. Time has come to unleash action instead of words.

Kashmir needs an Israeli approach or the well tested Punjab approach. This approach should be the preliminary method put in place to break the back of terrorists, radicals, fundamentalists OGWs as also the local political parties. The main thrust should be on a swift military offensive to capture POK.  Now that the opposition and the Nation stands united to teach Pakistan a big lesson and recapture the balance of J&K. The Cabinet Committee on security (CCS) must launch a firm directive to execute an offensive into Pakistan rather than promising that we shall teach them a lesson.

The war, since 1947, is active and on with the troops of either side sitting across the LC since last 70 years, with calibrated firing on a daily basis. This war needs to be completed by a final plunge. Indians should not forget that Pakistan was carved out of erstwhile Indian Punjab and portions of Sind. It is time to even test Pakistani nuclear irrationality and tolerance levels or the so called overhang to call the Pakistani bluff. Moreover there is a dire need to break the myth of Pakistani Army to ensure a peace loving neighbourhood.

This is the last opportunity that has come our way and needs to be cashed immediately, failing which, we will never be able to kill the snake. Another such attack in the near future where our SF are mercilessly butchered/beheaded will prove that our policy makers and Politicians are scared and  self-centered  with no respect for the sacrifice by our SF, their honour as also the Sovereignty of the Nation.