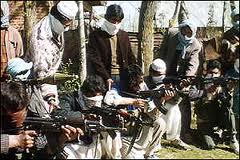 Educated youth of Kashmir joining the ranks of militants and terrorists is a story that is gaining momentum. A disquieting picture of a region returning to a dark period that it is trying to forget is being painted by vested interests. The whole process started in end May this year when one Sajad Ahmad, a post-graduate in Islamic Studies and an MCA student in Kashmir’s Islamic University of Science and Technology, who was said to have joined militancy in 2009, was killed by security forces in Pulwama, South Kashmir.

About two weeks later on June, 12, Chief Minister Omar Abdullah, on the sidelines of a police function in Srinagar, said that highly qualified youth in Kashmir have started joining militancy and it is a matter of concern. “We have also found that militants killed in recent encounters were qualified and most of them were products of Kashmir University and Islamic University,” he said. The Director General of Police, Ashok Prasad, realised that the statement would create issues and made a valiant attempt to tone down the comment the very next day. ““Initial investigations have not substantiated media reports suggesting that a large number of educated people were taking up arms in the state.” He said. He then proceeded to play a face saving card for his boss by saying that a detailed investigation into the phenomenon was being carried out.

This statement of the Chief Minister, however, opened the media floodgates. The first to comment was, as always, Syed Ali Shah Geelani. “Stubborn approach and the denial of political space has left our youth with no option other than arms and sacrifice their lives,” he said in response to the statement made by the Chief Minister. Mufti Mohd Sayeed stated that educated youth joining militancy is a failure of leadership and called for strengthening of democratic and civil institutions in J&K. Evidently, the mainstream opposition and the separatist leadership were not ready to let a golden opportunity to corner the government go by regardless of the damage that it would do to society at large.

Jihadi and militant lobbies were quick to identify the huge propaganda potential of the issue and the possibility of actually motivating educated youth into the fold of terrorism by creating an aura of a mass movement. The end result was a massive media campaign. All valley based newspapers, suddenly and surprisingly, carried a series of article over many days giving instances of young educated people taking to arms voluntary. A plethora of reasons were given for the same; police high handedness; victimisation of the region; execution of Afsal Guru were predominant.

A portion of one of the articles, “Qualified youth joining militancy” by Ali Muhammad Dhar carried by Greater Kashmir, a Kashmir based English newspaper on June, 24, will clearly elucidate the propagandist nature of the content posted. Dhar writes, “Our educated youth, while going through the history of recent past, say from 1947, find it replete with tales of betrayals, breach of promises and commitments, denial of justice and democratic rights, tremendous erosion of our constitution and autonomy, and indiscriminate loot of our natural resources. They watch helplessly the endless loot and vandalization of their forests. They see the electricity generated from their waters being transmitted to other northern states and they are made to pay through nose for whatever little electricity they are provided. Besides, they see incidents of massacres and mass rape, enforced disappearance of thousands of their brothers, custodial killings, unnamed mass graves, enforcement of draconian laws, and denial of political space to leaders who are generally put under house arrest.” By what research and analysis the writer reached to the conclusions that he so confidently carried in his piece is not known, but the motive of igniting passions is very clear.

Only a few days back on August, 20, Reuters posted on their website an article by Frank Jack Daniel titled, “In Kashmir, angry youth flirt with armed militancy.” The article starts with a story of a terrorist Ishfaq, whose full name and credentials have been withheld ostensibly for reasons of security. Ishfaq is said to be an erstwhile stone pelter who is contemplating joining militancy and taking up arms. “In the last three or four years they have tried to criminalise protesters and curb public speaking. Unfortunately this pressure and violence from the state is starting a new sense among people where violence is getting legitimised,” he is quoted to have said. The article has been picked up by a large number of Kashmir based newspapers and websites – Kashmir Monitor, Kashmir Dispatch, Kashmir Life to name a few. Some have given credit to the writer other have carried it as their own. The writer may have done the story to give a professional input but the intention of those who have picked it up was misinformation; they used the piece as a motivator for educated youth to take up arms.

When CM Omar Abdullah raised the subject he said that there is a need to do an analysis. Indication of any State sponsored analysis is nowhere available while non state actors with anti-National leanings are exploiting the issue with motivated coverage.

There may be a few educated youth who are being attracted towards the path of terrorism but this is nothing new; it was happening earlier also. Now an attempt is being made to depict the same as a new wave in the cult of militancy with the intention of giving a psychological boost to the recruiting process. Be that as it may, It has to be ensured that even one person does not proceed on this self defeating violent path. For this the government, civil society, families, teachers, educational institutions have to engage the youth positively and ensure that they do not get carried away by false propaganda. Peace that has come by with great difficulty and many sacrifices cannot be allowed to be held hostage.