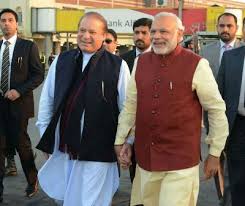 It was not a surprise stopover when Prime Minister Narendra Modi landed in Lahore from Afghanistan to meet and greet his Pakistani counterpart Nawaz Sharif on his 66th birthday. It was the visit shrouded in secrecy. Since the PMO has taken over reigns of foreign affairs with National Security Advisor Ajit Doval at the helm, diplomacy has acquired a new meaning. Status quo has been replaced with unconventionality. It has its advantages as well as pitfalls. Indo-Pak relations have been mired in such deep mistrust that one needs to go beyond the run of the mill approach. It has been 68 years and the political establishments of both the countries view each other with suspicion. This is one reason why there has been very little progress on issues which bedevil bilateral ties.

Barely hours into the meeting of the two leaders, had hawks from both the countries started dwelling on mundane issues puncturing hopes of renewed bonhomie. Instead of concentrating on the high points of the visit, there was meaningless debate on who was more generous between the two or who took the first step? Or was it Modi who first expressed his desire to meet Sharif or the latter who invited him to drop by since he was in the region? Come on! Be a good sport and give them some time.

That the two leaders decided to meet, impromptu or under a well-crafted strategy, is immaterial. What matters is that it is a good beginning. What bureaucracy can’t achieve, sometimes a meeting between the two heads of the states can do wonders. Such meetings devoid of any agenda can break the ice and bridge the trust deficit. As long as the two countries view each other with suspicion it will be difficult to overcome roadblocks. Such meetings also give a new direction to the people involved in the decision making that there is a desire on the part of the leadership of the two countries to move ahead.

Both the countries have gone to wars three times, twice over the disputed Kashmir, and had a brief armed conflict in Kargil. Did any of the two countries gain anything? On the contrary, the international community always keeps its fingers crossed fearing a nuclear war between the two. Both the countries are seen as villain to global peace. It is high time both New Delhi and Islamabad display a matured leadership and shrug off world’s concerns and make a new beginning.

Now that the first step has been taken, the two countries should try to redefine their relationship by taking up issues which are less complex in nature. As they grow in confidence, they can approach complicated issues. Trade, for example, appears to be a low-hanging fruit where both the countries can make tremendous progress. Better trade ties will act as a deterrent against any misadventure. Pakistan can reciprocate by granting the long-awaited MFN status to India which will be a win-win situation for both the countries. What’s strange that Pakistan continues to import goods from India, but via third countries, thus inflating its import bill. Pakistan, which has been importing several items from other countries, can do so from India saving on its transportation costs and high-cost imports.

Both the countries should learn from Indo-China relations. In spite of decades of stand-off and a war over border, New Delhi and Beijing have made giant progress in several fields, particularly in bilateral trade. Today, both the countries stand together at world forums to take on the powerful West on issues of common interest. They have not let their border dispute come in between their relationship.

Then there are humanitarian issues of fishermen who inadvertently cross over to each other’s waters. A mechanism can be worked out so that fishermen of both the countries are not detained for long. Easy visa regime is another area which can be looked into as people have families in both the countries.

And what about cricket diplomacy! One of the easiest issues could be the resumption of cricketing ties between the two countries. The love and affection that the cricketers are showered with when they travel to each other’s country is unimaginable. It will not only improve people-to-people relationship but may prove to be a game changer.

But the road ahead is not hunky-dory. Both the leaders will have to encounter several roadblocks. The renewed bonhomie between the two countries may not be music for terrorists who may feel threatened that Pakistan may turn its back to them in future. The terrorists have always responded ferociously whenever Pakistan was forced to take action against them. Pakistan may have nurtured them as their safe assets, but they are increasingly becoming its liability. As the world unites against terrorism, Pakistan will have to take a hard call. It would not like to be seen bracketed as “with us or with them”.  Pakistan’s seriousness in improving ties with India will also be tested in future. It is then that terrorists may carry out some spectacular attacks against India forcing the two countries to retrieve to its “no-talks” position. This is one scenario which will weigh heavily in any future engagements between the two countries. Will India under the hardline Hindu party government not forced to call off talks and take jingoistic stand? India can weather such an attack if it is convinced that Pakistan has stopped providing oxygen to terrorist groups and that Islamabad has no direct hand in it. But for that to happen, Pakistan will have to prove its credentials.

Back home, Modi will have to take the Opposition into confidence as he moves ahead with his kind of diplomacy. For, there seems very little opposition to their meeting in Pakistan. In India, the Opposition has cried foul as the Modi government has taken a complete U-turn as far as its policy with Pakistan is concerned. The Opposition will pester the government which is being seen as yielding too much and too soon to Islamabad without any tangible change on the ground. Perhaps the BJP would also have reacted in the same fashion had it been in opposition. Therefore, Modi will have to reach out to the Opposition and use his charm offensive to bring them on board. Modi might have pulled off a diplomatic coup but the success of such an adventure will depend largely how he mends the frosty relationship with the Opposition. Equal responsibility lies with the Opposition to give Modi a fare opportunity as he tries something different from the time-tested old formula. There is no doubt that India-Pakistan relationship is very complex in nature. But every complex problem has its solution also. It is time both the countries display maturity and self-confidence to do business with each other.

(Vikas Khanna is a senior journalist)