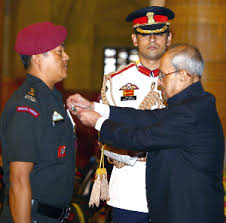 On Independence Day, 15 August 2015, the President of India, on behalf of the citizens of the country and in accordance with tradition, acknowledged the contribution of the armed forces of the nation and bestowed its deserving soldiers with gallantry and distinguished service awards.

The awarded of two Kirti Chakra, five Saurya Chakra and 50 Sena Medals, eight of them posthumously on this day,  aptly demonstrated the high level of courage and commitment of the soldiers.  Five months later on 26 January 2016, on the occasion of Republic Day, the soldiers won one Ashok Chakra, two Kirti Chakra and eight Shaurya Chakra of which four were posthumous. The gallantry awards are a tribute from the Nation to its brave soldiers through the office of the President.

The nation is also forthcoming is paying tribute to its martyrs, who sacrifice their very lives in the line of duty during operations; mostly in terrorism inflicted areas, along the line of control and the International border with Pakistan and while serving in inhospitable terrains like the Siachen Glacier.  People turn up in large numbers to pay homage to the brave hearts.

That a nation acknowledges the sacrifice and hard work of its soldiers is a good sign. It motivates the soldiers who are called upon to give more to the country than anybody else to do so willingly and with pride. Unfortunately, the national sentiment is not reciprocated in equal measure when it comes to giving financial compensation.

There exists a glaring disparity in the manner in which the state governments perceive their heroes. Let us take just one example of the highest gallantry award – the Param Vir Chakra (PVC). A recipient of PVC who hails from Punjab and Haryana will get a grant upwards of INR 30 lakhs from the state government, a soldier hailing from Rajastan will get upwards of INR 20 Lakhs and also some irrigated land. On the other hand, a soldier hailing from Gujarat, Jammu and Kashmir, Karnataka, Odisha, Sikkim,West Bengal will have to remain satisfied with a meager INR 22,000 plus.

The parameter used by the states for fixing the grant is quite obvious. It is the highest in states like Punjab, Haryana, and Rajastan from where recruitment in the armed forces is the maximum. This is because the families of the armed forces personnel in these states form a formidable vote bank. A state like Gujarat has less recruitment which means that there is minimal political constituency from within the soldiering fraternity, hence, the low level of grant.

Since law decrees that this grant is a state subject and the centre has no authority to interfere in the legislative decision of the state, the soldier has no option but to bear the disparity as stoically as he bears the other injustices heaped upon him from time to time.

In all fairness it has to be mentioned that the case for bringing uniformity in disbursement of this grant was taken up with the states by the Ministry of Defence in 1994 vide a Demi-official letter written by the Additional Secretary Defence on April, 09, 1994 to the Chief Secretaries of all States. As a result of the letter, a uniform figure of cash grant was adopted by most states the highest being Rs 22,500/ for PVC; even though the disparity in cash in lieu for land and the annuity continued.

Unfortunately, this figure has not been changed by many states even 15 years after its application during which period three pay commissions have already addressed the financial aspirations of all government servants. States that have revised the grant have done so unilaterally.

This huge disparity does nothing to build a spirit of nationalism in our great country. In fact, it clearly indicates the political imperatives that drive different states in their decision making process even in matters concerning the defence of the country.

There are other issues of rights and privileges that are plaguing the relationship between the soldier and the nation. The OROP face-off has now gone way beyond the original demand for pensions. The much touted consciousness for national security that the Bharatiya Janata Party (BJP) has always professed has turned out to be nothing more than a myth. What the BJP has done after coming to power has fallen short of expectations. In fact, while fighting for their rights, the soldiers have gone through the major political parties. All have given only lip service and nothing else.

At least on issues like Ex-gratia payments and grants to national heroes, the present government can walk the talk rather than playing to the gallery. At least Gujarat can revise its policy since the son of its soil is now Prime Minister of India and an acclaimed fan of the country’s armed forces.

The instance when veterans returned their medals to the president followed by the very long agitation at the Jantar Mantar has caused every patriotic Indian, except for a particular breed, to hang his/her head in shame. The need to holistically address all issues being raised by the soldiers both serving and veterans and maintain their confidence has never been more palpable than now.

Soldiers are a proud race! They will not demonstrate the hurt caused by the general apathy but will bear it in their hearts. The resultant frustration will definitely impact their output negatively and this is something that the nation cannot afford.

India is heralded as a mature democracy and a rising world power. An attitude of paying only lip service to its soldiers who have played and will continue to play a major role in the nations march to the top is bound to have negative repercussions in the long run. The soldiers may not be a distinct political entity by themselves but their contribution to the national cause is very significant to say the least. Hence their requirements, that are in any case very modest, must be considered beyond the bounds of political expediency.