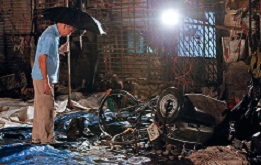 India’s soft underbelly – Mumbai, has once more been targeted by terrorism, many innocents have died and a siege mentality is once again overpowering the collective Indian psyche. There is a sense of rage against an unseen enemy, aspersion are being cast upon the government for its inability to get on top of the situation as has been done by the US post 9/11. This time round, the government and the general public have, as yet, not openly blamed Pakistan for the incident even though there are simmers about the involvement of the Pakistan sponsored Lashker-e-Taiba (LeT).

Whether direct, indirect or unintentional, Pakistan’s involvement is the recent attack is very much there and this is because maintenance of anti-India terrorist structures is a state policy so far as the Nation is concerned. Recently New York Times reported about 14000 Kashmiri Mujahedeen in Pakistan, under control the ISI, scattered across camps for future use against India. The report ascribes the information to a former Jihadi commander. This number is almost seven times higher than the Indian government estimate of 2500 terrorists in Pakistan, directed against India.

The Indian government has been very vocal about Pakistan not doing what it is promising on terrorism. In the last few months even the US has been questioning the hollow promises being made by Pakistan. Presently, the quintessential demand of the US to Pakistan is ‘to do more’ against terror outfits. There is no forward movement mainly because any demand to end terrorism poses an existential paradox for the Pakistan army. An army which has invested heavily in these elements and has developed them as strategic assets will not wrap them up until it has achieved its target or a better option comes about.

Unfortunately India is opting for passive measures to counter this very potent threat. Some sections of the Indian bureaucracy, political leadership and intelligentsia feel that Pakistan can be pressurised to drop its anti-India policy through political and diplomatic means. This is intrinsically a flawed view. The Pakistan army will never drop its anti-India policy as this is a part of its institutional ethos. Zia ul Haq, during his regime, changed the motto of Pakistan army from “ittehad, yaqeen aur tanzeem” (unity, faith and discipline) to Iman, Taqwa aur Jihad fi Sabilillah (faith, piety, holy war in the path of Allah). This has given the Pakistan army a religious reason to have enmity with India. The war is for Allah and his given path. The window for any compromise with infidel India is very narrow unless India accepts Islamic tenets in totality.

The Islamists across the world have minced no words against secular/liberal non Muslim global society. They have declared war for Islam. We should see Pakistan army and its motive against India in this regard. The Pakistani Jihadi assets, in particular, have been created, not to achieve short term strategic gains but as a first line of conflict for the Islamic ideologies nurtured by Pakistan. When the opportune moment arrives they will take Jihad into the Indian epicenter. The objective of the Pakistan army and Islamists are similar when it comes to India. The difference lies only in the means and these are also coordinated.

Today, terrorism in the Kashmir Valley is at all time low not because of a shortage of Mujahedeen’s but because Pakistan is in a tactical retreat mode. Militancy in the Valley would have kept the temperature high between India and Pakistan and this would have adversely impacted the FATA operations. The world has also become less tolerant of such militant practices. Thus the political support for Kashmir that Pakistan had garnered is, in the present context, not in likely to pay the necessary dividends; hence the pause in the Valley. However, the structure is very much intact, so is overt activity to keep the flame alive. In the meantime Pakistan is waiting for things to settle down before chalking out a new plan for restarting militancy in the valley.

The 26/11 attack in Mumbai came as a shock for the world, now it is a matter of time before one will see a new form of international Jihad, particularly against India, that will further surprise one and all. It will be based on the kind of mindless violence as has been witnessed in Mumbai a few days ago. Who can attribute some logic to the attack? What was the intention of the perpetrators? There is ambiguity which raises a sense of insecurity and this is what the new lot of terrorists are looking for – weakening of the psychological will of the people through ambivalent violence. Similar plots are being unearthed worldwide at regular intervals especially so in the Western countries.

Unless Pakistan does not generate the will to forsake its unsound strategic doctrines and views its homegrown Mujahedeen’s as enemies of mankind, not much can alter the Jihadi onslaught that is taking place in India and in a much lesser scale, across the world. Pakistan has to shed its double talk, its charades of being a victim of terror and take credible action to dismantle its terror factories. In case it does not then India will have to face many more incidents like the ones that have taken place in Mumbai. No amount of policing and intelligence can deter a determined terrorist from striking especially so when he can plan at leisure and without fear and when he has no dearth of resources. The base has to be dismantled and unfortunately, Indian cannot dismantle the base; only Pakistan can. In order to move forward, India needs to make known to the world the incremental steps from diplomacy to outright conflict that she will take to realise the imperative of dismantling terror factories based in Pakistan. In the meantime, it would be prudent to prepare for outright war.