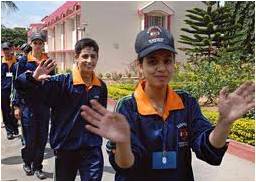 That the state of Jammu and Kashmir has been in the grip of a destructive and violent separatist movement for the past two decades is known to all. This climate of perpetual disruption and destruction has taken its toll on the human psyche and the physical infrastructure. This is a conclusive and tragic reality that can be felt and understood only by the denizens of the region who have experienced this agony first hand. During times of political and administrative turbulence the first thing that takes a hit in a region is its economy; Jammu and Kashmir was no exception. Both the economy and infrastructure of the state took a beating during the period when terrorism was on the ascendancy. More critical was the complete breakdown of the administrative machinery.

Very few people know or acknowledge that the only agency that consistently made an effort to stem this rot and pull the state out from the developmental coma is the most vilified Indian Army.

Understanding the hardships being faced by the population due to the lacuna in the administrative efficacy and with the intention of restoring normalcy in the region, the Indian army initiated Operation Sadbhavna as early as the year 1991. The intention was to offer a friendly helping hand to the population left wanting in terms of civic and social infrastructure due to no fault of theirs. Reconstructing the image of the security forces in the mind of the common man from the ogres that they had been painted into to the positive performers and builders that they actually were was, no doubt, an additional goal.

Under the ambit of Operation Sadbhavna, the Indian army initially buttressed the flailing social sector in the state. To quote an example, Jammu and Kashmir is a state which has less than four teachers per government school. During the times of peak terrorism most of the government teachers preferred being posted at places that were close to their homes and easy to access, unfortunately this malaise continues to persist. The result is that government schools in inaccessible areas are bereft of teachers. In many other places schools were burned down by the terrorists. The Army, under Operation Sadbhavna, opened a number of Army Goodwill Schools especially so in remote inaccessible regions of the State with the intention of providing quality education for a nominal fee to the deprived children. The Army through this effort not only provided education in areas that were unserviced but also generated employment for trained teachers

Army Goodwill Schools are just one example of the efforts being made under the aegis of Operation Sadbhavna. In an effort to involve the youth in gainful and constructive activity, the army has established a number of youth employment guidance nodes which provide the young boys and girls information and awareness regarding employment opportunities available to them. Vocational training centres have also been set up to train to the local population particularly the women in a trade of their choice and interest. In these centres, the teachers employed also hail from amongst the local population, making them more acceptable to the people in addition to creating more employment. The army is also making efforts to make the population of the region a part of the rest of the country’s phenomenal growth trajectory. With this intention people from the region are introduced and exposed to other parts and people of the country. The idea all along was to generate positive vibes in an otherwise morbid and negative environment.

The efforts made by the army created a positive impact and brought in encouraging results.

The local population, particularly those living in remote and physically disadvantaged areas view the army as some kind of a panacea, an answer to all their problems. They approach the army for all kinds of help ranging from building of a road to providing a bridge to even helping in availing a loan from the

civil administration. The dependence on the army is explained not only by its accessibility and willingness to help but also by the promptness of its response and the element of honesty in its approach. The general image of the civil and political administrator is that of one who is either too busy or otherwise unavailable and largely unconcerned and corrupt. The army on the other hand scores positively on all of the above parameters.

Unfortunately, there are voices that chose to denigrate the efforts made by the army in the restoration of normalcy in this region. Now things have taken such a sad turn that even issues like the killing of Sarpanches are being blamed on Operation Sadbhavna, some news reports have suggested that terrorists are targeting Sarpanches because they are in communication with the army with regard to welfare activity under operation Sadbhavna. This is clearly a diabolic plan to isolate the grass root leadership from the Army. It has been laid out by those who are visibly scared of the strong bond.

The army has in the people’s interest performed much beyond its given duty and mandate at considerable cost of time and labour. One must realise that in the course of such endeavours the army not only diverts manpower and productive man days but also considerable funds to the cause of the civilian population. In fact, it has been generous in sharing its resources with the local population. All this is being done with no political mandate in mind. Detractors of the social work that the army is doing should perhaps take a reality check by walking down the countryside and talking to the population at the grass-roots so that the propaganda managers of inimical forces are exposed. I can speak with reasonable authority since I have seen and experienced the situation on ground.