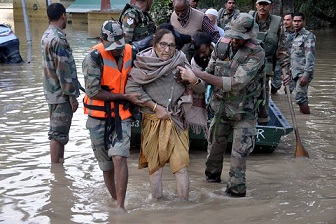 Dr. Simrit Kahlon
 In a ludicrous and pathetic effort to gain centre stage, Kashmiri separatist Yasin Malik, on September, 13, led a gang of unscrupulous elements and tried to derail the rescue and relief process launched by the Indian Army (Operation Megh Rahat) in aid of the flood hit regions of Kashmir.

In an inhumane act, he and his set of criminals forced ailing lady patients to get off an Army relief boat despite strong criticism of the shocking move by the women in the area. Yasin Malik told the Army patrol to leave the patients and withdraw.

On September, 13, noon, two army vehicles parked at Jahangir Bridge and offloaded rescue boats to go towards Lal Chowk on a mission to provide relief stores and return with people requiring urgent evacuation. As they left, a gang of hoodlums congregated on the army vehicles and stoned them. The Army detachment comprised of armed troops, yet it followed the dictum of patience and did not open fire on the gangsters, preferring to disengage and relocate to a nearby area till the crowd dispersed.

When the boats returned, Yasin Malik appeared from within the mob and told the boat patrol to disembark the patients and leave. He claimed the Kashmiris do not want the Army rescue efforts to continue. Women in the boat and in the vicinity protested loudly at this insane act by a bunch of goons even as Mir, an aide of Yasin Malik, shouted at the ladies in Kashmiri and forced them to be silent.  The rescue team was also carrying arms but again, following the spirit of patience which is a command diktat to all soldiers operating in these challenging circumstances, the patrol withdrew.

In a second instance of perfidy, Syed Ali Shah Geelani, has appealed to Pakistan (Pakistan army) to come to the aid of the Kashmiri people. The government of Pakistan and the Pakistan army cannot do anything for their own people, what would they do for Geelani. The fact, however, remains that he wishes to created problems for the forces involved in the relief and rescue operations.

The Army has placed the highest priority to rescue of civilians stranded in the humanitarian crisis situation despite suffering tremendous losses and damage to its own camps. There has been loss of military equipment and personal belongings, but soldiers and officers have continued functioning despite losing all that they possessed less the clothes they were wearing at the time of moving to dry land. Undeterred by their personal losses they have worked day and night to meet the challenge. They have lived up to the Army ethos of Service before Self.

Yasin Malik was not seen, not heard all through the worst days faced by flood hit Kashmir since the beginning of September. Nobody knows where he was hiding himself. Geelani had also disappeared all through the worst days of the floods. There was not one volunteer from their organisations even in a makeshift boat trying to put in a penny’s worth in the rescue and relief effort. Now when the waters have receded and there is not much danger to their life and limb, they have surfaced with their dirty tricks department.

The separatists are terrified at the prospect of their irrelevance in view of the international appreciation of the massive flood relief effort put in by the Indian Army with sterling support from the state government, national disaster relief force (NDRF), Indian Air Force, Indian Navy, JK Police, paramilitary forces and a host of volunteers.

The separatists and their goons have proved with their inhumane act that they can go to the extent of playing with the life of ailing women for misconceived political gains. It is surprising that they consider the people to be stupid enough to be taken in by their petty egoistic squabbles at such a critical time. The sooner they understand that they can no longer lead the people up the garden path the better.

These are not times to point fingers and calculate who has done what. They are times when every individual and collective effort counts. It is the will and the desire to put in an effort towards the collective cause which is important.  In this the separatists have failed dismally. Instead they are doing everything possible to scuttle the relief process and add to the miseries of the poor people,

By not joining the rescue operations the separatists have once again demonstrated their weak, fatuous, sadistic and fragile egos. They have shown how badly they are under the control of their foreign masters. They cannot even reach out to their people in the most terrible circumstances for fear of reprisal from their handlers across the border. The people understand all this and will respond at an appropriate time.

For the moment separatists should not be allowed to distract attention from the task at hand for which reason it is best to ignore them. However, if the likes of Yasin Malik and Syed Geelani create physical hurdles in the relief process it would be best to put them behind bars where they belong.